First Austria’s highest lifts at the Pitztal glacier moved their opening date forward from the 25th to 18th September due to what they say are great snow conditions on their glacier.

Now Solden, which initially said it would open early October but hoped to open sooner if conditions were good, has moved their opening date forward three weeks to this Friday, September 10th. Lifts will start turning on the Rettenbach glacier from 8am.

There was fresh snowfall in the Alps up on glaciers in late August and at the start of this month.
Four centres are currently open at Saas Fee, Zermatt/Cervinia, Hintertux and Passo Stelvio in Italy. 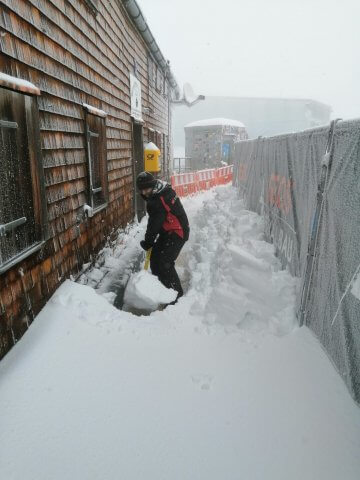 (Late-August Snowfall on the Zugspitze Glacier in Germany, opening in November)

Other centres that have so far confirmed September openings include Italy’s Val Senales on the 17th and a fourth Tirol glacier, Kaunertal, on the 24th. It mean half of the northern hemisphere’s open ski areas are likely to be in Tirol region through September.

A fifth Tirol glacier, the Stubai Glacier, may also open soon, in an online statement it says, “ The start of the new ski season is planned for mid-September 2021, depending on the current snow and weather conditions.”

A sixth Austrian glacier, the Molltal, this time in Carinthia, is expected to re-open sometime this month too.