Sainte Foy is located in the heart of one of the world’s great ski regions, with giant neighbours like Les arcs, Val d’Isere, la Plagne, Tignes and La Rosiere.  But it has carved a niche as a very different ski destination.  It is a much smaller, intimate, high-quality destination.  You won’t find any high-rise concrete blocks here, only developments sympathetic to the timeless architectural style of the region.

It is also famously affordable – a six-day lift pass costing a little over half that of its larger neighbours.

The ski area is smaller than its giant neighbours too but has managed to successfully attract two separate skier markets, which sometimes overlap. The groomed runs are great for beginners, intermediates and families but Sainte Foy is also famed for its off-piste powder, so expert freeriders love it too. Sometimes all of these different skier types are members of one mixed-group and for them, Sainte Foy is ideal for easily getting together between runs.

Sitting on the border with Italy, the resort has a reputation for its normally excellent natural snow cover, credited to cold air travelling in over the Italian Alps before dumping on Sainte Foy.  Better still there’s the added benefit that its lower slopes are sheltered from the wind.

Sainte Foy’s compact and uncrowded ski area offers just over 1,000 metres of vertical ranging from a snowsure 1550m to 2620m and extending to offering 800 hectares of forests.

Most of these slopes have a reputation for immaculate grooming but three (Natur’Morion, Natur’Crystal and Shaper Paradise) are deliberately left ungroomed for a freeride experienced with the security of being on a marked run.

The fact that Sainte Foy’s slopes are both in a naturally sheltered location and on wooded slopes for added protection from the elements make it a popular choice on stormy days for visitors from bigger neighbouring resorts like Les Arcs, La Plagne, Tignes and Val d’Isere nearby where high altitude glacier runs are more or less unskiable in such conditions.

Sainte Foy is a great choice for beginners as the village ski slopes can be accessed free of charge by adults and children alike.  There are two easy-to-ride conveyor lifts, Marmots and Gallopins, providing access to the two green-rated nursery slopes of the same name. There are then seven blue slopes for novice skiers to progress on to once able to turn and stop.

Families will also appreciate the funnel-shaped ski area layout which essentially means that all the slopes on the mountain eventually lead back to the resort centre. Also, the chairlifts are equipped with extra safety features for children.

At the other extreme Sainte Foy has managed to simultaneously develop a reputation for its off-piste freeride terrain, in part because so few advanced skiers tend to stay here, which, along with its reputation for powder snow and tree skiing, normally means lots of untracked terrain to enjoy. For families, there’s the added bonus that beginners and experts can access the easiest groomed slopes and some challenging off-piste very close to one another.

The three ungroomed slopes, all black runs, have been designated Free Zones and although marked and patrolled skiers and boarders are still recommended to carry standard avalanche safety equipment and know-how to use it

Off-piste skiers and boarders are advised to make use of guiding and tuition available from local mountain guides, ski schools and qualified, independent instructors to find the best routes as safely as possible.  They can also lead you to high altitude ski touring up to 3,000 metres altitude, high above the highest lifts, and even offer heliskiing over the border into Italy. 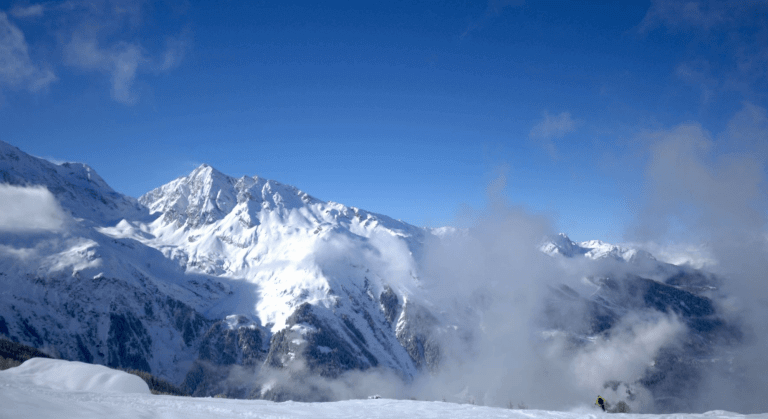 Part of Sainte Foy’s attraction is that it is unspoilt with small hamlets rather than a big resort base.

That means you’ll find authentic, enticing, locally-run restaurants and shops, but you won’t find a huge choice or much nightlife. So if a buzzing apres-ski scene is important to you best look elsewhere.

Although it has remained a small resort compared to its neighbour, Sainte Foy has been welcoming skiers for more than 90 years, so it is not a new arrival on the ski scene.  Although the most developed part of the resort is Sainte-Foy village itself, there are many small hamlets in the wider area, some of which are home to buildings centuries old, and some wonderful restaurants you can ski down to, sometimes requiring a guide.  Le Monal, for example, traces its heritage back to 1888 and through six generations of the same family.

Otherwise, there aren’t too many facilities beyond skiing either, on or off the slopes, but there are others things to enjoy, including guided snowshoe walks on various themes – or a self-guided option passing five information boards with information on the plants and wildlife of Sainte Foy.

There’s also a free toboggan run to whizz down on the Galopins village slope and if you have a lot of euros in your pocket you can book a helicopter tour of the region.

Are you looking to book ski holidays in Sainte Foy?

The Pistes in Sainte Foy Tarentaise