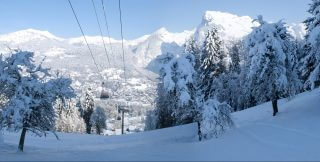 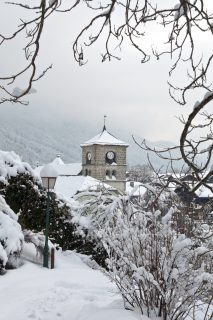 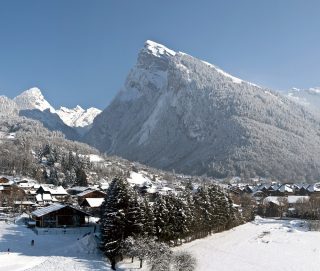 Samoëns is a traditional village resort beneath the vast Grand Massif ski area, which rates as the fourth biggest ski region in France and one of the largest in all of Europe and indeed the entire world.

The village is located in the Haute-Savoie region, just a few kilometres from the Swiss border and is known as one of the most charming, traditional and atmospheric ski resorts in the Alps. Like many old villages that have developed into ski resorts, it has a long history as an agricultural centre, an identity which continues today. The crucial difference here though is that the locals have been superb ‘stone cutters’ for centuries and the result is that there’s a lot of beautiful architecture around the village making it feel a very special place to stay. Many of the old buildings, some dating back to the 13th century, now house fabulous shops, cafes and restaurants.

The village, which is very quick and easy to reach from Geneva, 70km (43 miles) away, is growing fairly quickly as its attractions get better known and there’s an ever bigger choice of modern, well-designed and equipped accommodation available.

The resort is quite low lying at 670 metres altitude and the skiing is accessed via two gondola lifts, one of them new from winter 2020-21 and now the fastest lift in France, taking skiers up to  Samoëns 1600.  Here there’s a superb beginners area and more lifts and pistes linking to the grand Massif region and the neighbouring ski resorts of Flaine, Sixt, Morillon and Les Carroz ski area proper begins.  The entire ski region is powered by renewable energy. 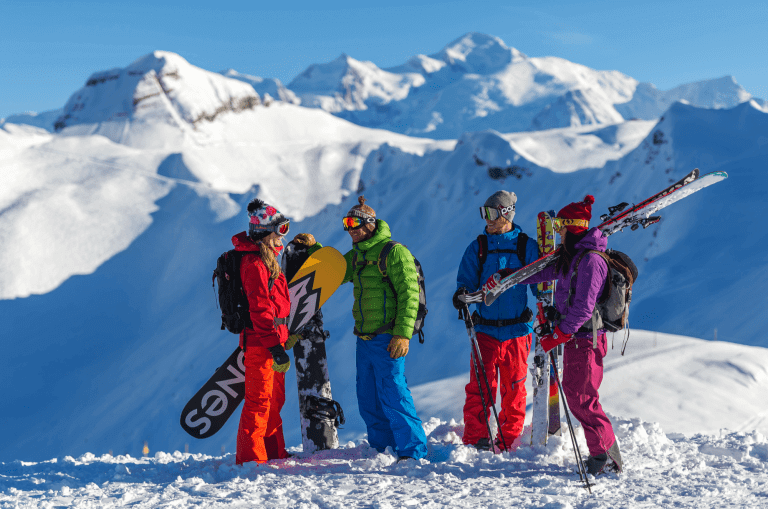 The heart of the ski area is a vast powder bowl with dozens of runs descending and fast lifts back out, but from the rim of this bowl, there are also fabulous long descents (and we do mean long – up to 12km!) down towards the valley resorts including Samoëns itself. The magnificent 14km long Cascades piste is the most famous, taking you away from lifts and other signs of civilisation which offers spectacular 360-degree views of the surrounding mountainscape.

Whilst this is all great for intermediate and advanced skiers, Samoëns is also a good choice for beginners with one of the largest nursery slopes area in the Alps easily reached by the gondolas up to Samoëns 1600.  There’s a special low-priced pass available for beginners.

Families benefit from a great choice of easy blue and green runs, plus some specially themed fun slopes and zones aimed at children.

It’s also a ski area with a great snowfall record, thanks in part to its proximity to Mont Blanc and the fact that more than 80% of the slopes have a northerly exposure. Most seasons it closes in spring with the snow still lying metres deep on the ground.

There’s been skiing here for more than a century, the earliest reported meetings dating back to 1912. The first ski lift was installed in 1951.  Originally those staying in the village had to jump on a shuttle bus up to Vercland (800m), a short distance from the resort, where some bright red gondolas carried skiers up the slopes. However, a new gondola, The Grand Massif Express, was installed more recently from the heart of the village so that’s no longer necessary. But the Vercland option remains and in December 2020 a swish new gondola with big 100 passenger cabins was unveiled there to help cope with the growing demand.

There’s plenty of terrain for expert skiers too. including some great freeriding, guided ski touring and even the option to go heliskiing. For those with transport looking for still more, day trips from Samoëns to other leading resorts are easy too. It is just an hour from Chamonix. 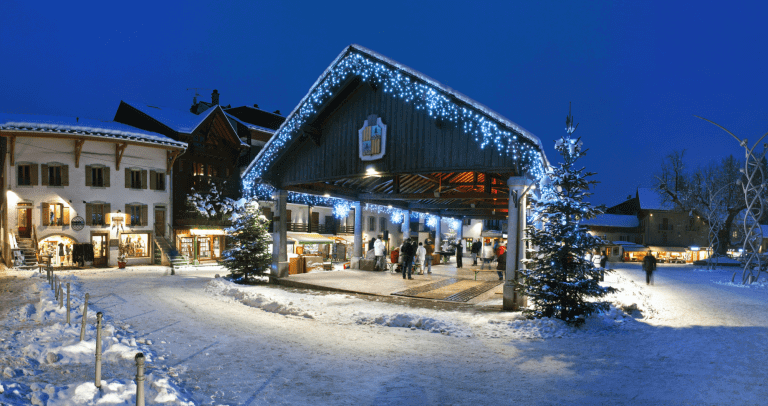 Visitors are drawn to its central square and picturesque streets created over several centuries of a history shaped by the local stone carvers. Here you’ll find shops selling locally produced food and handicrafts and some fabulous cafes and restaurants.

Must-see sights include the covered market halls La Grenette which were built in the 14th century local Notre-Dame de l’Assomption church, bronze fountain and a big tree, known to have been planted in 1438 to celebrate the granting of rights to the villagers of local lands by the Duke of Savoy, and known as Gros Tilleul. Beyond that, there are interesting carvings hidden away around every corner.

If all that wasn’t enough Samoëns is also home to a unique alpine botanical garden.  Created in 1906 this has grown to include nearly 5,000 plants from 2,500 different species and spreads over 3.7 hectares has a 3km walk through its heart.

Besides wandering around the village, there’s lots to do off the slopes. Winter yoga classes are on offer – increasing the benefits of yoga by adding some cold temperatures outdoors and there are several spa facilities in some of the new accommodation complexes that are open to all.

In terms of learning about more of the village’s heritage guided tours on the stone cutters are organised weekly and there’s a different activity every day organised by the tourist office. Visits to local cheese farms are very rewarding for fans of French fromage.

On the more active side, you can do more than just admire the Giffre river that runs through Samoëns, you can ride along and in the freezing water (in a thermal suit) on a whitewater raft, canoe or hydrospeed.

Back on the snow, you can try activities like biathlon (cross country skiing than a visit to the rifle range), electric fat biking on snow (day and night), snowshoe hiking, snowmobiling, sledge runs, and Nordic walking.

There’s also paragliding, horse riding (or you can be towed behind a pony on your skis or a sledge), mini-train rides, an ice skating rink, winter mountaineering and ice climbing are all on offer.

All in all, Samoëns has everything you could ask for from a ski destination, and more.

Are you looking to book ski holidays in Samoëns?

Book your ski holidays in Samoëns now with Erna Low. 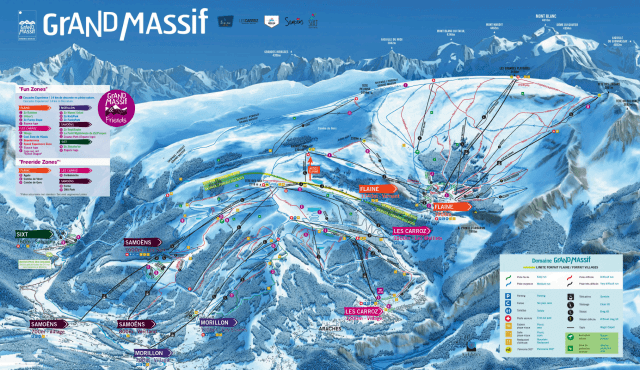 The Weather Forecast In Samoëns

The Pistes in Samoëns