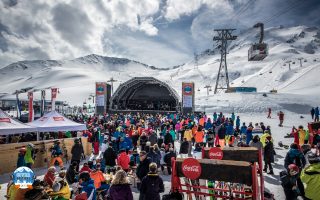 The centre of one of Switzerland’s largest, oldest and best known ski areas. A large town, split in to two (Davos Dorf and Davos Platz), year round tourism/conference centre, world class facilities. Davos has for centuries been a major health centre and today has a hospital and three clinics, four of them specifically for children.

Davos today is the largest and most successful of the first breed of classic ski resorts. Europe’s highest town has successfully consolidated its significance in the early years of winter sports by constantly improving its ski area so that it has remained one of the world’s best. At the same time developments in the town itself have kept ahead of the pack and of equal or greater value to Davos are its world class medical institutions and its international status in playing annual host to world leaders in staging the World Economic Forum.

The Davos local authority, which includes the town, outlying villages and countryside, is the second largest area within Switzerland, larger even than the city of Zurich. The many facets of this remarkable resort mean that tourist office marketing slogans such as “Europe’s most extensive alpine resort” are not exaggerations. The town spreads along the valley floor for several miles with the more concentrated western section named Davos Platz, and the eastern Davos Dorf. The architecture is generally of grand design rather than being particularly picturesque, however the whole is attractive in its way, and the scenery around certainly spectacular. The main off-slope leisure facilities are nicely placed between the two halves and the major access lifts to the ski slopes are also well spaced throughout the town.

Davos’s growth as a mountain sports resort developed out of its existing status as a leading health resort in the late 19th and early 20th century. In years gone by Davos provided tuberculosis sufferers with sanatoriums, but today there are highly specialised institutes providing, in particular, therapy for allergies, respiratory illnesses and dermatological complaints.

At the turn of the last century up to 700,000 overnight bookings a year were being registered from visitors mainly for the health benefits (this was an increase on an annual figure of two visitors in 1866). The resort’s importance as a pioneer in winter sports cannot be under stated however: Sir Arthur Conan-Doyle, creator of Sherlock Holmes, is thought to be the first Scot to travel on skis, travelling from Davos to Arosa and the world’s first T Bar lift was installed at Davos in 1934.

Experience Davos Klosters for yourself with their latest resort video.

Wondering what the skiing is like in Davos Klosters? Take a look at the full ski area piste map here.

The Weather Forecast In Davos

The Pistes in Davos Klosters