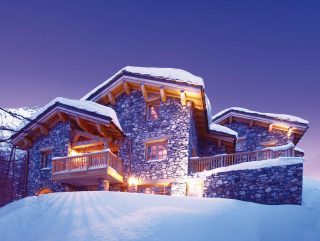 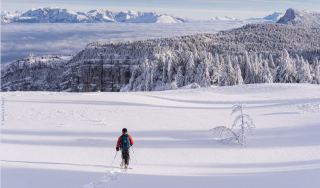 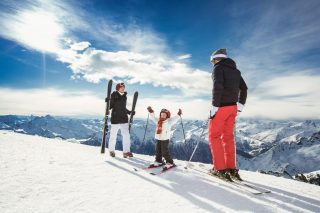 One of the world’s top resorts, Alpe d’Huez offers one of the greatest unbroken verticals in the world. Built above the original village of Huez, the resort has expanded in all directions over the past 20 years. There is a huge beginners area directly above the resort and those going on to the top of the lifts will be able to see a fifth of France, on a clear day, from the top station.

Alpe d’Huez sits somewhere between those big resorts that have been built at altitude since the 1960s and those traditional villages down nearer 1000m. It is an altitude resort, but it dates back the best part of a century so has bags of character as well as a snowsure altitude and a huge ski area – a triple threat! The resort was first developed in the 1920s and its first lift, opened in 1936, was one of the first in France (or anywhere). Now, a century later, it’s a highly renowned resort, home to world-class events. One of the largest music festivals ever to hit the Alps, Tomorrowland Winter, took place here in 2019, with future editions set to continue at the resort.

Besides its spectacular skiing Alpe d’Huez is famed as a key stop on the Tour de France, thanks to its famous (or infamous) 13.8km long hill climb up to the resort with an average gradient of 8.1% and 21 hairpin bends – it’s much easier in a comfortable transfer coach, car or taxi.

That skiing in Alpe d’Huez is quite special. The resort lies at the heart of the ‘Alpe d’Huez Grand Domaine Ski Area’ which also contains smaller traditional villages below including Vaujany and Oz-en-Oisans, a truly vast ski region with some 250km off fully inter-linked pistes, including, most famously, the remarkable Sarenne run, officially the world’s longest black run and certainly a glorious descent whether you feel it is steep enough for its black grading or not, descending 10 miles from the top to bottom of the slopes, a lift served vertical of 2,230m (that’s world top five, no less, for size-of-vert) – crowned by snowsure glacier skiing and one of the very biggest in the world.

But the Sarenne run is one of many different long, long runs that are possible, and most accessed by fast modern lifts. Many options take you down through those little villages on long blue or red runs where you might stop for a beer or for lunch before heading back up. There are plenty of black options too, with 17 marked trails along with endless off piste routes that a guide would be happy to take you to. The ominously named ‘Tunnel’ is the most infamous pisted descent (although it only has that name because you access it through a tunnel), but there are many more.

At the base of the slopes there is also a vast beginners area in a huge area of gentle slopes served by multiple lifts. The full featured terrain park and a fun sliding zone with toboggan runs is also here.

The resort of Alpe d’Huez itself is built on a gentle slope and in a roughly triangular shape with the hub of the lifts up at the apex, but with pistes and lifts running along each side of the triangle so you can ski down or get a lift up from most accommodation.

The village, which has grown up above the old village of Huez, is relatively compact with everything within walking distance, although it is also one of the bigger resorts so there’s a regular shuttle service to get you to the slopes or around the resort if you don’t want to walk at all.

‘Vibrant’ and ‘eclectic’ could be used to describe the atmosphere and the ambience here. There’s a swimming pool and ice rink in the heart of the resort surrounded by shops, bars, cafes and restaurants. There’s a big choice in all categories and although most are locally run, you’ll find sushi bars and a modern supermarket along side those traditional boulangeries and patisseries we love, plus plenty of creperies and traditional Savoyard restaurants (even though this is actually the Dauphiné – Isère region).

Whilst some of the better known French resorts have been adding five star hotels and Michelin starred restaurants with prices to match, Alpe d’Huez has been busy keeping it real and keeping it affordable. Accommodation is mostly in 1-3 star hotels and apartments but Alpe d’Huez does now have a lovely four star apartment complex option, Le Cristal de l’Alpe, about 100m from the nearest lift and right on the edge of the resort centre.

One more box tick for Alpe d’Huez is how painless it is to get there. If you fly in to Grenoble (a pleasantly uncrowded airport compared to most options for the French Alps) you can expect to be in resort in little over an hour on a good day, perhaps 75 minutes on average – iut’s less than 40 miles away.

It all adds up to the complete picture of Alpe d’Huez as a very ‘real’ snowsports destination boasting both true ski heritage and relaxed atmosphere that help you get in the holiday mood and really enjoy the best of French skiing without any of those possible downsides.

Experience the resort for yourself with the latest Alpe d'Huez resort video. 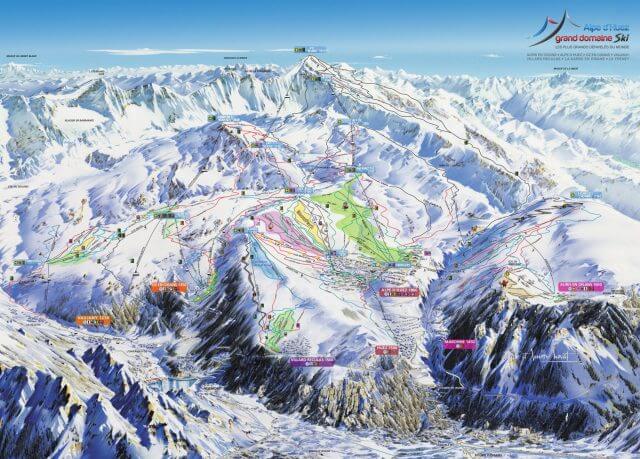 The Pistes in Alpe d’Huez