Beaver Creek is a fascinating resort in the evolution of the global ski industry. It has many claims to fame, perhaps most notably that, having opened as recently as 1980, it’s one of the ‘youngest’ of the world’s great ski areas. As a result of its modern evolution it is also sometimes described as being “the first resort to be designed by computer” (and if so, it’s a good argument in favour of computers!).

It’s a high altitude resort, with a summit elevation of 11,440 ft (3,488 m) and a vertical rise of 3,340 ft (1,018 m). Of the 150 trails, many are suitable for beginners and intermediates, allowing for easy progression. Indeed, the Haymeadow Express gondola is dedicated to less experienced skiers, ensuring that beginners of all ages can safely access beginner-only trails. For the 2020/21 winter season, an entire new area is scheduled to debut. The McCoy Park area will add 250 new acres of lift-served terrain to Beaver Creek, in the form of a family-friendly learning area with 17 trails.

The most interesting fact is that Beaver Creek, which was built by Vail, 18km (11 miles) away to the east, to be “America’s most elegant resort”, is located in the territory which Vail’s founders had chosen as first choice for Vail itself. However, back then in the 1950s, the rancher who owned the land was happy with his lot and didn’t want to sell. It was 16 years later, in 1972, that Vail, by then one of North America’s leading resorts, succeeded in purchasing the land where Beaver Creek now sits. Work began in 1977 and, since the resort’s opening, it has become the epitome of the general popular perception of high class, high taste lodging, dining and other facilities with an exceptionally well designed resort and lift system.

In conjunction with Vail, Beaver Creek has hosted the Alpine World Championships three times in its short history, most recently in 2015, another unique achievement. The ‘Birds of Prey’ downhill course constructed for the event has quickly established itself as the toughest downhill in North America and on a par with the classic Alpine world cup runs, generally perceived as tougher than anything North America could offer prior to this new run opening. ‘Birds of Prey’ is now considered one of the top three downhills in the world.

Beaver Creek also claims to offer ‘European style village to village skiing’ – a rare phenomena in North America where only Stowe and Smugglers Notch in Vermont are as yet linked together by ski lifts, although others could if they chose to be. In Beaver Creek’s case the ‘villages’ it is linked to  (Arrowhead and Bachelor Gulch) have had to be built from scratch by Vail, just like Beaver Creek.

Experience Beaver Creek for yourself with their latest resort video.

Wondering what the skiing is like in Beaver Creek? Take a look at the full Beaver Creek piste map here. 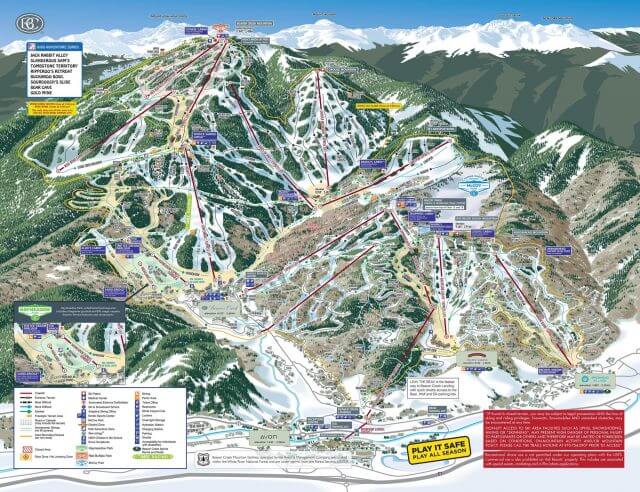 The Weather Forecast In Beaver Creek

The Pistes in Beaver Creek