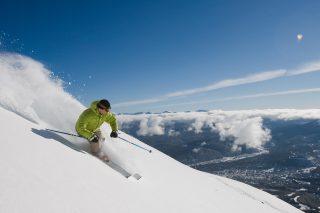 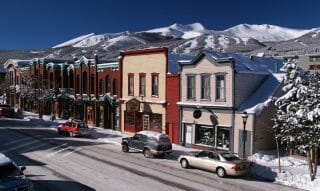 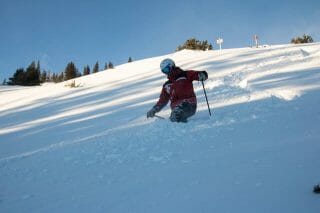 Breckenridge is one of Colorado’s most popular resorts, with North America’s highest skiing since 2005, when the resort opened the world’s highest chairlift. Breckenridge is the opposite of a purpose-built resort, being instead an original mining town with 171 listed buildings. It is the most popular US destination for European skiers and is consistently one of the three most popular ski resorts in the US in terms of skier visits with somewhere around 1.5 million annually. The skiing is served by around 34 lifts and spreads over lift-linked mountains with double-black diamond bowl and chute skiing above. The area is spread over four peaks, spanning 2,908 skiable acres with a vertical drop of 3,398 feet.

Off the slopes its a busy and vibrant resort with an excellent range of eating, shopping and other leisure facilities, made all the more pleasant by the backdrop of historic buildings.

The resort’s history is a long one – with the Ute Indians knowing it for around 10,000 years as Nah-oon-kara before European settlers discovered Gold in the area in August 1859. It then took less than a week for a town of 360 acres to be established and for more than a thousand miners to arrive.

The Breckenridge Ski Area first opened in 1961 with two chairlifts serving a handful of runs on Peak 8, operated by a timber company. After a Denver businessman set up Breckenridge Ski Corporation in 1966 it was bought and owned by Aspen for almost two decades up to 1988 during which time the resort opened Peaks 9 and 10, introduced snow making and installed the world’s first high-speed quad, starting the on-going high speed lift technology revolution in 1981.

Breckenridge broke the 1 million skier visits record in 1988 when the resort was sold by Aspen to a Japanese company. In 1993 Peak 7 opened and a company called Ralston Purina bought Breckenridge from the Japanese owners. This company merged with Vail Resorts in 1997 to form the largest mountain resort company in the US, owning Vail, Breckenridge, Keystone and Beaver Creek.

Experience Breckenridge for yourself with their latest resort video.

Wondering what the skiing is like in Breckenridge? Take a look at the full ski area piste map here 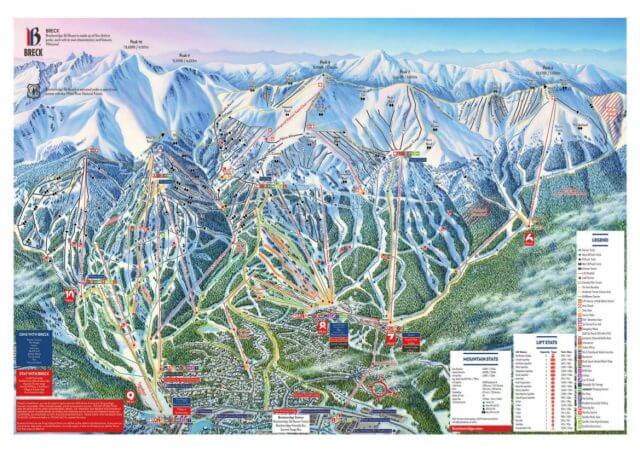 The Weather Forecast In Breckenridge

The Pistes in Breckenridge