A new lift and a new lift pass will complete the connection between Austria’s huge Saalbach ski region and the Schmitten ski area at Zell am See next winter to give a combined area of nearly 350km of slopes, but the jury is still out as to whether this can be considered the new biggest ski area in Austria… yet.

The current largest area is the Arlberg around St Anton and Lech Zurs, with 305km of runs.

However the opening of the new “zellamseeXpress“ gondola lift in winter 2017 was the first step in the process of connecting the Schmittenhöhebahn with the Glemm valley with a  3.5 kilometre long descent created. 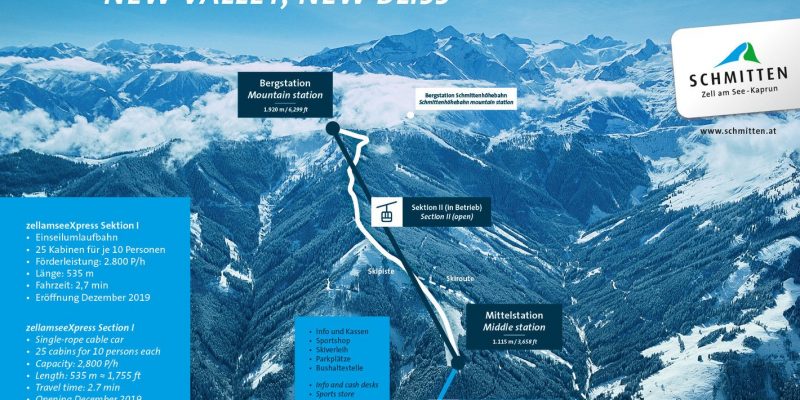 Now the lower section 1 of the ZellamseeXpress will open on 7th of December 2019 meaning that from the 2019/20 winter season, skiers and snowboarders arriving at the connection on skis from the Saalbach side on the area’s blue piste 68 will be transported directly from the valley station in Viehhofen into the Schmittenhöhe ski region above Zell am See via the 10-person gondola.

However, travelling in the opposite direction from Zell am See, skiers need to take a short bus ride from the gondola’s base station to connect back into the Saalbach network as there’s no direct lift back from the bottom of blue run 68 into the Saalbach ski area (bottom left of the piste map below). 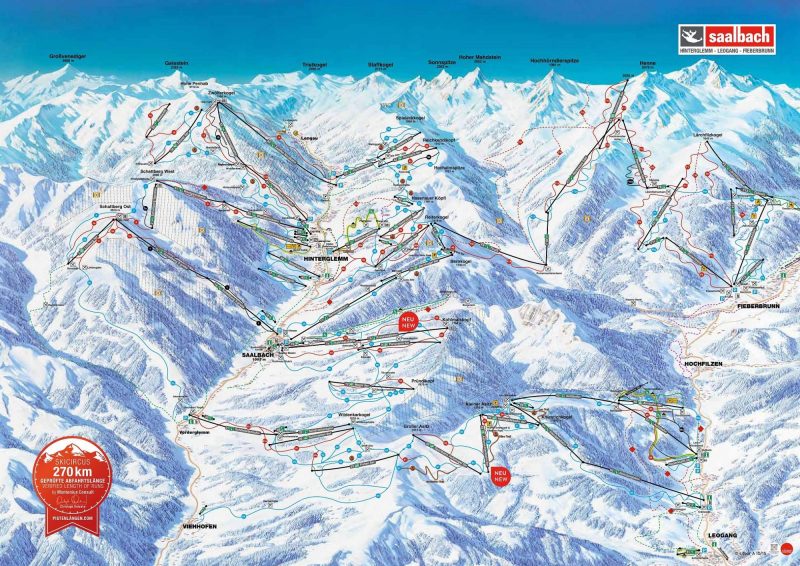 Some industry insiders say that until that lift direct from Viehofen into Saalbach’s lift network is completed, the two areas can’t be considered properly connected.  The two ski areas themselves are not promoting the area as fully linked, with another reason, insiders say, being that there’s no snowmaking on the blue run number 68 down to Viehofen meaning it is not always open and again the resorts don’t want to promote the link until it is fully two-way and more snowsure – probably a few years away.

However the international independent expert in ski-area measurement, Christoph Schrahe, says that in his opinion because it will be possible to ski the connection in at least one direction it will be a connected area from next winter and he has put the combined piste length at 345km.

Mr Schrahe reports the area is the fourth biggest in the world by his accurate measuring system,  behind Les Trois Vallées, Paradiski and Sella Ronda/Marmolada.

In any event the Zell am See area is currently going for a figure of 408 kilometres of slopes and 121 lifts in its publicity, by including the unlinked Maiskogel-Kitzsteinhorn ski area above Kaprun that’s part of its ski area. The resort is launching a new lift pass, the Ski Alpin Card, to cover the combined 408km area.