New lift connections that will make it possible to travel between the St Anton and Lech sides of the Arlberg ski region will be completed in time for next winter, the region has announced.

The new connections will make the Arlberg region by far Austria’s largest interconnected ski area with 305km of ski slopes served by 87 ski lifts.  These figures will also put the area in the world top 10 – possibly top 5 – for size, by most measures.

There will be four new lifts in total with the main lift, which has been christened The Flexenbahn (Flex Lift), linking Stuben on the St Anton side to Zurs on the Lech side.

The region will invest  45 Million Euros (£35m) in the project which will see the new Trittkopfbahn I lift from Zürs lead to a new intermediate station, from where skiers can continue up to the new  Trittkopfbahn II station or take the new Flex lift to Alpe Rauz in Stuben where a fourth new lift, the Albonabahn II continues on.  The new lifts will make all points of the entire Arlberg region quick and easy to access, the lift company says. 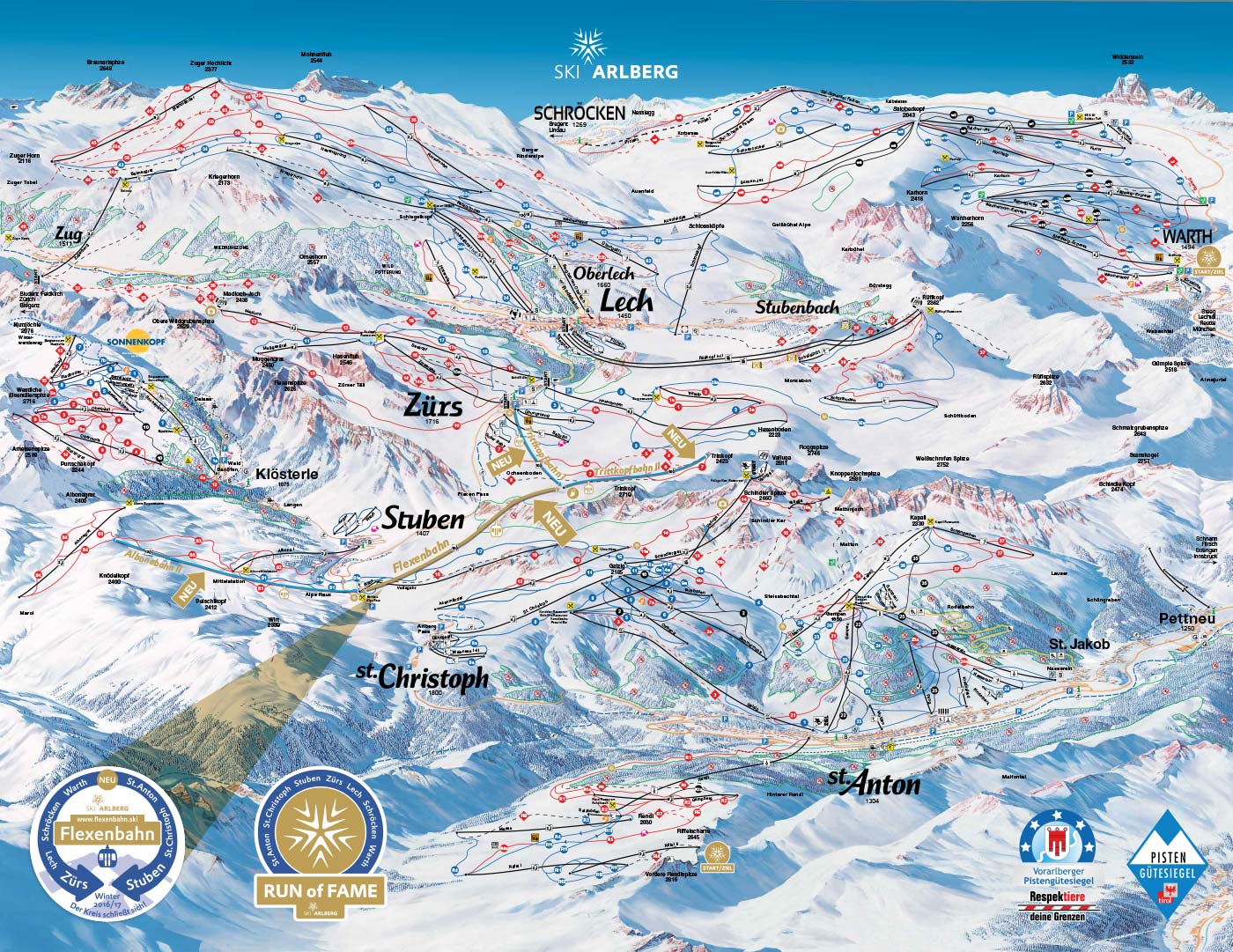 The Flex Lift will be a gondola with cabins h capable of holding 10 passengers on the just-over 6 minute journey.  It will have large panoramic windows to take in the spectacular views of the Arlberg Pass and it’s capacity will be 2,400 people per hour.  A 1.8 kilometre long piste descending 562 vertical metres will also be created as a return route.

To add a bit of extra excitement to the new connection the Arlberg is launching a new ‘Run of Fame’ that will allow skiers to cover up to 65 piste kilometres around the huge circuit and descend 18,000 metres of vertical in the process.

The route will extend from recently connected Warth to the north via Lech and on using the new Flex lift to St. Anton / Rendl in the south of the region, covering the entire ski Ski Arlberg area.

The region has given the run its own website and has already announced a new “Hunt of Fame” ski race, details of which are to be confirmed at a later date.

The announcement comes only a few months after the TirolS connection which joined Fieberbrunn in Tirol with Saalbach in Salzburgerland claimed to be the new largest ski area in Austria, overtaking the long standing claimant, Skiwelt in Tirol, although the Skiwelt dispute that claim.

Previously, there had been some doubt whether the ambitious plans could be completed in time for next winter with some suggesting winter 2017-18 was more likely, but today the Arlberg has confirmed the new connections should be open in late November this year.

Advanced skiers have already pointed out on social media that it is already possible to ski from the ‘St Anton side’ to the ‘Lech side’, in one direction at least, descending from Valluga,.  However this route is only possible for advanced skiers on a very challenging off piste route who must be accompanied by a guide, and there’s currently no lift back.

With 305km of piste St Anton overtakes the Val d’Isere/Tignes Espace Killy region with 300km and the Grand Massif around France, amongst many others. but remains slightly smaller than the 4 Valleys in Verbier, Paradiski in France and Milky Way across the French/Italian border which each claim around 400km of linked runs, and of course the 3 Valleys with 600km.

According to the accurate independent ski area size site pistelength.com the Sella Ronda in Italy, Park City and Deer Valley combined (two separate but skiable between ski areas) and Big Sky/Yellowstone Club in Montana (physically linked but only skiable in full by Yellowstone club members) all have more than 305km of piste too, although the site disputes that some of those mentioned above claiming more than 400km of piste actually have more than 300km. It has not yet published a stat for the enlarged and linked Arlberg.