The Delancey British National Alpine Championships 2017 reached fever pitch today as the biggest names in British Alpine skiing took to the slopes of Tignes for the Men’s NC Slalom and the Ladies NC GS, with Billy Major claiming the overall British National Champions crown ahead of Cara Brown.

In a hotly contested Uvex Men’s National Championships Slalom, Dave Ryding, who is currently ranked number nine in the World in Slalom, wasn’t taking anything for granted as he went all out to try and claim the title. With Ryding feeling the pressure to secure the win and beat Alain Baxter’s record of seven British Slalom titles, he gave it everything to put down the fastest first run of the British athletes. Just behind Ryding was young gun Laurie Taylor who clocked the second fastest first run time ahead of Charlie Raposo. 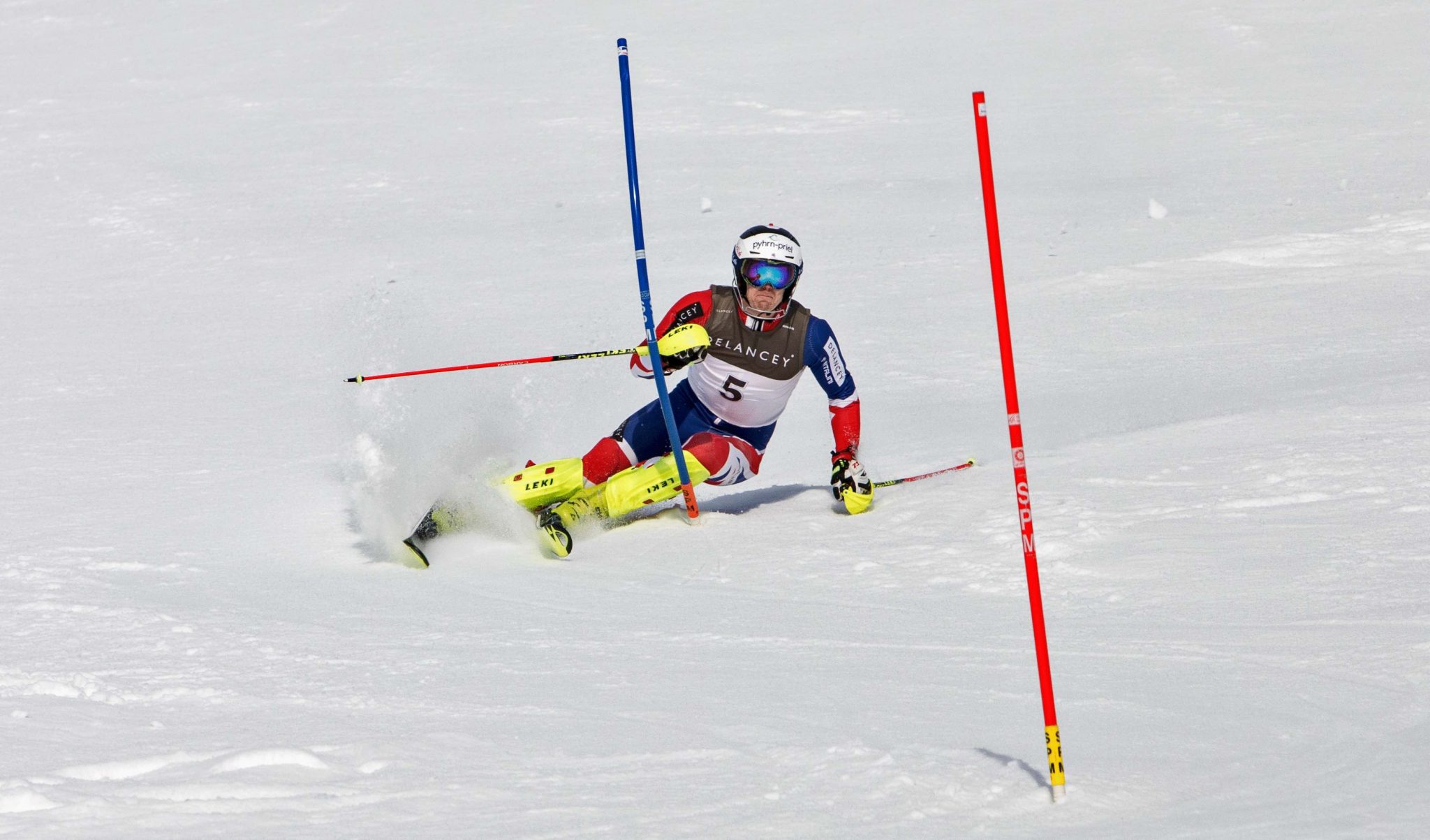 Going into the second run, Ryding put down a solid run and overall time of 1.26.70 to seal the British title and claim the record of eight British Slalom Champion crowns, with Taylor just behind him in 1.27.94. Unfortunately Charlie Raposo straddled a gate in the second run and clocked a DNF, meaning Billy Major (1.30.56) moved up to take the third and final spot on the podium. The fastest Under 18 skier was Harry Deighton (1.42.08) with Sam Todd-Saunders (1.37.52) claiming the prize for the fastest non-British team athlete.

Ryding said after his win: “I’m very happy to win the British Championships, but not so happy with my skiing. For some reason, I just couldn’t get into it like I would normally want to, but a fight is a fight and you have good days and bad days, but it’s nice to get another title. I was probably a bit nervous to be honest, and that’s full respect to the younger guys because they are getting better and better.

“I’ve got more of a challenge on my hands these days, and I know if I ski like that next year, I won’t win. I need to try and enjoy it more rather than worrying about it. I knew that I had seven British titles and no one had ever got eight, so it’s good to get that ticked off and now I can let someone else go for it now. It shows that the British Championships mean a lot to me. I really like winning this one and it tops off a good season.” 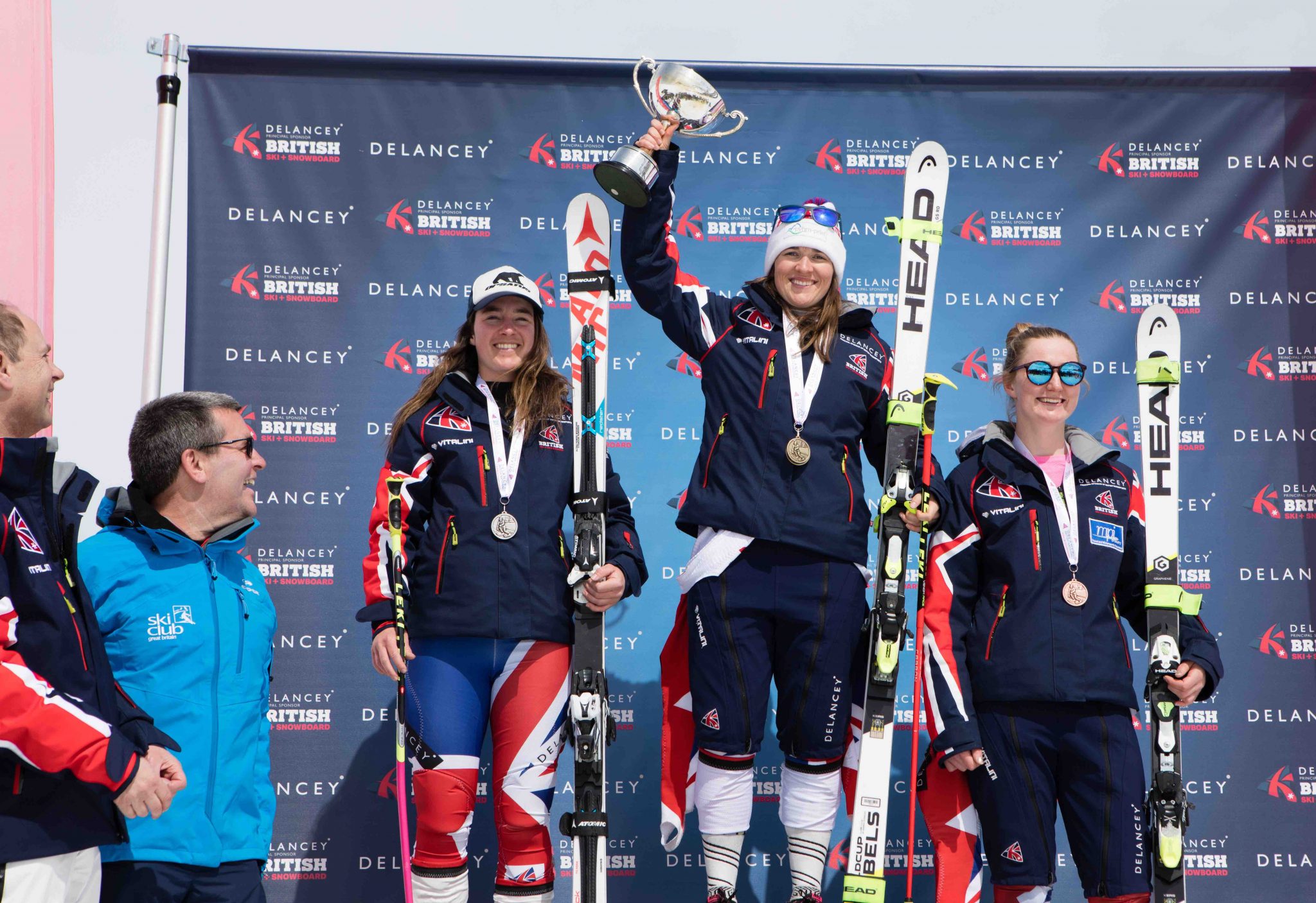 Alex Tilley (1.58.93) put yesterday’s disappointment of not finishing the Slalom to one side to put in two cracking runs in the Uvex Ladies National Championships GS and take the British National Champions title. Behind Tilley was Cara Brown who kept her second place going into the second run to stand on the podium with an overall time of 2.01.32. Third place went to Charlie Guest who was doing her first GS for several months. She finished in an overall time of 2.02.53. The fastest Under 18 skier was Alicja Krahelski (2.06.73) and the fastest non-British team skier was Natalia Harte (2.04.82).

Alex Tilley said after her win: “I’m so relieved, yesterday didn’t go to plan because I got a bit too much on top of myself with expectation. We went away and spoke a lot about how I was feeling in the start gate, and I’m happy that I was able to focus that in more of a positive way. I think I attacked the first run more so than I did the second, conditions were a little harder and more easy to go. In the second run, I had to be a little smarter because slushy snow can sometimes go away from you. I think I coped with it well considering, I’m just happy to get the win. We made big steps forward, in the Slalom World Cup especially, so we absolutely know that the skiing is there, I just have a bit of mental work to do.”

Today saw the overall British National Champions crowned with the culmination of the NC races. Taking the overall crown and the Sir John Ritblat Victor Ludorum Trophy was Billy Major after his consistent results throughout the week, including four podiums and a win in the NJC Downhill. Just behind him was Cara Brown who claimed three podium places throughout the week. Brown was the recipient of the Lilywhite Trophy for the overall Ladies NC Combined title ahead of Honor Clissold and Jessica Anderson. And for the men, Billy Major took the Men’s NC Combined title and the Fedden Trophy ahead of Iain Innes and Zak Vinter. The overall Under 18 prizes went to Abigail Bruce and Leo Karavasili and the non-team British prizes went to Natalia Harte and Sam Todd-Saunders. Sunday will see the overall National Junior Champions crowned.

Tomorrow sees a change in schedule due to an incoming weather front, with the Delancey Ladies’ and Men’s British GS NJC Championships running alongside the British Disabled Men’s and Ladies GS. Starlists can be found here.

Principal sponsor Delancey has now supported the British National Alpine Ski Championships for 7 years and Chairman of Delancey’s Advisory Board and British Ski and Snowboard president, Sir John Ritblat, has sponsored the sport for 40 years – the longest standing personal sponsorship for a sport.