The British Schoolgirls Races, which is organised by the Ladies Ski Club, proved once again to be a resounding success for 2020 as the event welcomed 54 schools and 159 racers plus reserve racers, teachers, parents and coaches to the slopes of Flaine.

With two contrasting days of weather, organisers of the 61st edition of the event worked hard to run a Giant Slalom, Parallel Team Slalom and Slalom across the two days of racing. As has been the case for many years, the event continued to welcome skiers of all levels, ranging from British team racers through to those who were racing on snow for the first time. With several of the girls taking the competition seriously, there were equally as many girls there to learn new skills, build confidence and enjoy being part of a fun and inclusive event. 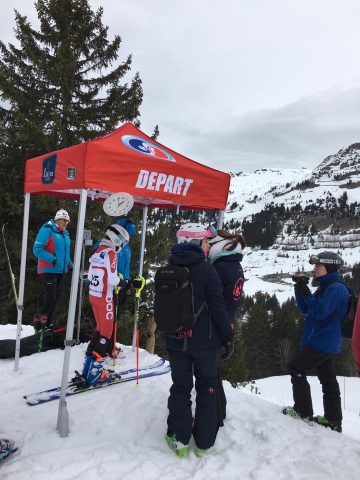 Day one of the racing saw good snow conditions and even some sunshine as the girls tackled a two run Giant Slalom race on the Calcite piste. With four schools attending the British Schoolgirls Races for the first time, there was a quick learning curve for many of the racers, with a few tumbles along the way. Most of the girls completed the course with a smile, however, and couldn’t wait to get back to the top for a second run. Overall winner of the GS was Ella Weeks from Guildford High School, with Giselle Gorringe from NCLS in second places and Isabelle Lander in third position. The Best School was Guildford High A (pictured below) with Strathallan in second and New Hall in third. The Best New Team was Malvern St James. All age group winners for registered and non registered racers can be found on the British Schoolgirls Races website. 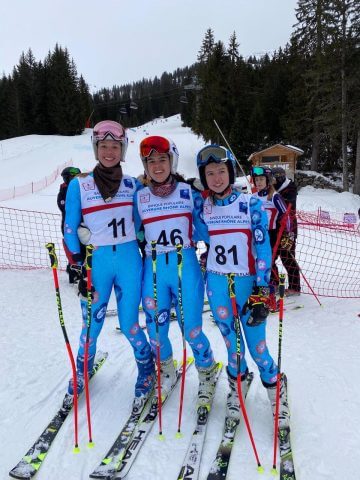 Following the conclusion of the GS there was time to run a Parallel Team Slalom for the ‘A’ teams from each school. This got the competitive juices flowing and there was some close racing as the competition got towards the semi final stage. Semi-final one saw Reed’s victor over New Hall who met Guildford High in the final after a win over Cheltenham. The final was best of three, with very little to choose between the two teams. After a victory in the first race for Guildford, they held their nerve to edge out Reed’s in the second race and take the overall Parallel Slalom victory. 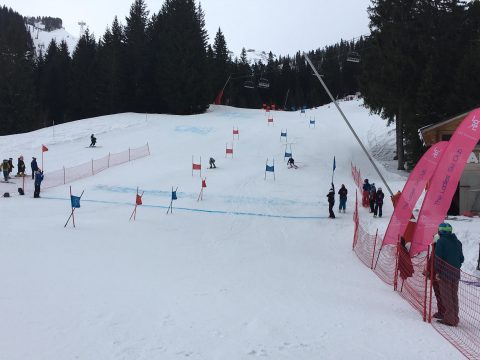 Day two saw very tricky weather conditions with heavy snow and strong winds making things difficult for the racers and organisers alike. After a delayed start the hard working course crew made sure that all the racers were able to do one run of Slalom. But as the course got snowier and more chopped up, a decision was made to stop the race for safety reasons and let the run one results stand for the overall prizes. With some exceptional racing in tricky conditions, the same three girls who had taken to the podium in the GS, did so again in the Slalom, with Ella Weeks taking the title, Giselle Gorringe in second and Isabelle Lander in third. The best school was again Guildford High A, Strathallan in second place and New Hall A in third. All age group winners for registered and non registered racers can be found on the British Schoolgirls Races website.

British Schoolgirls’ Races organiser Anne Taylor said following of the event: “Despite tricky snow conditions on the second day of the event, all the schools and racers seemed to really enjoy the 2020 British Schoolgirls races. It was again great to see girls of all levels, and lots of smiles as they crossed the finish line. We want to say a huge thank-you to Flaine for hosting us again, all the schools, teachers and parents, as well as our volunteers and sponsors. Without them this event wouldn’t be as professional and smooth running as it is.”

New for this year, the British Schoolgirls Race teamed up with Myeloma UK, the event’s official charity. And to date hundreds of pounds have been raised for the only organisation in the UK dealing exclusively with the blood cancer myeloma and related conditions.

Full overall results and age group results can be found on: www.britishschoolgirlsraces.co.uk. 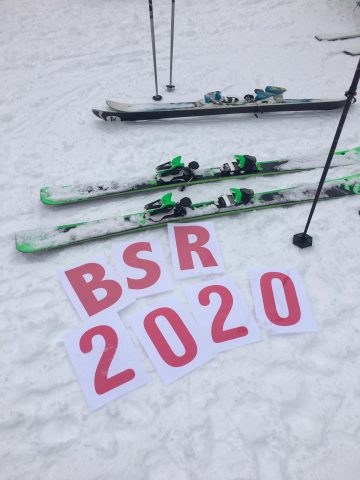