Action starts today at the Delancey British National Alpine Championships, with the NC and NJC Super Gs kicking off proceedings, after the start of racing was delayed 24 hours due to heavy snowfall in Tignes on Saturday night.

The biggest event on the British Alpine Ski Racing calendar will see the best British ski racers, including Dave Ryding and Alex Tilley, battling it out for the Senior and Junior British Championship honours, in what promises to be an exciting week or racing.

Delancey’s charity partner Snow-Camp are in Tignes supporting Championships for the second year running as Delancey’s official charity partner. Snow-Camp aims to help transform the lives of young people and last year two of Snow-Camp’s Apprentices, Jade Salmon and Shayleigh Kitto, were welcomed as part of the Delancey and British Ski and Snowboard volunteer staff. 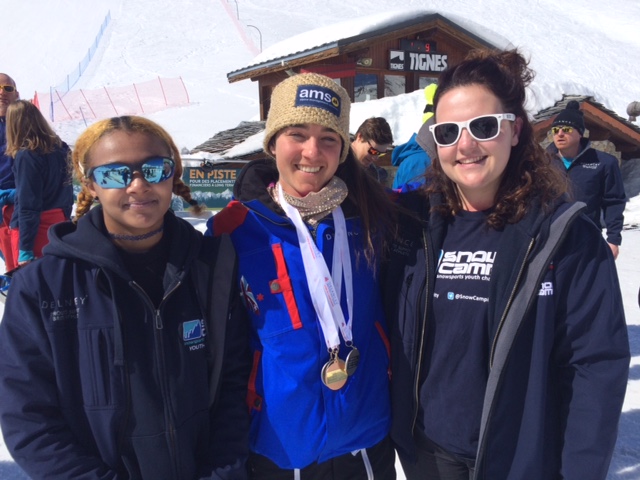 Four of Snow-Camp’s young people will be volunteering across the event this year as part of the on-snow organising team. This year the apprentices will be Hamza Alkebida (17), Aimee Hudgell (17), Lewis Young (20) and Laquan Bacchus (20).

The Snowcamp team will remain in Tignes to help with the increasingly popular Children’s National Championship which will follow from 3rd to 7th April featuring ski racers from age 10 upwards.

For 2017, Snow-Camp apprentices Hamza Alkebida (17), Aimee Hudgell (17) Lewis Young (20) and Laquan Bacchus (20) head to Tignes to play a key role in the running of the biggest event on the British Alpine skiing calendar.

“The area I’m from is boring with a lot of crime, it can be really negative and not a nice place to live really. To be offered something more positive is amazing and I’m so pleased that my youth project suggested that I join Snow-Camp’s programmes. It’s amazing to be given this opportunity to do something I would never have done myself and I can’t believe that I get to volunteer at the British National Alpine Championships! Currently, I’m on a work placement at Ski World, and I hope I’ll always be able to work in the snow-sports industry! Thank you Snow-Camp, Delancey and British Ski and Snowboard!

Snow-Camp is the UK’s only registered charity using a combination of snowsports, life skills sessions, qualifications and vocational opportunities to support inner city young people. The charity’s programmes enable young people to reflect on the key issues impacting their day-to-day lives, and help them develop new skills to support their futures.

Snow-Camp first launched in London in 2003 and has since expanded across the country to support over 7,500 young people and has launched in London, Bristol, Cardiff, Scotland and the Midlands. The charity has a target to be running the full Snow-Camp journey of programmes across five UK cities by 2018 (the 5NOW expansion plan).