2019 in the French Pyrenees

The French Pyrenees are settling into the current ski season with French snowfall for the start of 2019 and lots of new attractions to tempt skiers and boarders to their slopes this year.

For those unfamiliar with the region, the French Pyrenees is a friendly, sunny, snowy region with something of a Mediterranean vibe located down on France’s southern border with Spain and Andorra.

Despite its southerly latitude it has a spectacular snowfall record, often boasting deeper snow depths than the Alps to the north, as essentially it’s the first place the snow clouds dump on as they arrive full of moisture from the sea.

The region has an authentic feel with many of the resorts having year-round communities; prices tend to be lower than further north and there’s even a strong foodie culture to dive into. Spa culture is also a big part of the Pyrenees snow holiday experience, with every resort having its own great spa. The ski region’s ski areas are of a good size for a week or even a long weekend’s skiing and are easy to reach via Toulouse (served by BA/easyJet) or Lourdes (Ryanair). 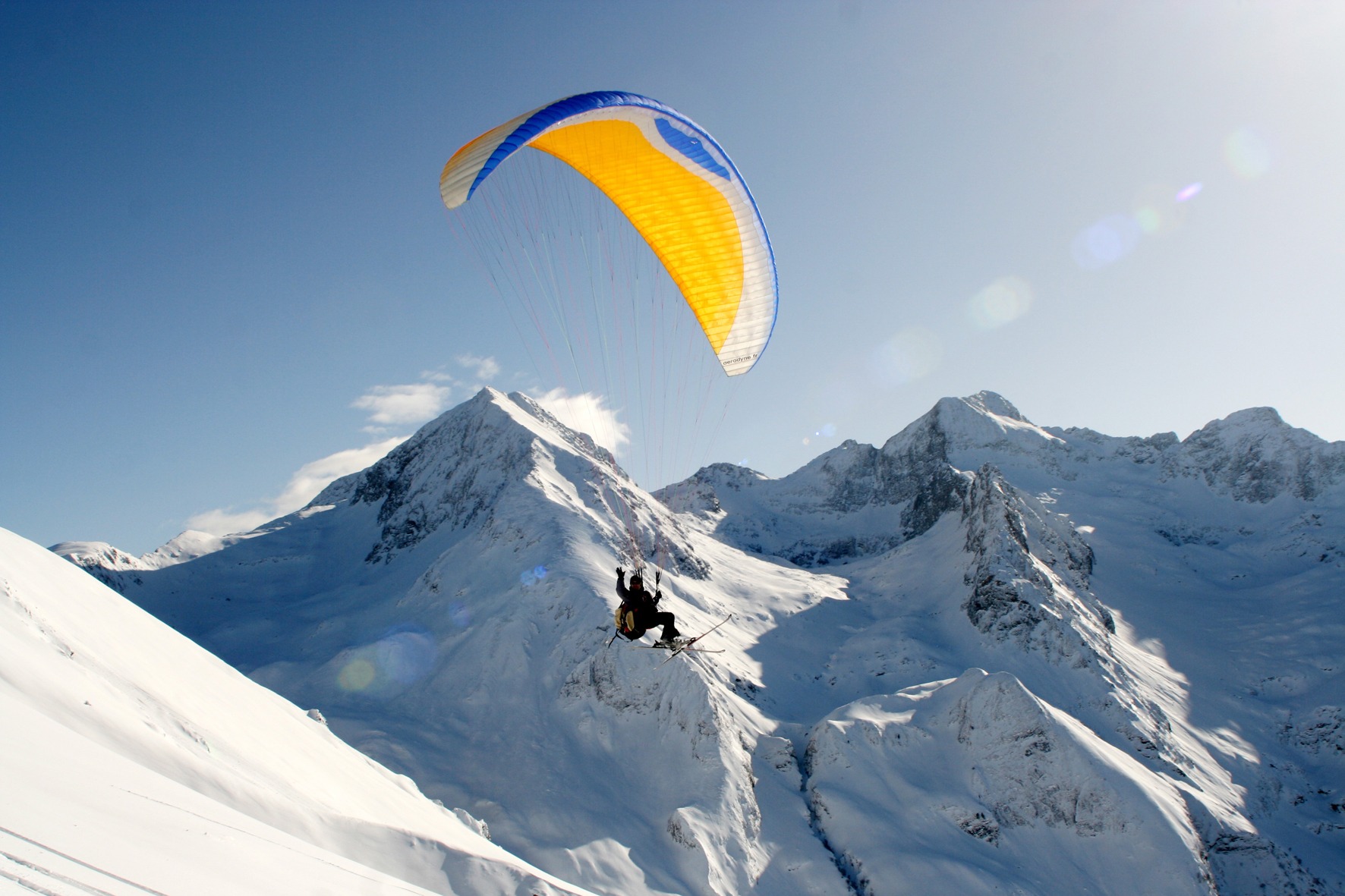 So here’s what’s happening in the French Pyrenees in winter 2019:

The first question, when you’re planning your trip to the French Pyrenees, is which region and then which resort to choose. There are the highest peaks of the Hautes-Pyrenees or the laid-back atmosphere in the Pyrenees-Orientales region. Then you can choose between the ambience of traditional villages or the maximised convenience of purpose-built ski centres, and spa towns or intimate villages. The good news is it’s hard to go wrong and you’ll most likely end up hooked and wanting to try one after another.

Here’s a very quick guide to some to consider, however. In the Hautes-Pyrenees Saint-Lary is one of the bigger resorts and ski areas while Cauterets has a great compact base, spa and foodie culture and one of the best snow records in Europe. The Grand Tourmalet region is the biggest in the French Pyrenees and includes the famed Pic du Midi, one of the world’s great off-piste descents. Purpose-built Peyragudes has the interesting attraction of having been a key location for the opening scenes of the James Bond 007 film Tomorrow Never Dies and recently opened a James Bond ski run to celebrate.

In the Ariège mountains the thermal spa town of Ax-les-Thermes provides the benefit of being accessible by rail from the UK surprisingly quickly (if not by air via Toulouse). It also has a new ski lift and several new runs to offer this winter, and finally in the Pyrenees-Orientales region Les Angles, another purpose-built resort, has its new Angleo spa with a fusion of Catalan and French influences open for this winter. 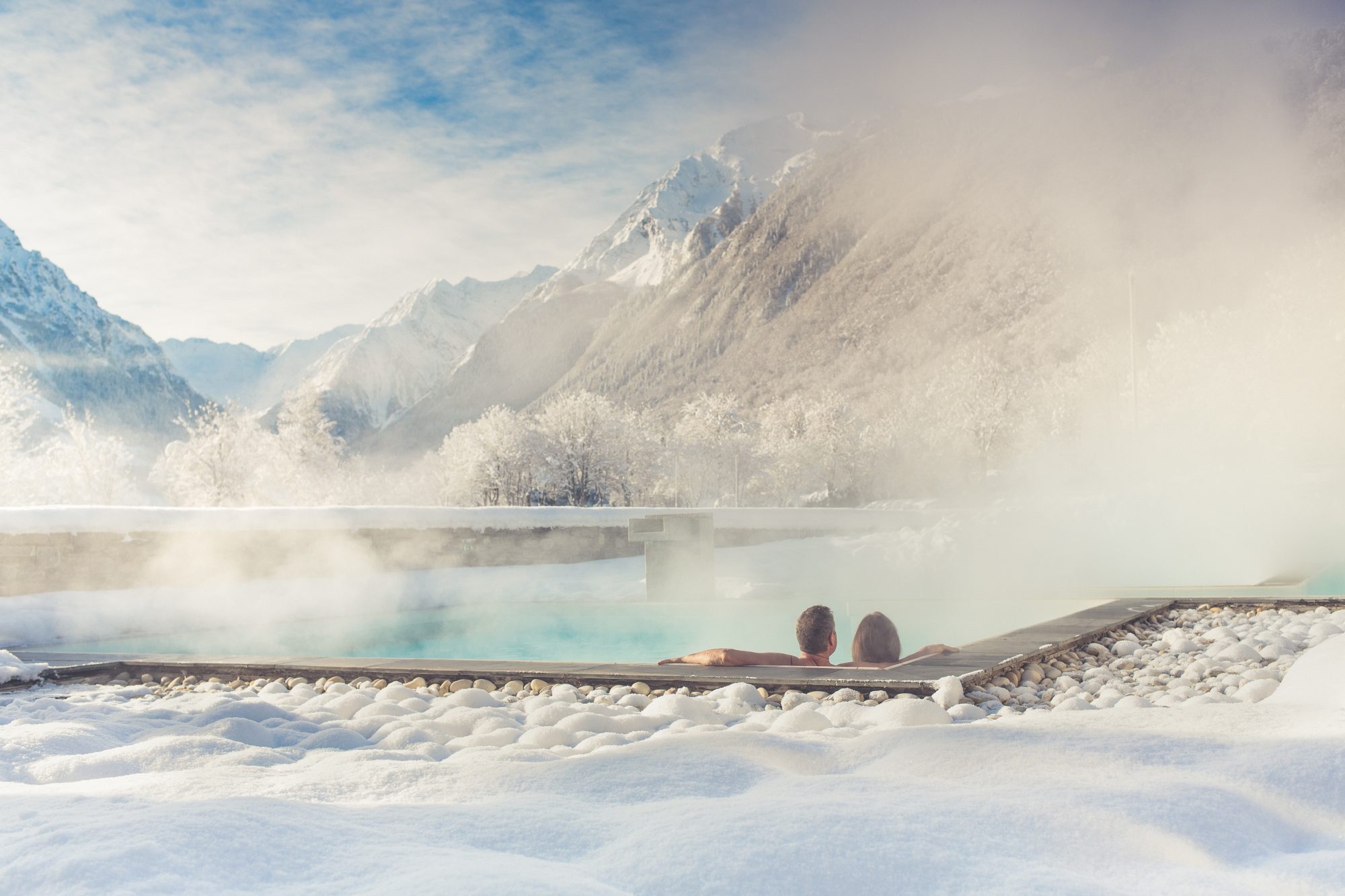 For a half-term family ski holiday with a difference head to Saint-Lary – a great alternative for a family ski holiday with 100km of runs served by more than 30 lifts and backed up by 300 snow guns. Awarded the Famille Plus label by the French government for its exceptional service and facilities for families, on-snow attractions include a special kids’ park, green slopes, two sledging runs, a play area and a large pedestrian area. There are two nurseries taking children from 18 months of age, and ski school can start from age three.

Older kids will enjoy the terrain parks and all the other activities on offer here including speed-riding, dog sledding, snow biking, ice climbing, paragliding, snow scooters, paintball … the list goes on.

Good skiers of all ages aren’t forgotten either with the black “Sarrat” descent arguably one of the most beautiful off-piste routes in the Pyrenees after a fresh snowfall.

The Sensoria wellness centre in the resort’s lovely base village offers something for kids and Mum and Dad alike with four areas including spa facilities for adults and water fun area for the kids. 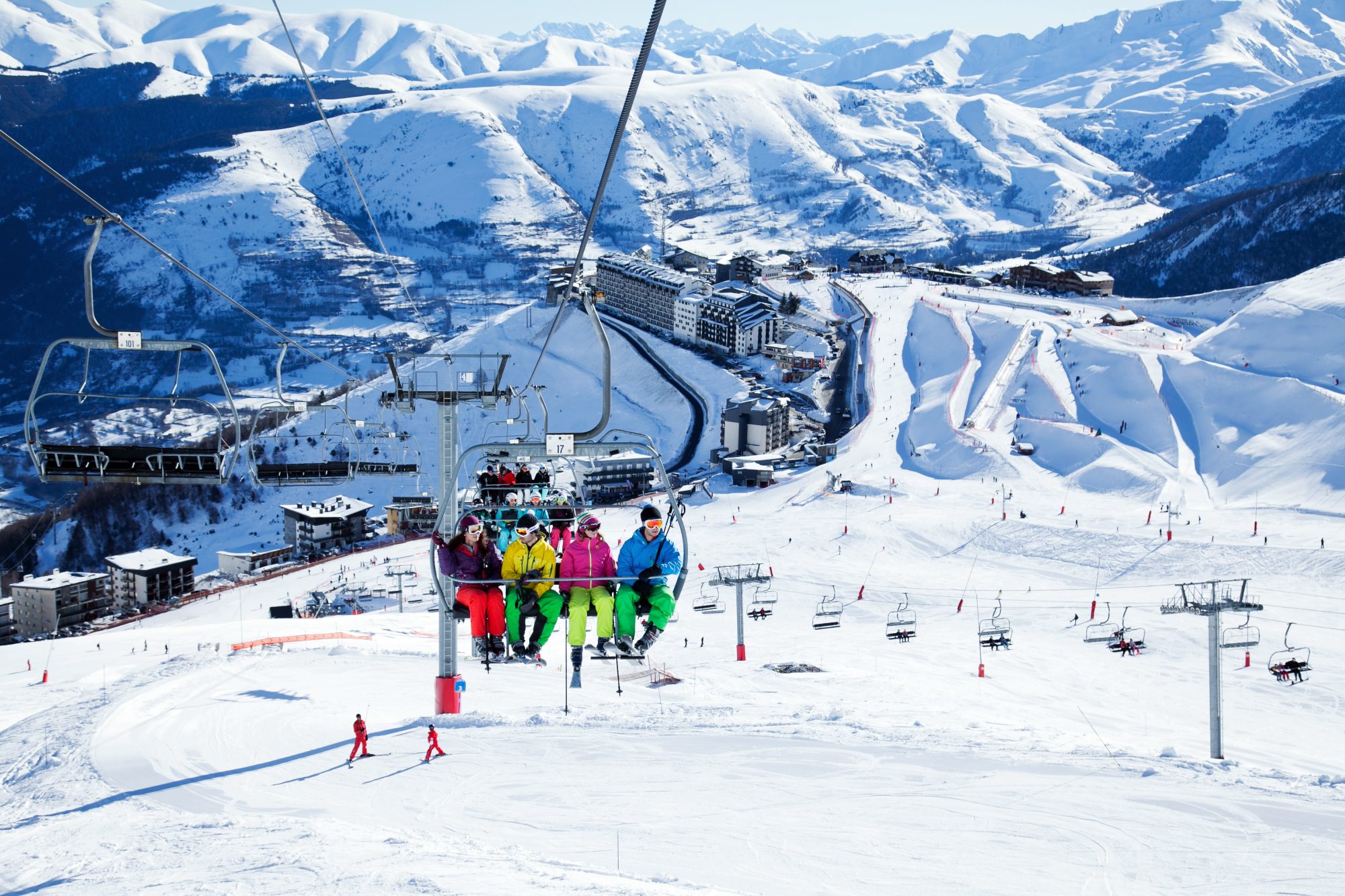 The start of spring is peak time for exploring the Pic du Midi and the biggest ski area in the French Pyrenees, Grand Tourmalet, with its 100km of runs and 1,100m of vertical served by 34 lifts. Stay in Barèges, known for its tree-lined runs or in La Mongie with its wide-open slopes.

The area’s special attraction, however, is undoubtedly the chance to sign up for a high-altitude guided off-piste descent down from Pic du Midi. Opened as a unique freeride ski domain as recently as December 2013, based on the idea of the Aiguille du Midi in Chamonix and La Grave, the spectacular cable car ride to the 2,877m top station from where there is 360° view of the Pyrenees is exciting enough. But for good skiers descents of up to 1,700 vertical metres and 10km in length are the icing on the cake at this incredible ski destination.

Forget Brexit, if it happens, and head to the great resort of Cauterets, open until the end of April each season. It’s often sitting on the deepest snow base in France by the end of March. There are 22 slopes, 15 lifts and plenty of snowmaking.

Cauterets is a village with beautiful original architecture and two ski areas: the Cirque du Lys for alpine skiing, reached quickly from the heart of the village by a modern eight-passenger gondola, and Pont d’Espagne area at the heart of the Pyrenees National Park for Nordic activities, although there’s another 3km of downhill here too.

New this year the “Cauterets Fun Park” is an almost kilometre-long area with on-snow attractions including a family Slalom Zone, JIB area and a Yeti “parcours” adventure area. 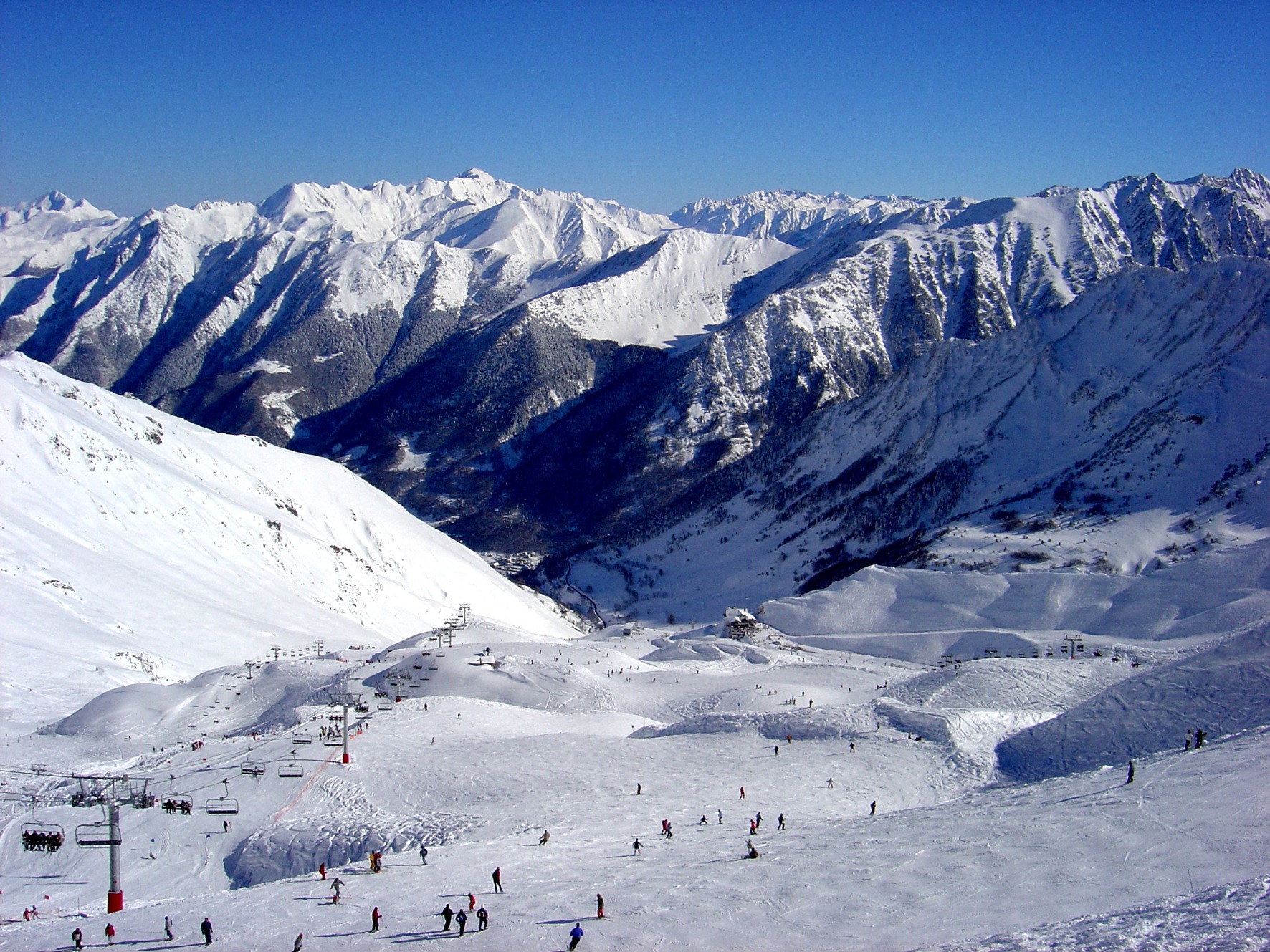 You can also choose to mix spa time with slope time and enjoy a new gourmet body treatment with organic honey from the Pyrenees in the resort’s Bains du Rocher. The 75-minute treatment starts with a scrub made from plum kernel, propolis and honey, followed by a massage with propolis oil and a Cauterets honey body wrap.

For more information, head to lespyrenees.net

Yoga in the Pyrenees

Late Snow in the Alps (and Pyrenees)