17-year-old Kirsty Muir from Aberdeen, Britain’s youngest athlete at the Beijing Olympics, has taken fifth place in the Big Air freestyle skiing competition at the 2022 Games.

“I’m so happy right now honestly, the level was insane. It feels amazing. I couldn’t have hoped to have skied better today and I’m so proud of all the girls,” Muir told BBC Sport.

China’s Eileen Gu took the gold with 188.25 after a massive 94.50 on her final jump, with France’s Tess Ledeux in the silver medal position and Switzerland’s Mathilde Gremaud taking bronze. Muir scored 169.00, including a 90.25 on her first jump.

Kirsty competes with Gu again in the Slopestyle competition with qualifying on Sunday then returns to her studies in Aberdeen.

At the start of the week the organisers of the Fort William Mountain Festival had announced Kirsty, who also competes in Slopestyle and Halfpipe, is also the eighth recipient of The Scottish Youth Award for Excellence in Mountain Culture, sponsored by West Highland College UHI.

The festival’s youth ambassador award celebrates adventurous young people, the landscapes they choose to explore and the outdoor pursuits in which they excel.  The young winner needs to have shown resilience and determination to succeed within their chosen area of expertise, shown results through their own efforts and ideas, given back to their community, whilst being thought of as an example of excellence by others.

Described as a “one in a generation athlete” by former Olympic snowboarder Lesley McKenna; and being touted as a strong GB medal contender at the Winter Olympic Winter Games Beijing, Kirsty Muir epitomises these winning principles perfectly.

“Her extraordinary rise to the top of the international freestyle skiing circuit, from hitting the dry slopes of Aberdeen Snowsports Centre at ‘nearly four’ years old, to starting to hone her freestyle craft at seven, to multiple youth competition podiums and a memorable maiden slopestyle World Cup medal in Aspen, Colorado at 16, can all be attributed to her grit, passion, training, focus, dogged determination for success, and humility,” a statement from the Award judges concludes.

Having achieved a slew of under-age titles at British Indoor Championships Ski & Snowboard and The BRITS Championships, Kirsty made the senior ranks stand up and take notice at the 2018 BRITS.  The 13-year-old won all three Freeski titles – Big Air, Slopestyle and Halfpipe – against competitors many years her senior.  She went on to be awarded the ‘Spirit of Sarah’ Scholarship by Momentum Camps and the Sarah Burke Foundation, becoming the first athlete outside of North America to win the award which included attendance at their summer freestyle camp in Whistler.

In 2019 she made the podium on the international circuit taking first place in her first Europa Cup Slopestyle competition, continuing a successful season with a second and a third place at the Junior World Championships in Sweden.

Then came the ‘biggest breakthrough’ in Muir’s career when she won a silver medal in the Freeski Big Air competition at the 2020 Winter Youth Olympic Games in Lausanne, Switzerland.  Having also finished fourth in the slopestyle competition, Kirsty was chosen as Team GB’s flagbearer for the Closing Ceremony.

In March 2021, in her first trip to America, Muir claimed her first World Cup medal with a silver in the ski slopestyle competition in Aspen. At 16 she was the youngest competitor in the final in what was only her fourth World Cup start.  She followed this up with a hugely impressive sixth place in the FIS Freestyle Ski and Snowboarding World Championships, also staged in Aspen.  Kirsty was the only British female to qualify for the eight-woman slopestyle final.    She finished off the 20/21 season in second place in the World Cup Freeski Slopestyle standings, also being nominated for the European Olympic Committee’s 2021 Winter Piotr Nurowski “Best European Young Winter Athlete” prize!!

Although the 2021/22 World Cup season is in the early stages, Muir has carried over her good form by finishing fourth in the first Slopestyle event in Stubai, Austria, in November, and fifth at Mammoth Mountain in January. 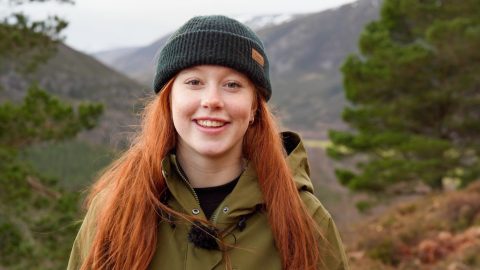