Sarah Lewis, who was ousted as Secretary General of the International Ski Federation (FIS) last October, has announced her candidacy to become the organisation’s new president.

A vote on who will become the first new FIS president this century, and in over two decades, is due to take place later this spring.

Lewis is a British former alpine skier who competed in the 1988 Winter Olympics and was awarded the Femme en Or prize in 2006 and an OBE in 2018 for her work.

She had been Secretary General of the FIS for 20 years when she was unexpectedly removed from her role, without explanation, last autumn.

“We are entering a new era for FIS and global sport – an era that requires FIS to tackle its role in a changed, more inclusive and demanding society, and an era that FIS must embrace for growth, a healthy future for our sport, with our athletes at the centre,” Lewis said adding, “We have been presented with a unique opportunity – to elect a 21st century President, whose full focus is to work hand-in-hand with the National Associations and stakeholders, leading FIS on a strategic transformation to become a global movement for world skiing and snowboarding.”

The current president of the FIS, 77-year-old Gian-Franco Kasper, has held the position since 1998, having himself been the organisation’s Secretary General for the 23 years before that.

In February 2019 Kasper stated in an interview that he preferred working with dictatorships in organising large events as they were more able to get things done than democracies, and cast doubt on climate change, leading to global advocacy group Protect Our Winters to demand his immediate resignation.  Kasper later apologised and said his comments were intended to be humorous. 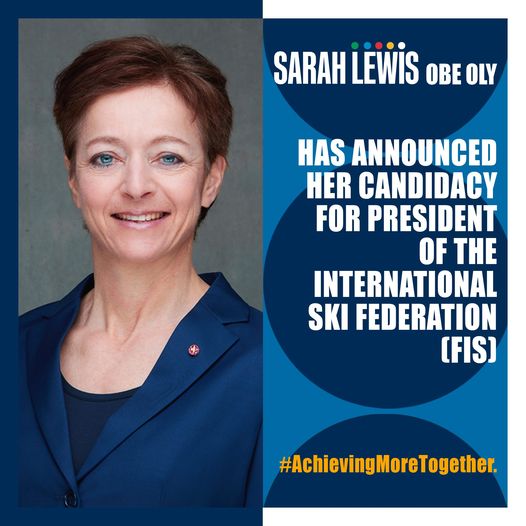 There are currently three other candidates for the position of President, two of them Swedish.

Swedish billionaire Johan Eliasch, the chairman and chief executive of sportswear company Head, has been nominated for the FIS Presidency by GB Snowsport.

The Swedish Ski Association has nominated Mats Årjes, the current Vice President and Treasurer of the FIS and Acting Chairman of FIS Marketing AG as well as the former Chief Executive of SkiStar, which runs several leading Scandinavian ski areas.

Kasper was due to retire last year but a vote on his replacement has been delayed by a year, with the vote currently due to take place at an online FIS annual congress on June 4th.