Britain and much of the rest of the world is in lockdown and instead of the hoped-for easing of restrictions in the New Year, things sadly seems to be getting worse for those wondering “when can we go skiing?”.

For those who do want to know exactly what the situation is with the 20-21 ski season at the moment, here’s the latest bad and good news, all in one place: 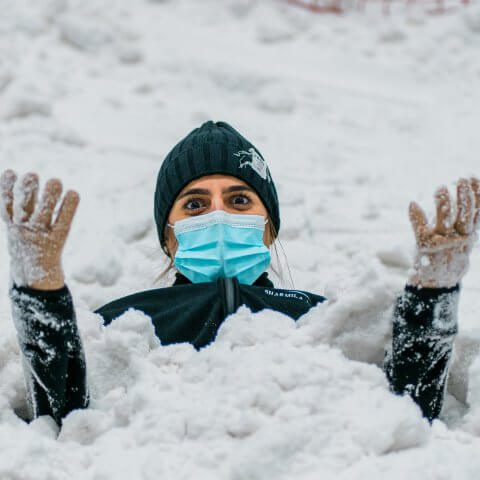 Disclaimer: By writing about what’s happening in ski resorts at present we are not implying anyone can go to them at present, or should try to go to them at present. We also apologise to those who have read this news against their will or better judgement and are upset to read anything about skiing at the moment whilst we can’t go skiing. Travel from the UK for non-essential reasons is currently banned, as is travel in to most ski nations whether lifts are open or not or requires quarantine on arrival in most cases. Even if this were not the case travel options are limited and few insurance policies cover travel in the pandemic.

With travel agents reporting 90% of enquiries from skiers are now for already-on-sale winter 21-22 ski holidays (and warning, as they would, that pent-up demand could outstrip supply), instead many skiers are now nervously asking whether we will actually get to ski at all this season.

The answer is, unfortunately, right now nobody knows. We keep putting the date we hope it might be possible back by a month, but we’re now rapidly reaching Easter and the end of the season with that strategy.

Of course, there’s always summer and autumn skiing which was open to us last year after the first lockdown.

Back to this winter though, and being a glass-half-full kind of publication, despite everything, we can see some positive signs among the gloom. In the past few weeks, ski areas in Andorra and Austria have been allowed to open for the season, and ski areas in Spain, Switzerland and Scandinavia are also open – as are almost all in Japan and North America.

The first problem for Brits though is that they’re currently open to local skiers only in most cases.

The second, looking ahead to when they re-open to ‘winter tourism’ from the wider world, is that even if those restrictions are lifted, most currently have additional bans on non-essential traveller from the UK as we are at the epicentre of the ‘new variant’ of COVID 19.  It is currently unknown when that isolation will end, and our new ‘third country’ status in Europe following the end of the Brexit transition is probably not going to help.

The most pessimistic (or perhaps realistic) are also noting that quarantines are likely to remain in place whenever borders do reopen making that week in the mountains more difficult to achieve.

Taking all this into account, the most optimistic think we might be able to travel to ski by March at the earliest.  The still optimistic say “March maybe?” and perhaps the more realistic are looking at April/Easter as the best hope. And even then it currently remains 100% hope and 0% guaranteed.

So which ski resorts are open or opening remains a little academic, but for the record here’s the position across the skiing world right now (it’s important to be aware these can change at any time).

Andorra – ski slopes opened for the season on 2nd January, currently only open to people in Andorra.

Austria – The Austrian government have announced the hard lockdown there will be extended until at least 8 February 2021. At that point they hope there will be small loosening of restrictions, but hotels and restaurants are expected to remain closed until at least the end of February. Ski areas will remain open to local people, with requirements that medical-grade masks are worn, not the usual face coverings.

Canada – Most of Canada’s ski areas have opened although Ontario has closed their resorts. Elsewhere there are strict internal travel restrictions and borders are also currently closed to most travellers.

Finland – Some of Finland’s ski areas have been open for more than three months already and the country did look like it might be one of the better bets for this winter back in early December as both it and the UK eased self-isolation requirements. That was before things moved in the wrong direction when the new variant of COVID 19 was identified in England.

France – Ski resorts are open but the ski lifts are not. A February re-opening has recently been ruled out, with the government suggesting it will now be March at the earliest if slopes are able to open. Beginners can still use nursery slope lifts, ski touring is possible, one resort even used ponies to pull ski school classes up the slopes.

Italy – Italian government have announced the hard lockdown there will extend to at least February 15th.  When ski areas do open (though there is no further information on when this might be), you can expect lots of restrictions to be in place including limited numbers allowed on the slopes, some reports say 40% normal capacity.

Japan – Japan declared a ‘state of emergency’ in January as virus cases increased, but they’re still at a fraction of European levels at present and ski areas are open and have reported big snowfalls over the past month. Travelling to Japan is currently not possible though.

Norway – Most of Norway’s ski areas are open but the country currently has strict quarantine measures which are stricter for arrivals from the UK than pretty much anywhere else.

Scotland – Scotland was pushed as a possible destination for English skiers this winter but internal UK travel restrictions have so far made that very difficult …then illegal, and the Scottish Government have now closed Scottish centres anyway. It’s not yet known when they’ll be allowed to reopen.

Sweden – Most Swedish ski areas are open but once again there are currently travel restrictions.

Switzerland – Switzerland has taken a different path to most of the rest of Europe, particularly the main Alpine nations, in keeping its ski areas open all winter (with a few exceptions) – albeit with strict measures to prevent virus spread. Currently, Brits can’t travel to Switzerland to ski but this was one of the better options to access in December before the new variant COVID was identified in Britain and may again be one of the first we can travel to whenever things improve.

USA – Most US ski areas are now open but tourism travel to the US is currently closed.