We find out if skiing has changed in Saas Fee, Switzerland.

I was in Switzerland the day their lockdown started. Travelling by train from Arosa to Andermatt, I discovered there would be no lifts open the next day, as the country took severe measures to control the spread of Coronavirus.

Like many skiers, my season was cut short, and I wondered if skiing would ever happen again.

As we progressed through lockdown, gradually there were encouraging signs: in New Zealand, ski resorts opened as normal, albeit with no international visitors; Australian resorts were more cautious, with social distancing in place and limited lift ticket sales; and in June glaciers in Europe opened.

Switzerland has been extremely successful in dealing with the pandemic. It currently has a low infection rate, excellent tracing and almost no deaths.

However, what would skiing there be like in the ‘new normal’? My season ended in Switzerland, so it seemed like the appropriate place to start again.

As founder of Ski Flight Free, I normally travel by train, but in the current situation being packed tightly in a plane is even less appealing.

My journey to resort took 11 hours from London, longer than if I’d flown, but for most of my journey I had seats, if not carriages, to myself.

I can confirm that mask-wearing for longer periods of time takes getting used to, but it does get easier.

Travelling on Eurostar in the 'New Normal'

Iain from Ski Flight Free reports on his journey from London to Paris on Eurostar yesterday.He was on his was to Saas-Fee, Switzerland.

And when you do eventually take your mask off, you appreciate the freedom all the more. Imagine arriving in the Swiss alps, with clean, pure mountain air pouring into your lungs at the end of your journey. It’s sheer bliss.

Saas Fee is a traditional Swiss village that attracts skiers from around the world in summer, thanks to to the Allalin glacier, which offers skiing up to 3500m.

In resort there is no obligation to wear a mask. There is social distancing in cafes and restaurants, but spacious outside terraces make that easy. Some restaurants have Perspex screens between tables to allow their normal table layout to continue.

Every shop has hand sanitizer at the entrance which shoppers are asked to use on their way in and out. Some shops and bars had signs stating the maximum number of people allowed inside at any time, calculated on the square metres of their footprint.

Buffet breakfasts still on the menu

The Hotel Tenne had dispensers at every entrance to the hotel and restaurant. I was surprised to see that they still offered a buffet breakfast – I had assumed this would be a relic of the ‘old normal’ – but guests were simply asked to sanitize first, then put on plastic gloves provided before serving themselves with cereal or ‘gipfeli’. 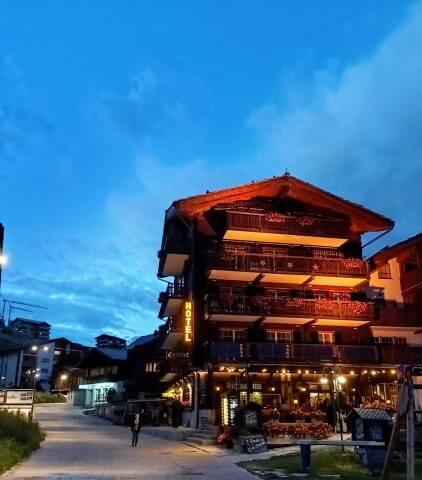 It is really only when you take the Alpin Express gondola that you are reminded life has changed. As on public transport, face masks are compulsory on lifts.

As a relatively late starter in the day, I only once shared a cabin on the way up. The racers, who like to get on the snow while it’s still icy and rock hard, have timed ascents booked in from 6.30am. 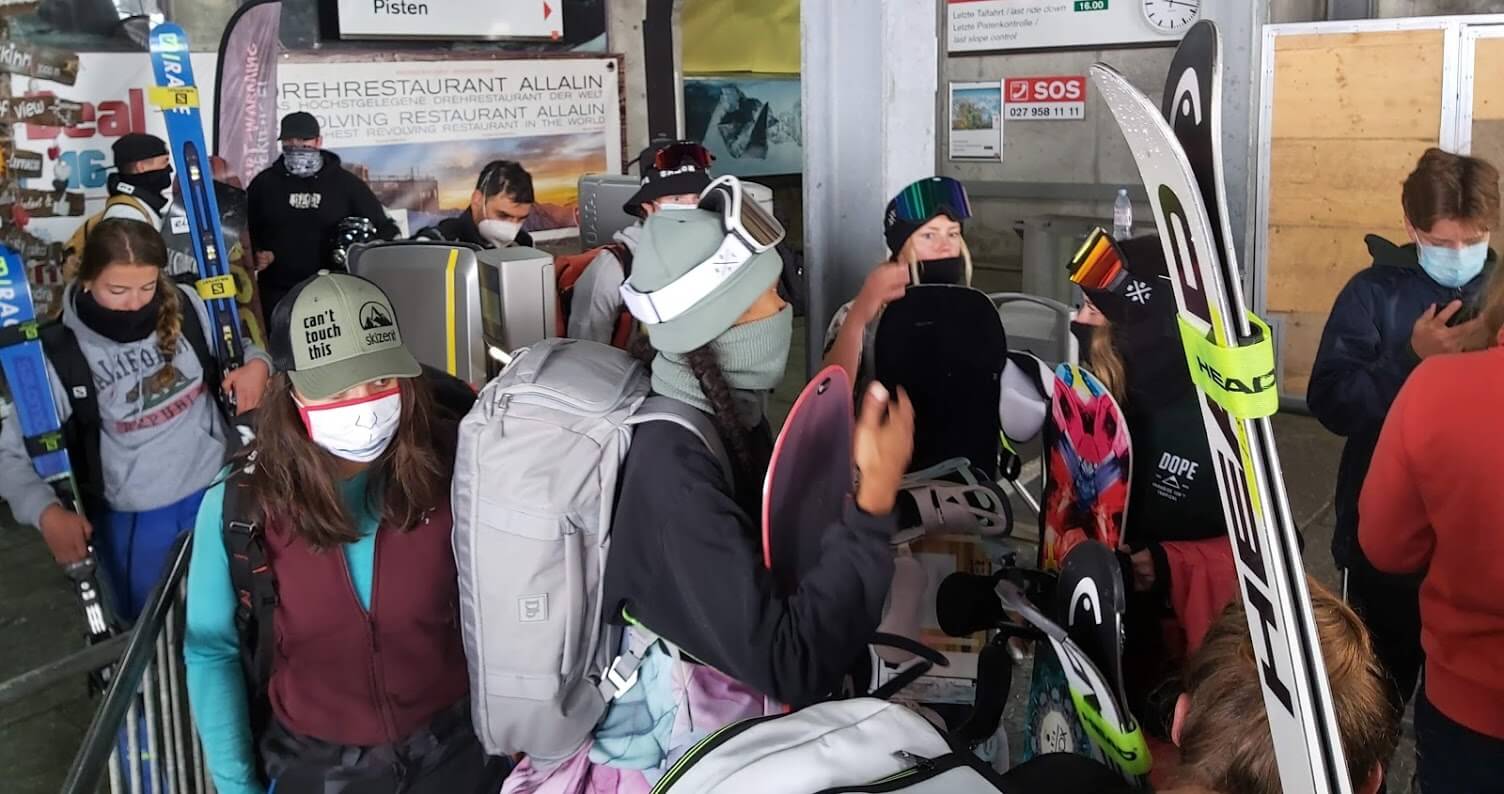 No queues and empty pistes

The gondola is followed by the world’s highest funicular, the Metro Alpin, which takes you from Felskinn at 2980m to the glacier at 3456m. As the whole journey is underground, it’s also considered the highest subway in the world.

You arrive to the magnificent Allalin glacier, a bowl of 20 kilometres of well-groomed pistes. There were two T-bars open while I was in Saas Fee, which keep turning until midday.

If the conditions weren’t perfect for racers anymore by the time I reached the slopes, for the recreational skier it was right in the sweet spot.

There was a good base, with a soft layer of snow on top, practically empty slopes and zero queues. In less than two hours on the mountain, I managed a dozen runs and over 3000m vertical.

360 degree view from the top of glacier

Taking a T-bar can be tricky at the best of times, but some of the racers and coaches were managing it with ease with bundles of slalom poles or extra sets of skis over their shoulders as they headed back to resort.

One of these multi-tasking skiers turned out to be Britain’s top Alpine skier, Dave Ryding, who is in Saas Fee for the summer:

“We always come to Saas Fee. It’s high and you’re guaranteed good training. Because of the [Covid] situation, we’re rented an apartment and we’re going to stay here for the summer.”

Reto Sporrer of Saas-Fee Guides told me that the glacier will get busier as the summer progresses: “July is quiet, but more race teams will come.”

Snow groomers were out preparing more pistes to open in the coming weeks. The snow park, which often attracts top freestylers, such as British skier James ‘Woodsy’ Woods, is still under construction but is slated to open in August.

Skiing in the new normal

The Saas Fee glacier is open through to the autumn, so if, like me, your ski season was cut short, this is your chance to get some turns in again.

I felt completely safe during my time in Switzerland and while you might need a mask on some lifts, skiing in the ‘new normal’ really doesn’t seem so different from the ‘old normal’.

Who knows, you might even end up sharing a T-bar with Dave Ryding!

Iain travelled to Switzerland as a guest of Switzerland Tourism and the Valais. He stayed at the Hotel Tenne, renting skis from Cesar Sport Alpin. Lift passes are available in Saas Fee from CHF75 per day.

Iain travelled by train to Basel via Eurostar and SNCF. In Switzerland, all trains and buses were included with a Swiss Travel Pass (from £193 for 3 days).

96% of Skiers Want to Return to the Slopes This Winter, Survey Finds