Ski All Day, Laugh All Night

The Altitude Comedy Festival is back in Mayrhofen (March 28th – April 1st 2022) after the 2020 and 2021 events being postponed due to COVID19. We caught up with Brett Vincent (pictured above) who has been juggling running his comedy events, management business and the Worlds No.1 Comedy Festival.

So, skiing during the day, comedy at night – is this what a normal day looks like at Altitude Comedy Festival?! It sounds too good to be true…

It’s definitely true! In the daytime all the acts, audience and staff head up the mountain for a day on the slopes. Whatever level they are at there is always someone to go with and we all end up around the same bars and restaurants at lunchtime anyway. Then there’s a race down the hill to be ready for the first show at 5.30pm, the Apres Ski show at The Strass Hotel (right next to the Penken Lift). Normally an hour long, it’s either Improv, or Roast Battle or something topical (this year, expect us to tear into the joke that is Brexit!). The big show of the evening, the Gala show, features all the best comedians lined up ready to make you howl, then we finish the day with our Late Show at 11.30pm back at the Strass, where you’ll see the stars of the future and surprise guests with a real ‘comedy club’ vibe.

How did this idea of comedy and skiing in one event develop?

I have to blame Andrew Maxwell and Marcus Brigstocke for this crazy idea… They were out in Meribel doing some shows and wondered how they could make their trip and annual outing and how to get paid whilst doing something they loved – Altitude was born out of the love for skiing and comedy and we’re now in our 12th year. 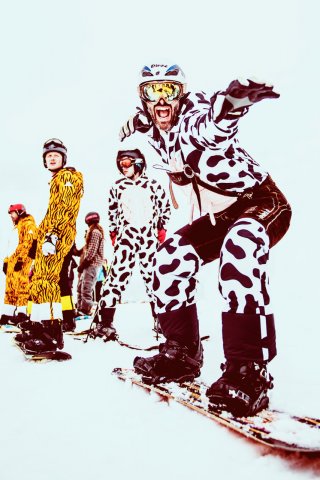 How did you land on Mayrhofen as the perfect host resort for Altitude?

After a rocky year with the French tourist board in 2012, I saw an opportunity in Austria and helped move the festival from France to Austria (Meribel to Mayrhofen). Given I was already booking the comedy for Snowbombing, I had been able to see at first hand the great festival culture and great venues that Mayrhofen had to offer. A year later, and every year since 2013, we’ve put on a full program with comedy stars from all over the world descending on Mayrhofen for a full week.

Mayrhofen is by far one of the best ski resorts in Europe and the people there and out hosts are incredibly welcoming. The choice of venues, especially the Strass Hotel, the perfect place to host both our Apres Ski and Late Shows, but including the super modern Europahaus for the Gala and German language shows confirms what a great place it is for our festival.

Do the comedians actually hit the slopes or do they just jet in for the show?

Our comedians hang around town all week! You could end up having breakfast, lunch or dinner with them, sharing a ski lift, or racing them on the mountain in the Clown Hill Race. VIP wristband holders do get a little more dedicated time with them at a special ‘Meet & Greet’ we put on for them, but you’ll have to get a VIP wristband before i can tell you anymore about that! 😉

Now we know British fans love the festival, but do you get many Austrian guests too?

We have guests coming from all over Europe! This year alone we have people from Paris, Nuremberg, Hannover, Stuttgart, Hamburg, Vienna, Innsbruck, Ljubljana, Rome, Madrid, Belfast, Dublin, Glasgow, Edinburgh and all over England and Wales. We also have 2 German language acts especially for our locals; the amazing Michael Mittermeier and Kaya Yana.

Everyone at Altitude is there for fun. We have people who come for the skiing, for whom the comedy is just some great evening entertainment and we have people that just come for the comedy and have never been up a mountain! Either way, we’re all one big happy family in the end, joining in in each others festivities to make it such a special festival.

Do you think that the Austrians have a different sense of humour?

At first people did think that Austrians and Germans preferred a more slapstick style of comedy but over the years watching the likes of Michael Mittermeier, Kaya Yana, Monika Gruber, Mario Barth and Alfred Dorfer who are all AMAZING, I can confirm we’re all alike and the storytelling style of comedy is global. It just really depends what you prefer as all comedy is subjective.

Is it hard to find German or Austrian acts who will perform in English?

There aren’t many, so when we were able to book Michael Mittermeier a few year ago it was amazing! He was an instant hit with our UK audiences and his English set was a perfect introduction to them on just how funny Germans can be. This year, check out Christian Shulte-Loh who will be performing in both German and English shows. 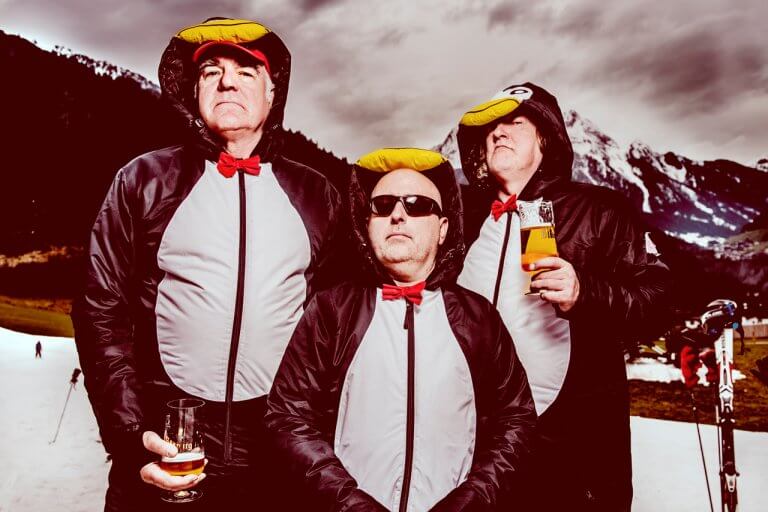 Does Brexit make things more complicated for you in the future – could this even be the last festival in Mayrhofen?

I hope not. The idea of having to complete visa applications for all the artists is terrifying: the amount of admin this festival takes already and to add that on top will be a killer! I guess the last few years have been difficult because there’s been uncertainly while the UK sorted itself out of the mess it got itself into, which meant our audiences were reluctant to invest in something – ie a ticket! – that they might not be able to afford if the economy crashes. That said, I cant see Europe ever being closed to your everyday UK ski-cross-comedy fan, and we working closely with the local Mayrhofen Tourist Board are certainly up for keeping the laughs going up and down the slopes.

Do you think that COVID19 will put people off attending the festival?

Again I hope not. The festival is next March and by that point most of Europe should have had the vaccine and fingers crossed we won’t need to ever speak of that again… We’ve already had to cancel two festivals because of it and we believe like our comedians, staff and a lot of our audiences that we’re going to have the best year ever! And we’re all dying to get back up those mountains and have a right laugh doing it!

Who is the one act you think will surprise the guests most this year?

Over the years we have had some stand-out acts Benny Boot, Ryan Cullen, Emmanuel Sonubi, Andy Askins, Rainer Hersch and of course Terry Alderton. But we can never tell before the festival. A lot of the acts we bring might be unknown before they get to Mayrhofen, but just get it right at the festival and blow everyone away! Our audience are very comedy savvy so the slightly unique acts are always the ones to watch out for… 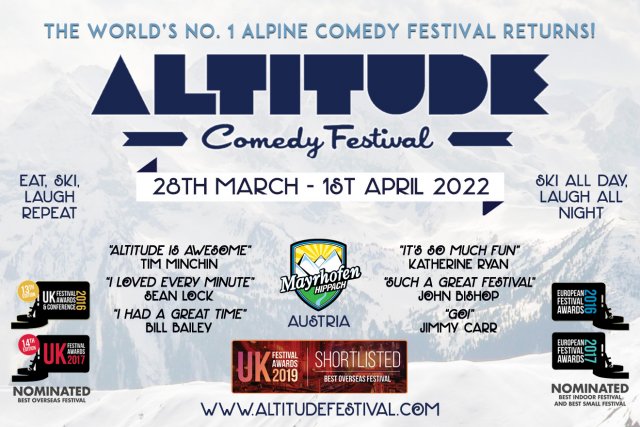 What is your personal highlight at the Festival?

The end of every show when I can see what great fun our audiences have had. We pride ourselves on bringing over the best of UK and International talent and to see the joy and adulation towards these acts night after night is what I do this for! That and trying to break my 74kmph record on my snowboard (I’ve had 3 lessons so far).

What is Altitude Comedy Festival to you – in one sentence?

It’s not only the world’s best alpine comedy festival its also the best week of my life every single year!