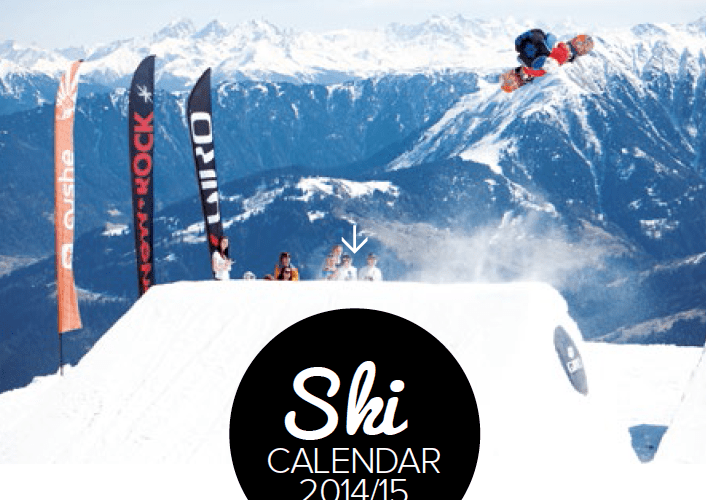 Sochi where? Yes the much-talked about tropical Winter Olympics is now behind us, and talk has moved on to Pyeongchang 2018 already (that’s the next Winter Olympics in South Korea as if you didn’t know).

So with events for 2014–15 already lining up, here’s a quick lowdown on some of the key dates for the coming season:

The World Cup racing season in the northern hemisphere kicks off sooner than you might think, on the weekend of 25–26 October on Sölden’s Rettenbach Glacier, with a women’s giant slalom held on Saturday, while the men’s competition takes place on Sunday. skiweltcup.soelden.com

Music festivals in the mountains continue to get ever more popular, and you don’t have to wait for all the big British-organised festivals in the Alps to roll around in the spring if you want to get dancing sooner. The wonderfully-named new Wow Glacier Love fest, 7–9 November, mixes snow sports on the Kitzsteinhorn glacier, with partying in nearby Kaprun and Zell am See. wowglacierlove.at

Most resorts open in December, and many throw opening events to get the party rolling, and indeed get people in resort before Christmas week. One on the biggest is Rave On Snow at Saalbach Hinterglemm. raveonsnow.comJanuary 2015

After our Sochi success in freestyle events, we can afford to be getting excited about the FIS Freestyle Ski and Snowboard World Championships, 16–25 January, which will take place in Kreischberg, Austria (kreischberg2015.at). It’s unusual, and rather cool we think, to hold ski and board competitions in one event. Let’s hope for more medals!

This month also sees the return of World Snow Day, 18 January, for its fourth staging, aiming to beat the half million young people that took to the slopes free, or at big discounts, in a global participation drive last year.

Although, as mentioned, we’re now all freestyle fanatics after Sochi, the biggest event in traditional downhill speed events, besides the Olympics, comes around every 2 years in the shape of the Alpine World Ski Championships, 2–15 February. It’ll be hosted by regulars Vail and Beaver Creek, although with almost no funding it’s not yet clear if there’ll be any British entries. vailbeavercreek2015.com

March is when the majority of music festivals are staged. Rock The Pistes, 15–21 March, will be back in the Portes du Soleil, with gigs at resorts around the huge Franco-Swiss ski region (rockthepistes.com). The Brits, the longest running festival, staged since 1989, is also likely to be back at the end of March (the-brits.com), probably in Tignes, France, as will Snowboxx (snowboxx.com) in Arinsal, Andorra.

Snowbombing will be back in Mayrhofen, Austria, for its 15th edition. Always one of the best bets for the biggest acts and parties, Snowbombing literally takes over this Tyrolean village in early-April each year. snowbombing.com

Ischgl’s season-ending Top of the Mountain concert always secures the biggest star to hit the slopes each season, taking place at the start of May. Last winter it was Robbie Williams, who will it be for 2015? ischgl.com

Driving To The Alps