Where is Still Open to Ski?

With many ski areas closing for the season (or at least for several weeks and in reality probably the rest of the season) in the last week, the ski resorts that are still open are increasingly struggling to make people believe they are going to stay open. In any case, unless you live local, it’s hard to reach the remainder that are open even if you wanted to.

As the reaction to the coronavirus spread varies from country to country, and as the reaction by governments and ski area operators varies too, it’s a fast changing situation and in most cases the resorts themselves that are still open (or have closed but still hope to re-open) don’t know how things will change from day to day, even hour to hour.

Some resorts are now taking to social media to stress “we’re still open”.  One resort even tried to inject a little lightness into the present situation by posting a picture of a skier in googles and ski gloves and advising skiers to “wear a facemask and gloves,” another, small Norwegian centre, posted that the only Corona there was the sort you could buy in their store.

Some ski areas are also saying that though their lifts are closed and ski areas no longer patrolled or slopes groomed, people can go cross country skiing, tobogganing or ski touring at their own risk. Its unclear what insurance policies would make of that.

Most resorts that remain open are stepping up health and safety measures  These vary from resort to resort but may include closing, or limiting access to, public areas, closing nurseries, limiting T Bar use to one person at a time and similar restrictions on chairs and in gondola cabins.

On Saturday evening (March 14th) French resorts went from saying they expected to stay open to being told they had to close at midnight that night by the French government.

Many of the big resorts in the US and Canada have also closed. 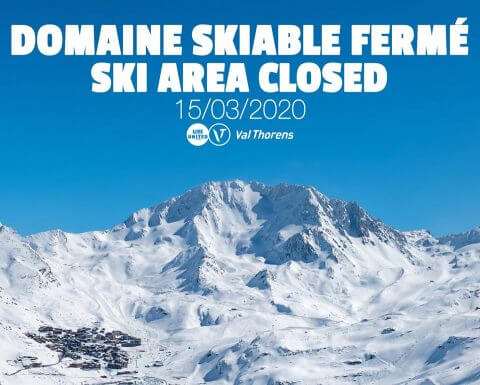 In Switzerland almost all ski areas announced they were closing early for the season there, from last weekend, due to the latest government advice there.

All ski areas in Austria have also closed from last weekend too.  Initially it was Tirol region, then Salzburgerland and Vorarlberg announced on Friday 13th March, but later in the day ski areas in other ski provinces like  Styria and Carinthia where resorts like Schladming, the Dachstein Glacier and Bad Kleinkirchheim are located also closed.

In the Pyrenees, all ski areas are now closed since French areas joined Andorra and Spain in closing all areas.

So where is still open?

In Scandinavia  all Norwegian ski areas have closed but most Finnish and Swedish ones remain open at present.

So far  Scotland’s centres are open and whilst most resorts have now closed in the USA and Canada, although some are currently still open too – but that’s changing by the hour.