It’s not widely known that the skiing in Pakistan can be rather good. Although the general perception is of a hot, crowded country, there are large mountainous areas of stunning natural beauty. And in the 1990s a small ski resort was built at Malam Jabba in the Swat Valley with the help of Austrian expertise. Sadly that was destroyed by the Taliban almost a decade ago, but they were driven out in 2009 and now plans are afoot to re-open the centre for winter 2016–17.

In fact plans for the ski area at Malam Jabba date right back to 1962, although it wasn’t until 1998 that the 4★ hotel located at an altitude of 2500m finally opened. It sat on a small ridge overlooking beautiful scenery high above the Swat Valley in northwestern Pakistan. Soon Malam Jabba became a popular retreat for people, especially families and students from Islamabad and Peshawar. Many of them took the 4- to 5-hour drive to the resort not for skiing but just for the snow. Malam Jabba gets a lot of it; the snow cover can reach up to 3m. Even in summer, the place was packed with people who just came for the fresh mountain air, took a ride in the chairlift to the summit ridge (2670m) and enjoyed the stunning view of Nanga Parbat. 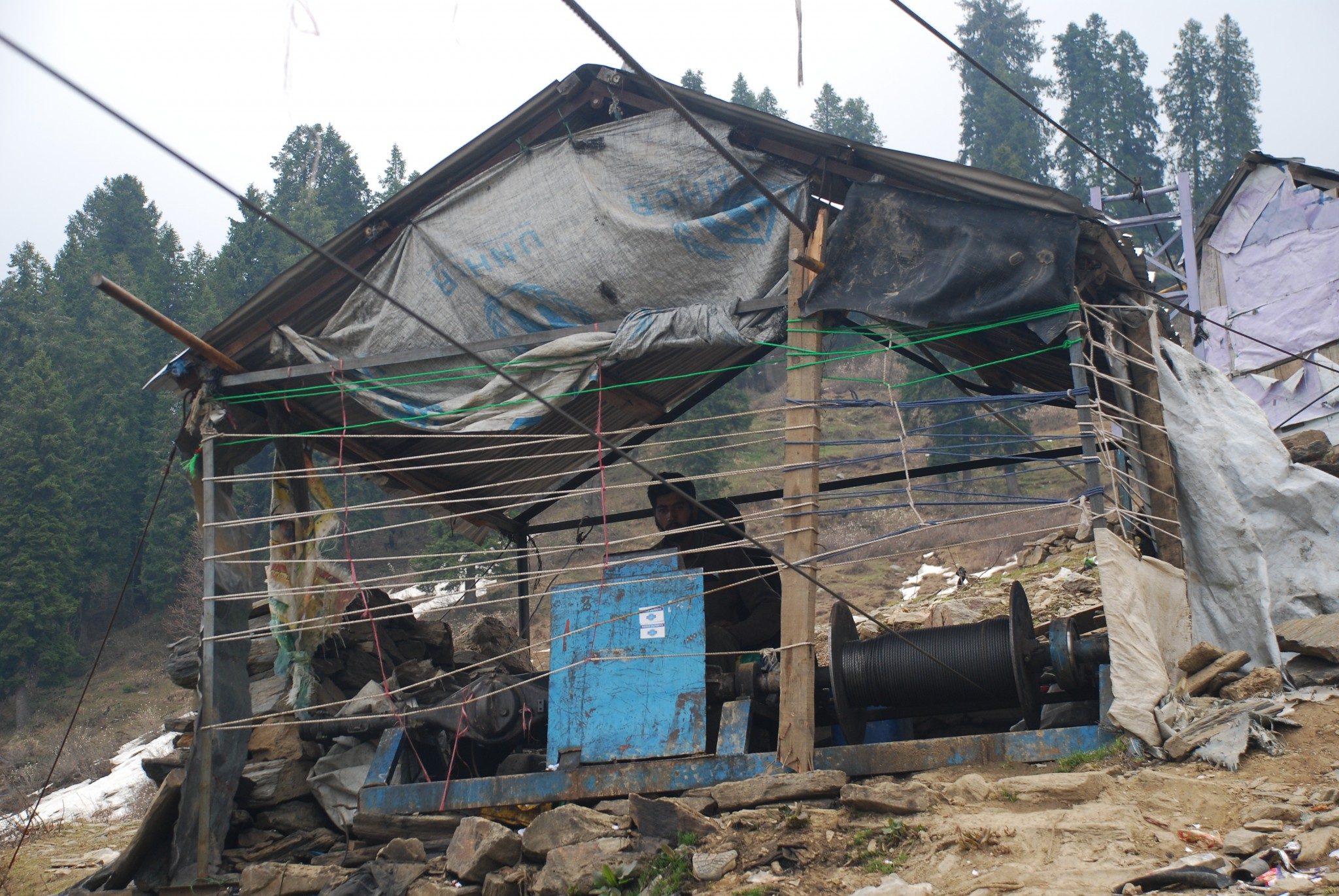 It all came to a halt when the Swat Valley fell under the sway of the Taliban in 2006. As they looked at skiing as un-Islamic, they blew up the hotel, the chairlift and the grooming equipment. In 2009 the Pakistan army regained control over the Swat Valley, but it took another five years before the contracts for the reconstruction of the resort could be signed. A large tobacco company from Islamabad, Khyber Tobacco, won the tender to develop Malam Jabba under a lease from the Pakistan government.
The company is to build a 4★ hotel, another 3★ accommodation, a new chairlift and run the place as a four-season resort. In exchange the government has promised to rebuild the road and take care of the power supply.

When I was approaching Malam Jabba in April 2015, I could feel that the government had not yet fulfilled their obligation. “Road” was quite an exaggeration for the rough track we crawled up at a snail’s pace. I was part of a delegation of five foreign experts brought in to support Khyber Tobacco, who, unsurprisingly, had no experience in the development of ski resorts. Our little convoy was escorted by army jeeps. Two guys with machine guns sat on the back. The Taliban are not ruling the Swat Valley anymore, but that doesn’t mean that they have completely vanished. That’s the reason why the valley officially is still a no-go area for foreigners. However, to me the driver of our car appeared to be the most dangerous factor of the whole trip. 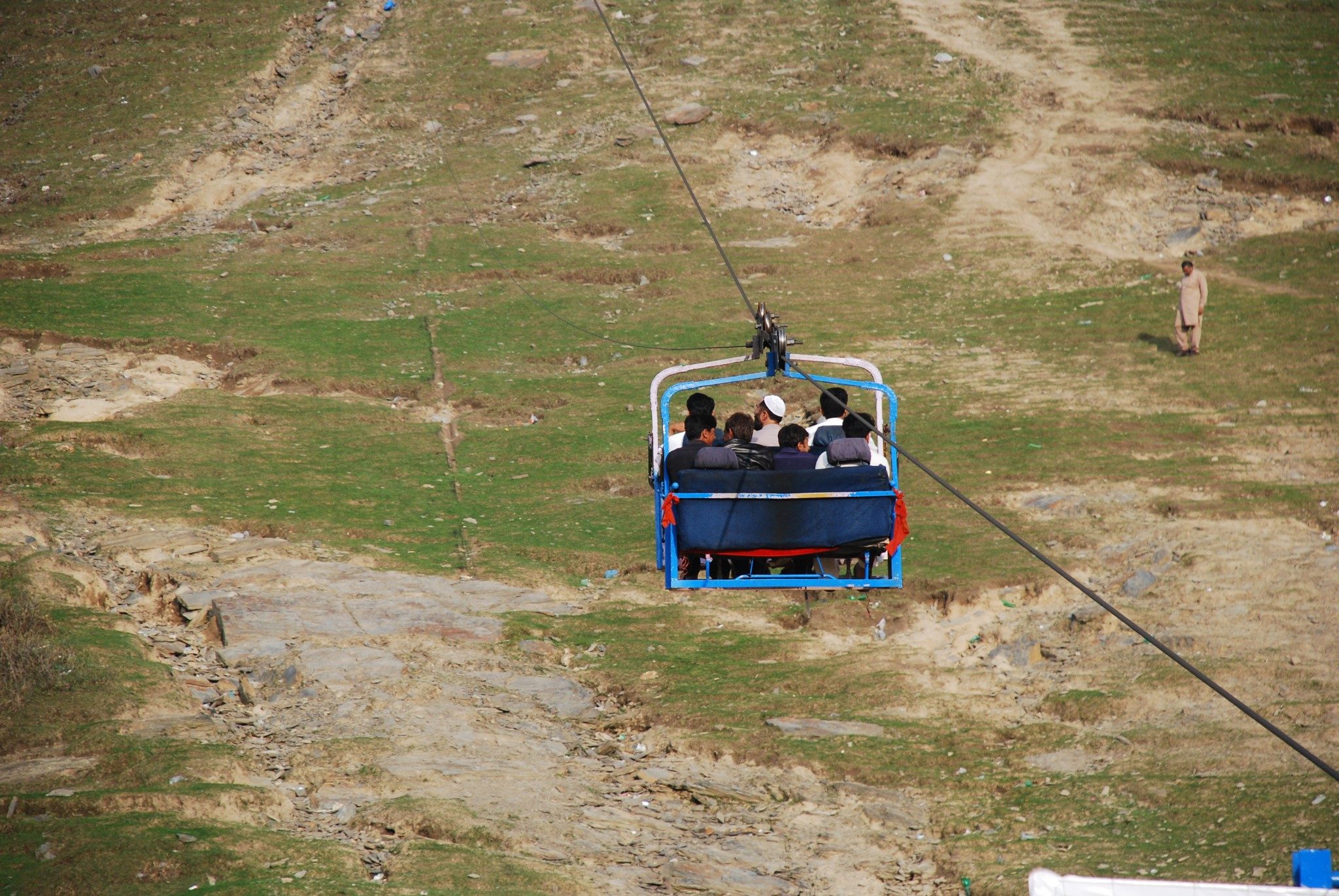 But we made it in one piece to Malam Jabba, and to my surprise there was a lift operating, carrying tourists halfway up the wide ski slope. The lift consisted of a cable from which a single open gondola with two benches was suspended, each carrying four people. Powered by an old car engine, the haul rope was touching the ground in the middle of the track while the chairs where loaded at the bottom. The cost for the ride was 100 rupees – about €1 or 70p. Given the average earnings of a well-paid factory worker in Pakistan are about €100 to €150 a month, this wasn’t cheap.

Nevertheless, even on this Tuesday outside the holidays there were lots of tourists riding the chair. Many others walked up the hill in order to approach the few spots of snow remaining in the upper part. Some of them stuffed snow into plastic bags in order to bring some of it down to the valley, others were sliding on anything they could think of, and there were even some skiers. 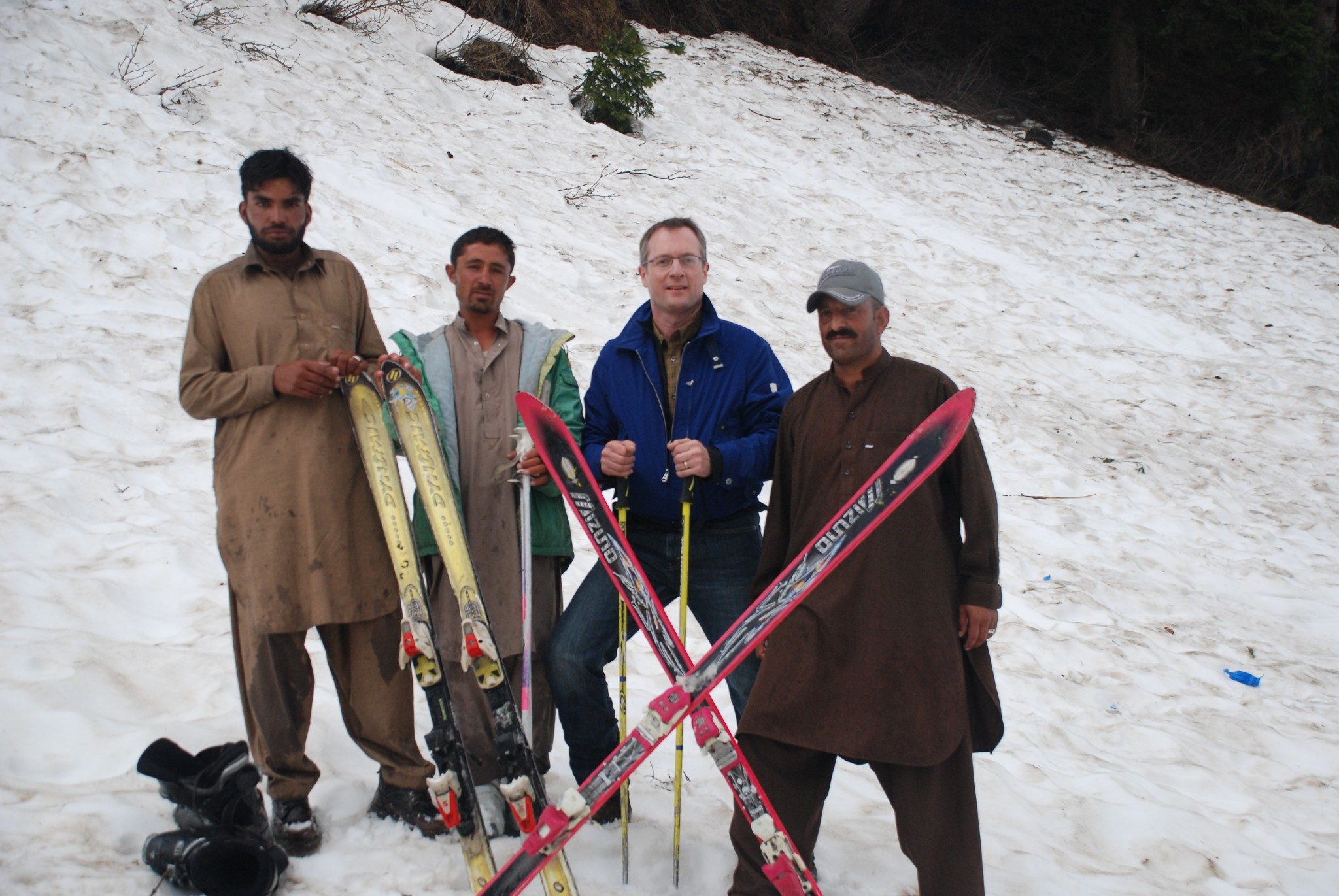 Local guys were waiting on the snow spots with rental equipment. I went over and they had a pair of white rear-entry boots for me. Not exactly my favourite, but who cares when it comes to the chance to do some turns in the Hindukush for the first and probably only time? The skis were from the era before carving – long, narrow and with no spring left in them. The bindings were defunct, but with the aid of the friendly rental guy I could attach the boots to the skis. After 150m, one ski just came off and went down the hill quite far, as it was missing its brake. But fortunately the source of income for probably a whole large family was safely recovered.

The Swat Valley, especially the small villages sprawling across the steep slopes above it, is a poor region and that’s the reason why Khyber Tobacco is not only rebuilding Malam Jabba but also planning to build a hospital and a school for girls – the valley is home to Malala Yousafzai, the girl the Taliban tried to kill because she was fighting for the right to an education. 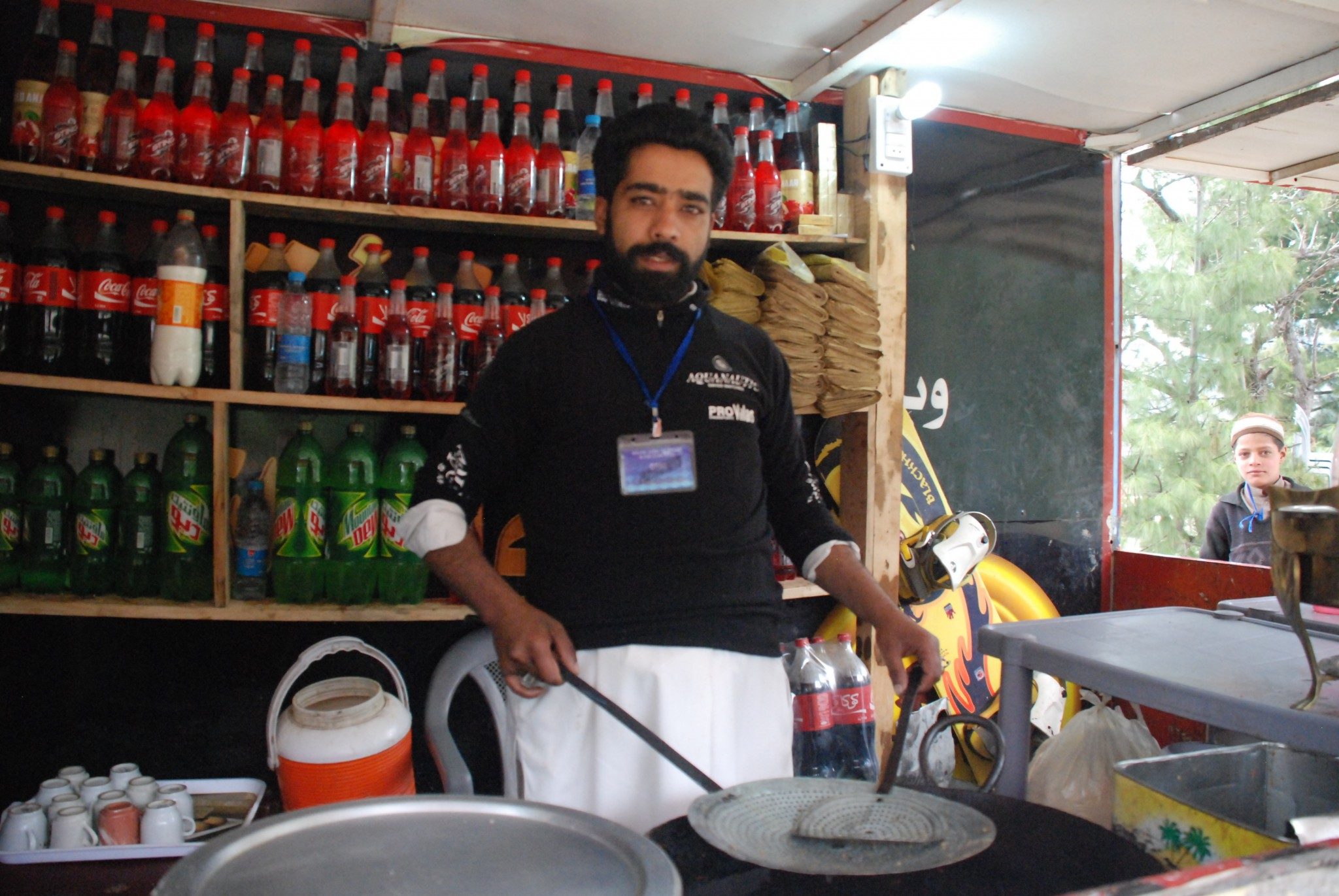 Most people in the valley are very proud of her, and they are also favouring the redevelopment of the resort because it promises jobs and income. The success will also depend on the security situation. Right now the army presence is very high, but still our original plans to stay at the Swat Serena hotel in Saidu Sharif, the closest existing hotel to Malam Jabba, were changed as it was considered too dangerous to have five foreigners there at the same time. Whilst I was walking across the mountain in order to evaluate the terrain for ski slopes and summer attractions, there was always a protective shadow following me, armed with a machine gun.

When we reached the platform at the top of the former chairlift, he asked whether we were interested in seeing one of the Taliban shelters from the war. It’s just a hole dug in the ground but it offers a good view of the little ridge further down where the remnants of the burnt-out hotel shell have now been taken down completely, making space for a new era of tourism. 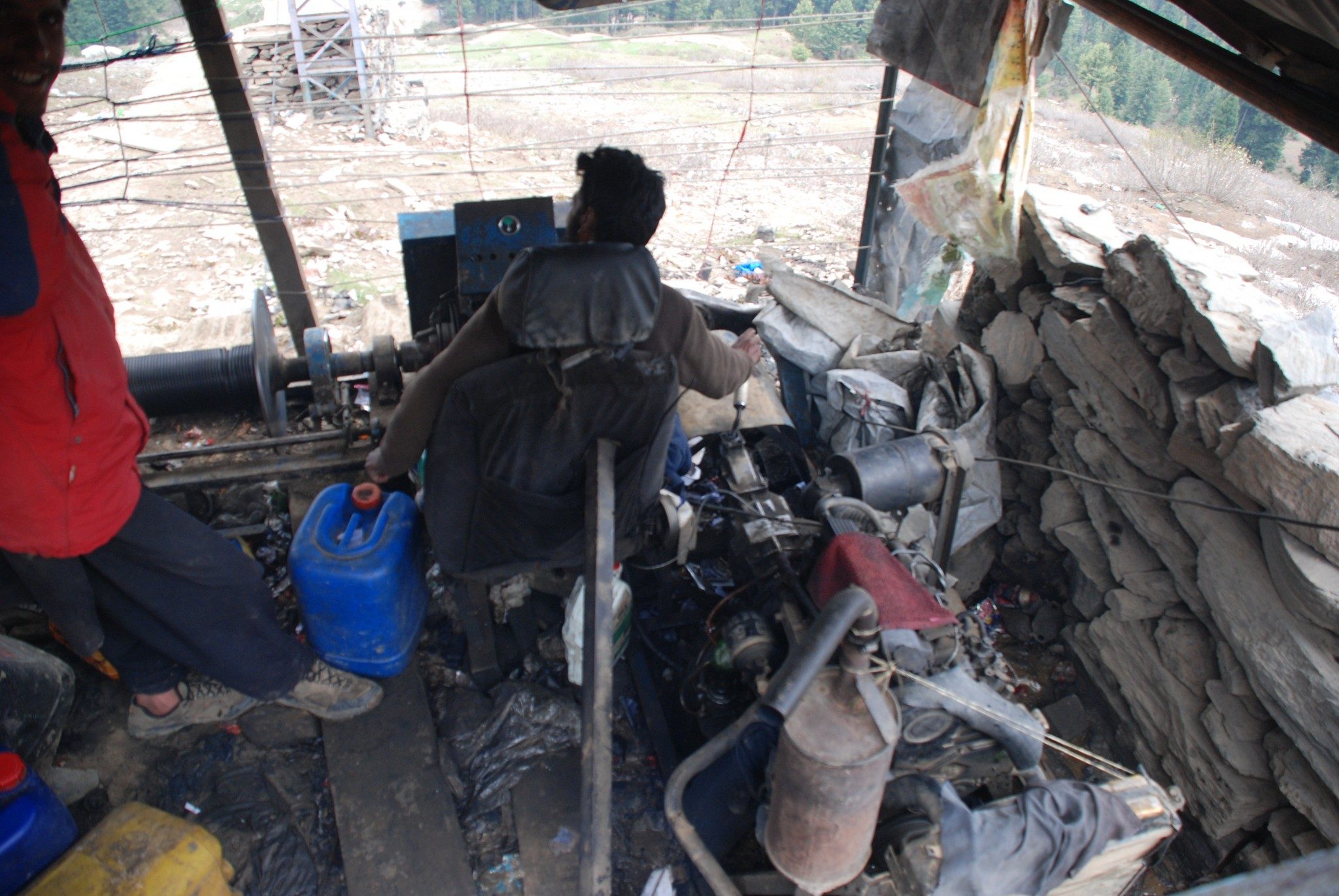 It is a stony path not only because of the horrible road to Malam Jabba, but also because it is not easy to find companies who are willing to supply and mount infrastructure in this unstable part of the world. European market leaders refused to deliver chairlifts, but the Chinese didn’t, and over the summer the construction of a new double chairlift is well underway. It will serve a steep slope and there will be a magic carpet accessing a beginner slope and another one on a sledding hill. The hotel won’t be ready for 2016–17, but there’s no question that Pakistani people will still flock back to Malam Jabba, against all the odds. 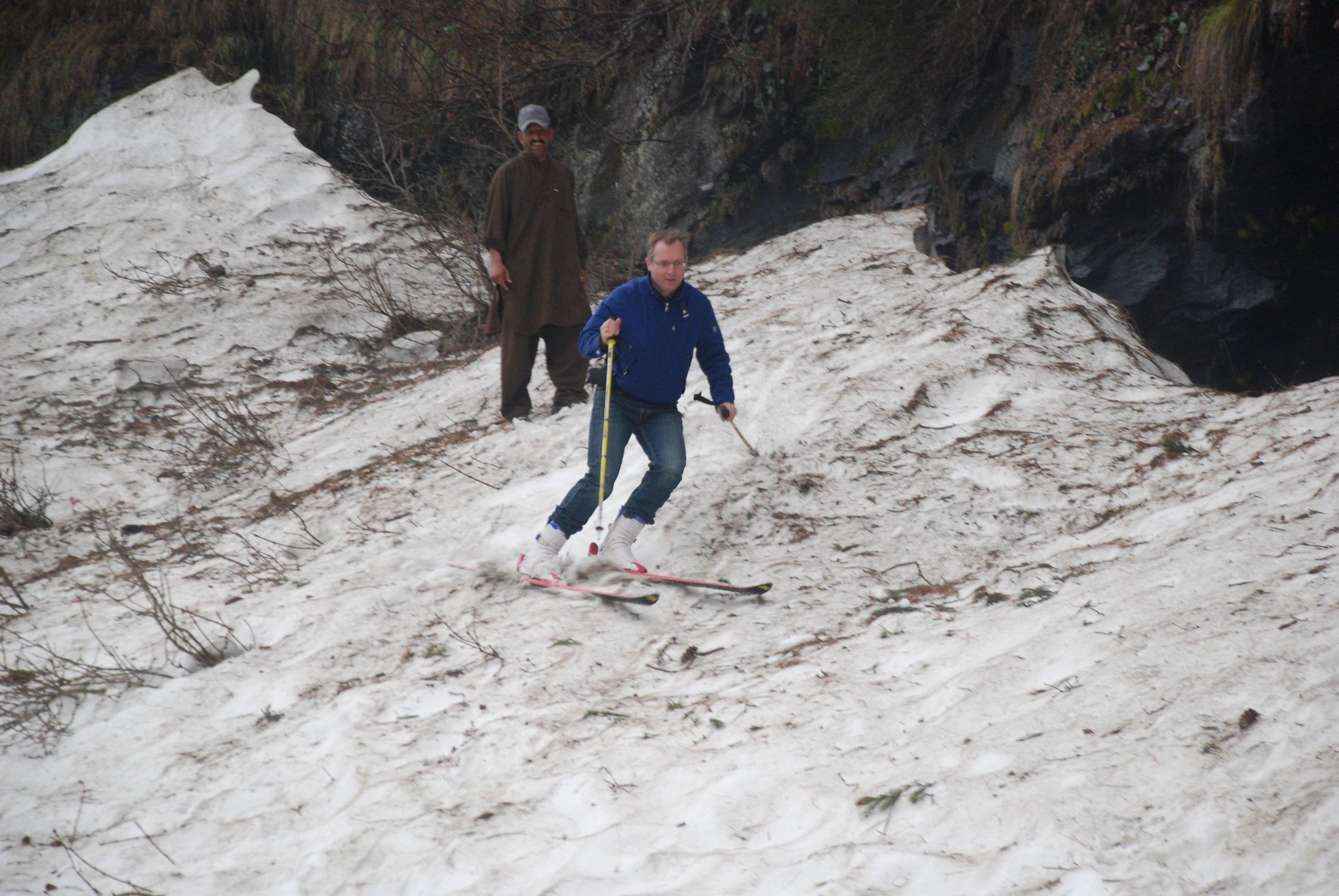