St Moritz is, of course, world famous as a ski resort that has drawn the world’s great and good to its high-altitude slopes for over a century.

Often mistakenly described as ‘glitzy,’ the famous Swiss resort which staged the first recorded winter sports holiday more than 150 years ago in the winter of 1864-65, and staged both Swiss winter Olympics, could more accurately be coined as ‘classy’ – the resort’s luxury hotels and boutiques ooze real wealth (along with ski history) but nobody is flashing it about.

St Moritz lies in a high-altitude ski region in South Eastern Switzerland close to the Italian border so benefits from a ‘Champagne climate’ of sunshine and snow. It’s also part of the large Engadine ski pass network with around 300km/200 miles of runs all included on the ticket. 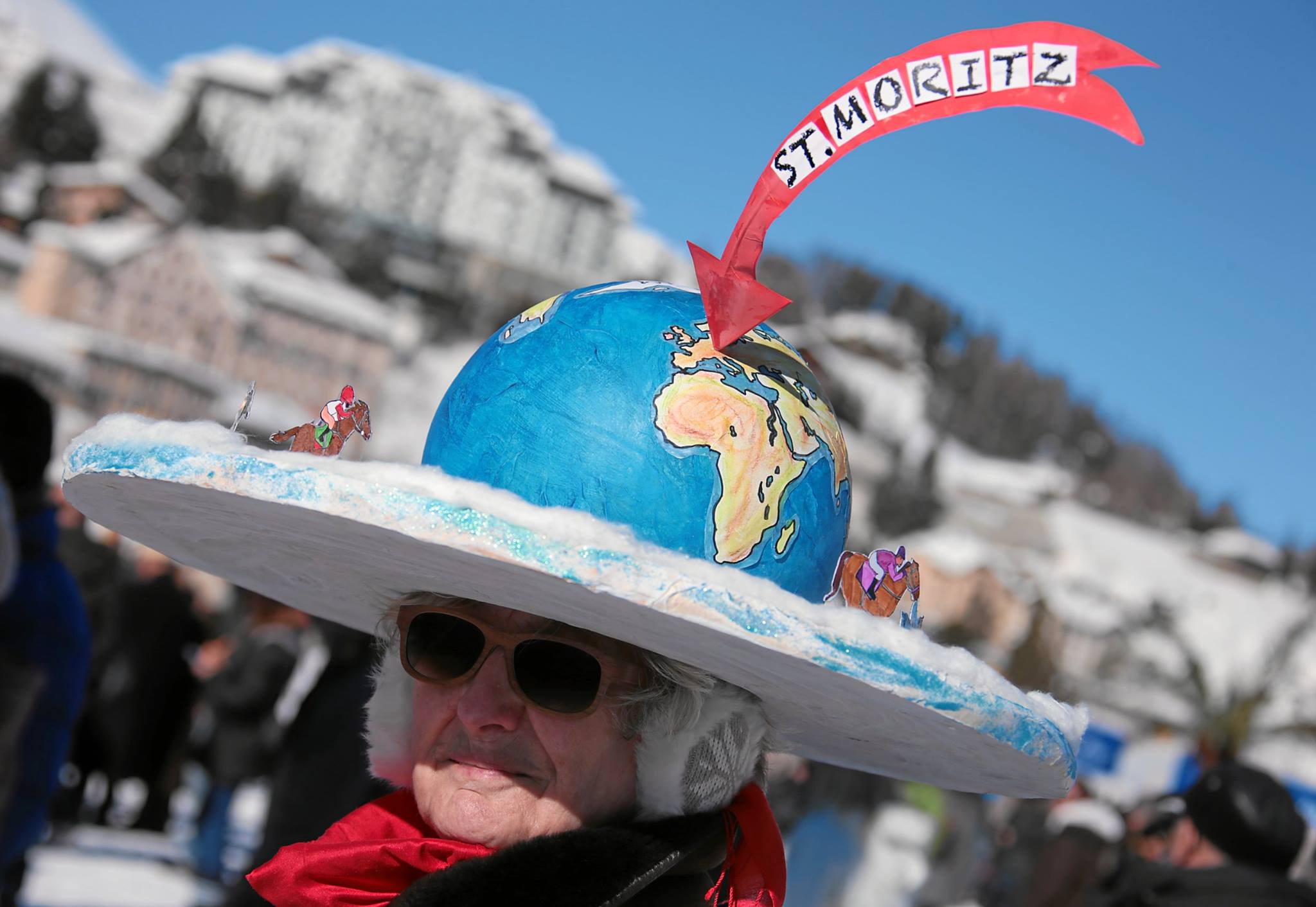 But the resort was famous as a winter resort before the first skiers arrived and even today less than half of visitors bother to ski. It’s a great resort to visit if you like empty slopes, particularly first thing in the morning when it’s not fashionable to get up and out.

In fact there is a season within the main ski season in St Moritz, a period of approximately six weeks from late January to early March when a number of events are staged, culinary festivals in the hotels and the famous White Turf races on the frozen lake when everybody who is anybody, darling, fills the resort.

This February there was an added attraction as the bi-annual FIS Alpine Skiing World Championships were back in St Moritz for the first time since 2003, so it seemed like a good time to visit. 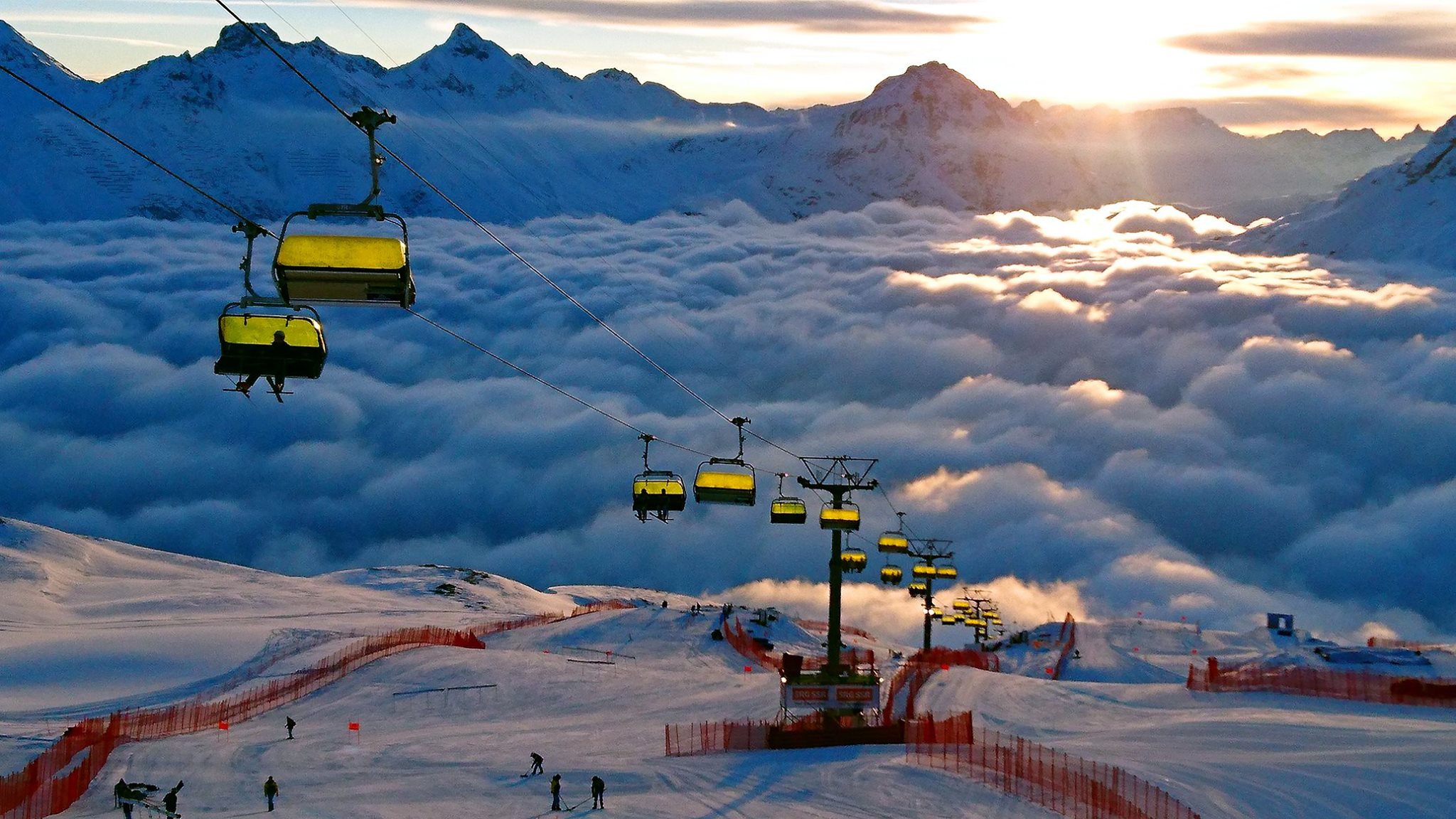 The town was buzzing with the extra visitors and the end of races was not too dissimilar to the end of a football match… lots of singing and a big influx of visitors into the town.

Up the mountain was a different matter. I suddenly felt 11 years old again watching ski Sunday listening to the cow bells and the familiar “hup, hup, hup “.

Actually Ski Sunday had the upper hand in terms of being able to actually see the race but wow what an atmosphere.

The slopes were very busy not just with people on skis but also traipsing around in ski/snow boots to get the best view.

It was the fifth time the Alpine Championships have been staged in St Moritz, the first time they were here way back in 1934.

We skied later in the day and I was really impressed that the slopes hadn’t become patchy or icy or mogully – they certainly know how to handle the lack of snow (St Moritz hasn’t had a particularly snowy season) and a lot of sun.

Despite St Moritz’s reputation for uncrowded slopes, heading down toward the Ladies Downhill slalom when everyone else was heading the same way really felt like hitting the M25 at rush hour, hundreds of people all trying to get to the same place at the same time, but once we took the lift back up we saw a winter wonderland all to ourselves. 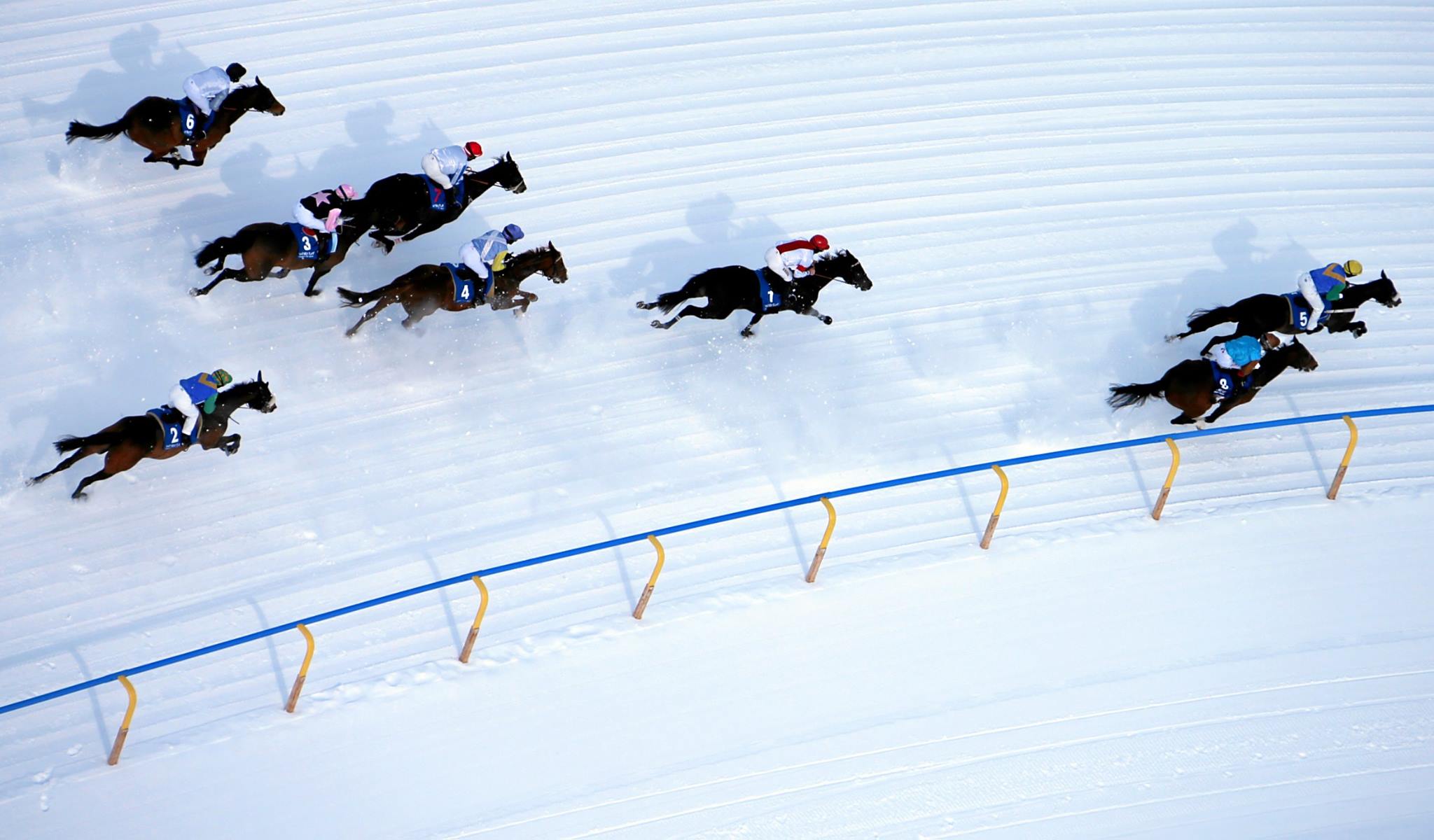 Possibly the most bonkers thing I have ever seen. White Turf is a horse racing meeting that’s staged over three weekends on the frozen lake of St Moritz with the Engadin mountains as a backdrop. The lake needs to have a minimum of 30cm of ice for the race to proceed – after all the weight of all the spectators, tents and vehicles involved – not to mention horses and jockeys – comes to 3,000 tonnes!

The race was first run in 1907 so this year marked 110 years. The middle weekend we attended had 7 races, 2 trotting and the rest racing. The first race is the harness race, where horses pull a ski mounted buggy containing a jockey.

There are also your conventional flat races (albeit on snow and ice) but the most crazy race is the skijoring, unique to White Turf, where the horse pulls the jockey behind on skis!

The 2017 race on 19th Feb was noticeably quieter due to the FIS World Championships taking place at the same time but by the time the skijoring race started the track was lined with spectators. 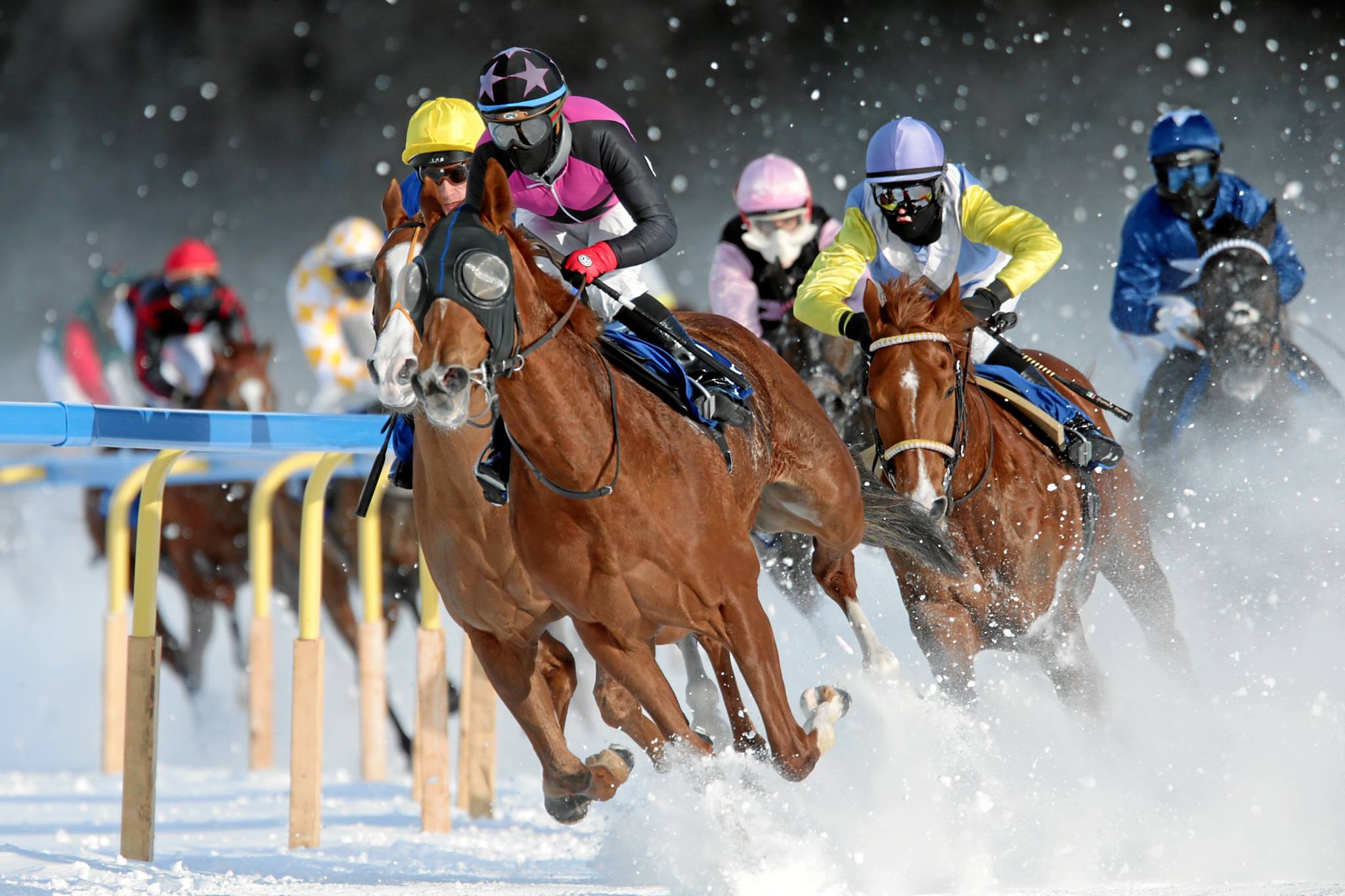 How do the horses manage to race on a frozen lake we wondered? We spoke to John West (a British trainer) who said that they “can’t really train the horses for racing on the ice” but they do wear special shoes which have a crampon attached on the edges.

Back to the skijoring, it’s a little crazy for the jockey as the first thing they have to contend with is going through the starting gate, then the first corner where the horses are still close together, the jockeys’ faces are somewhat protected from the kicked up snow by their goggles and also the colour coordinated flag attached to the “reins”. The aim is to accumulate points over the three weekends of White Turf with the winner crowned at the culmination of the third weekend.

White Turf is small scale compared to the likes of Ascot and Cheltenham on busy race days but this is a special experience. You are able to get incredibly close to the paddock to look at the horses and decide who to place your bet on if you can drag yourself away from the numerous tents for food and drink, discreet hospitality tents or the Badrutt’s Palace tent, the place to laze in the sun and drink champagne whilst the hotel itself, (Badrutt’s Palace) looks over the lake. It’s possibly the most intimate race meeting I have ever attended.

If you’re rich enough the idea is to have fun, wear as much fur as you can lay your hands on, drink champagne and eat oysters. But rich and poor alike are welcome to join in the excitement of the races, breathe in the mountain air and be lucky. There is nothing like it!

Our base for our stay was the Hauser Hotel, located just a 200 yard walk from the funicular up to one of the main ski areas, Corviglia.

It’s a good idea, we found, to get your gear rentals from the Ski Service hire shop next to the station as they have another outlet on the mountain at the top so it’s easy to make returns or get repairs done.

The ethos of the Hauser Hotel is evident everywhere, it’s essentially a Mecca for foodies. All produce is locally sourced and given an “etichetta”, a rating based on how local the produce is, how organic (if possible) and many other factors which keep Hotel Hauser grounded. Each diner has a place map which shows where key local menu items come from. We sampled the local speciality of

Calpuns for lunch which was a dumpling wrapped in Swiss chard and in a cream, pancetta and vegetable sauce.

The homemade elderflower cordial was amazing. 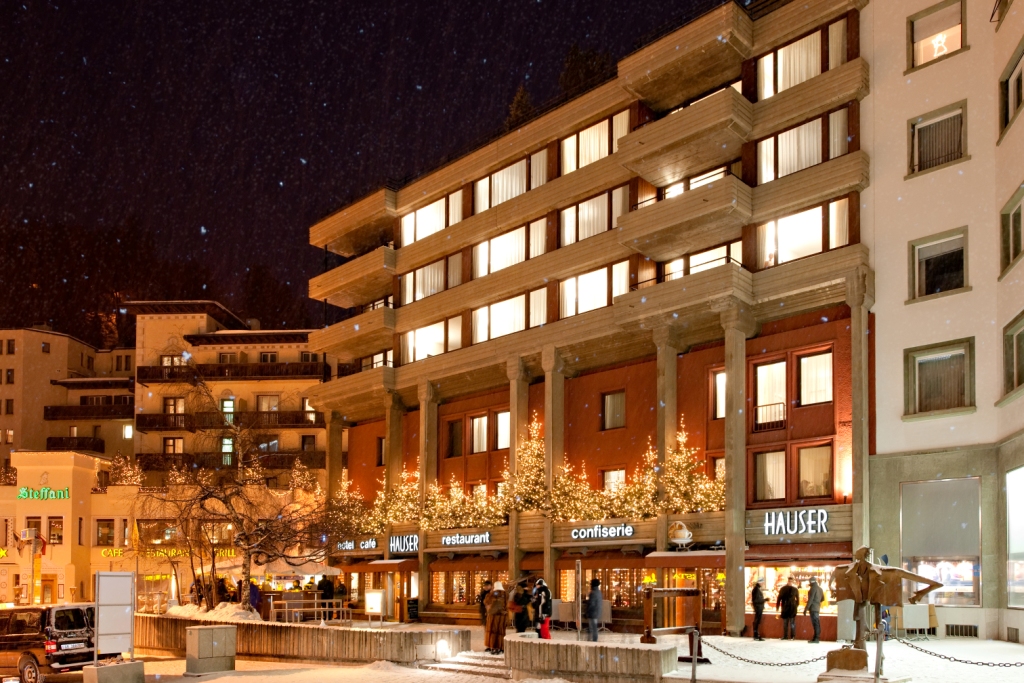 Friday and Sunday nights they have the Hot stone buffet or Piöda, mouth watering selection of meats including zebra and crocodile along with usual beef, pork, chicken, venison, quails eggs, fish and lots of veggies and fruit. Each table has its own locally sourced stone (one between 2/3) which sits in a specially locally designed and made metal stand. The Haus(er) wine is fantastic and has a label (designed by a local artist) to match the painting on the wall in the restaurant.

The Hauser family first established themselves in St Moritz in 1892, opening a ‘Konditerei’, confectionery shop which is still here today. It is the perfect place for a coffee and a delicious slice of home made cake or an eye-catching pastry. The Hauser pastry chef makes all the chocolates, cakes and breads. The Engadine nut cake is a local speciality and the hand made chocolates are to die for. They even have their own chocolate moulds which show the Engadine mountain range to scale. The sandwiches are really tasty too.

If you are out exploring or skiing all day the Hauser’s will supply you with a delicious packed lunch to enjoy up on the mountain, by the lake or wherever you are exploring. If you don’t take the packed lunch we found that on our peak visit dates the restaurants were very busy up the mountain so booking was definitely advisable, especially for larger groups. Chammana does the best goulash soup, has fantastic views and is sheltered if it’s windy.

Do ask for a pillow menu – this has nothing whatsoever to do with food and everything to do with sleeping! I picked a pillow with pine wood shaving. They are supposed to offer you a deeper more relaxing sleep… I wasn’t sure the first night but once I was used to the feel (it initially feels a bit lumpy) I slept like a baby. The moonwood room, that uses pine wood that has been cut during a full moon, has a very delicate pine smell which instantly makes you feel relaxed. It is like taking your first breath outside on a woodland walk. I woke every morning feeling refreshed and ready for breakfast!

Breakfast was a feast. There are home made Gipfelis that are a Swiss take on the French croissant , homemade jam perfect 4 minute eggs still hot and homemade Bircher muesli. 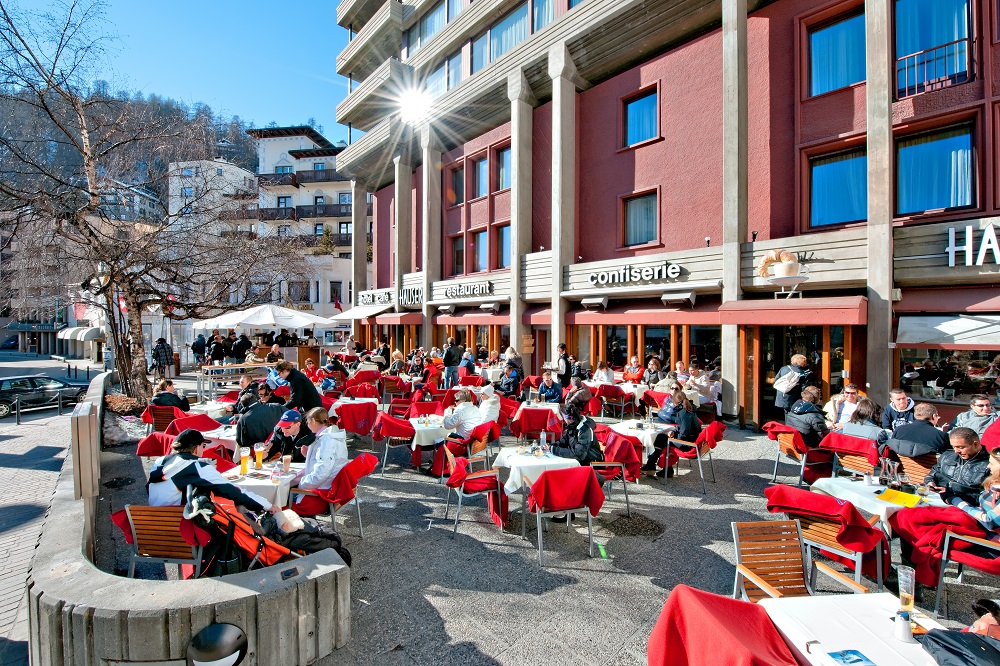 Outside, the Roo Bar terrace is open all day and happens to be the first and possibly most popular “apres” ski bar in the resort. It is always busy and has good outdoor heaters. The Hauser Glühwein is obligatory but there is also a great selection of local beers, wines, spirits as well as Breil Pur Gin distilled locally and available in the shop.

As the world championships were being hosted in St Moritz, the hotel this year set up the Cow Bar, a super cool apres ski bar with live music, tree stumps as stools (if you weren’t dancing) wood shavings on the floor and cow hides on the walls, with a capacity of 250 people it was packed every night and with good reason… fun, fun, fun. 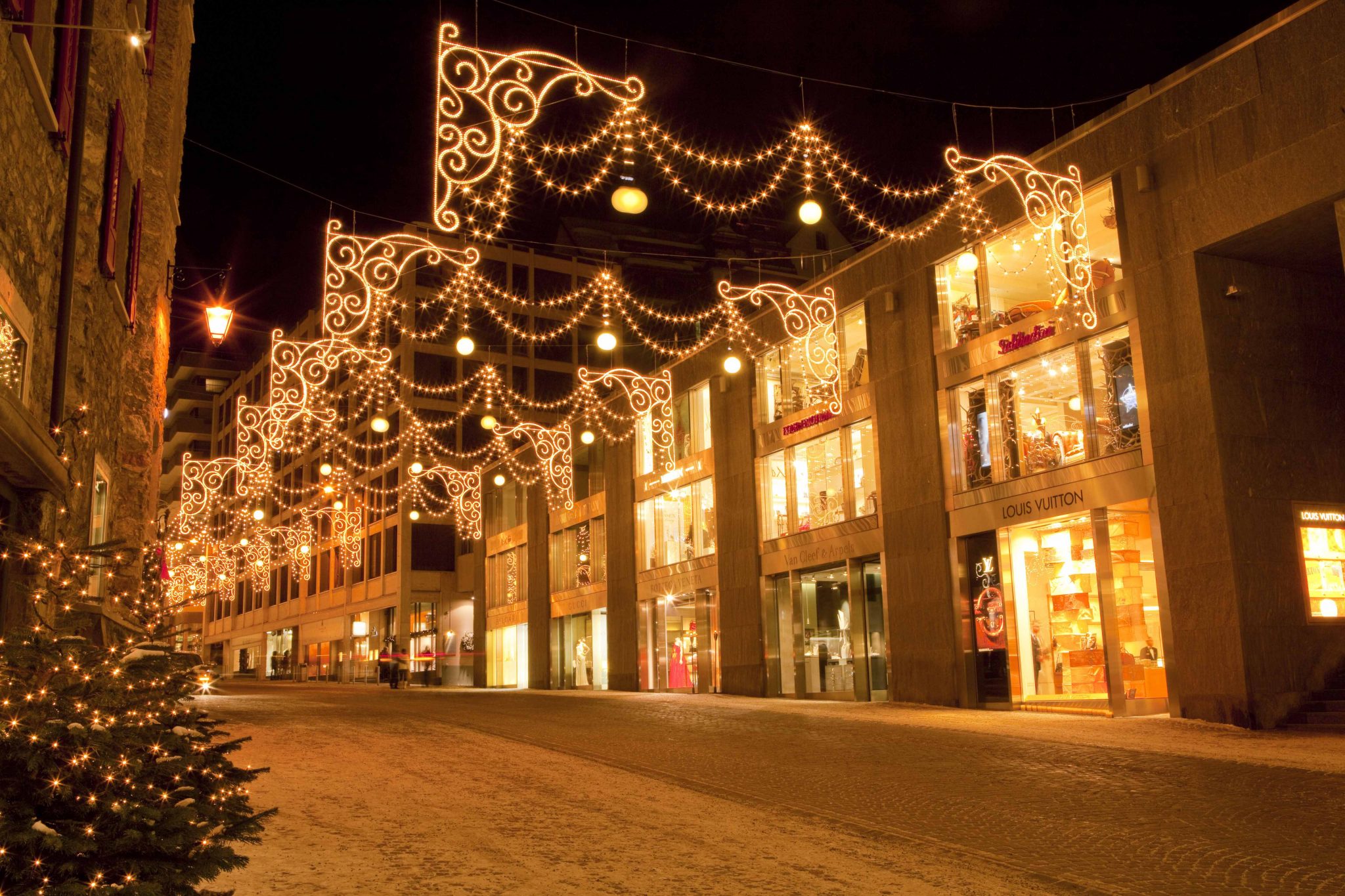 In the end I think what is so special about St Moritz isn’t the money (there is a lot of that) or the scenery (a given) or the ski slopes (obviously sensational as they are holding the World Cup here) but it’s the sense of community. Everyone knows everyone. When the snow came down just before the World Cup it was the local hotel owners and residents who were out on the slopes in their skis sliding the excess snow away so that the slopes were returned to their former (pre-snowfall) glory ready for the races. It’s the locals who decide to have pop up bars to accommodate the extra

visitors in St Moritz style and the same locals who have been hosting an incredibly successful jazz festival in the summer.

It was a short trip but I left wanting more… I definitely wanted to ski more. The town is beautiful with lots of heritage, it’s where winter sports holidays started, the Cresta Run, the Olympic bob, night time luging into a chocolate box village and the wonderful White Turf!