Becca Robinson is a former young ski racer who is now turning her hand to ski journalism.  Becca has skied many of the famous ski race courses in Europe and chooses her four favourites for us here.

The FIS World Cup downhill slopes in race condition are not doable for normal skiers – in most cases not even for advanced skiers. Typically, their surface shines in pure ice and with the sun beaming down, losing your edge means you are up for a long swift slide into the safety nets. With weather in recent years being more unpredictable and leaving more brutal chapters in the courses’ history, there is never a dull moment in Alpine ski racing. Yet, many of these races are based in beautiful idyllic resorts and some can be skied by anyone once the races are over and the surface reverts to more like a normal piste.

Just above the valley of Lauterbrunnen, Wengen host the longest downhill race in the FIS world cup tour; The Lauberhorn. A race known for its speed, athletes can speed through the course in just two and a half minutes, with the fastest recorded speed reaching 161 km/h, which was notably set by Frenchman Johan Clarey in 2013. With the race starting above the clouds and views of the impressive Eiger mountain, it is no wonder that the Lauberhorn race is one that is many peoples’ favourite.

Wengen is a resort that is suitable for all ages and families. It has a ski area spanning 206km, there are a range of slopes acceptable for beginners, to off piste powder experiences for the more advanced. A truly exciting part of this resort is that many can ski the Lauberhorn race ran (although the start is normally cordoned off), this allows many to gain the experience and thrill of what it is like to ski a world cup race slope.

Adding to its charm, the resort is lined by shops and several large Victorian-style hotels and can only be reached by cog railway meaning it is a resort that is largely traffic free. The train then continues up the mountain, as one of its ski lifts, towards Kleine Scheidegg and to the Jungfraujoch; the highest railway station in Europe at 3,454m.  By being so accessible, it allows for skiers and non-skiers to reap the benefits of all Wengen has to offer, making it a perfect, quaint resort for families with young children and tourists. The best way to travel to Wengen is via train, of which three are needed from Zurich airport. Whilst this sounds long and exhausting, in fact, it is quite the opposite: you can experience more of Switzerland and create an adventure out of the journey. In many cases it becomes a memorable part of the holiday, and an adventure especially for youngsters.

Cortina is rich in history and culture, with old Victorian hotels and is one of the oldest ski resorts in Europe. The resorts backdrop are the Dolomites, this creates a stunning view to all who visit.

Cortina is also well known for its regular Women’s World Cup tour on the Olympia delle Tofane and hosted the Alpine World Championships in 2021. Not only this but in 2026 the resort will once more host the Winter Olympics with Milan. The Olympia delle Tofane slope starts from an altitude of around 2364m. In the upper part of the slope there is a remarkable feature- two large rocky ledges. This is where the Tofana Schuss is located. Athletes can develop speeds of up to 140 km/h. The race then works into the forest and after the diagonal traverse, the skiers approach the finish line, which is 768m below the starting point. In total the Olympia delle Tofane is 2822m long.

Cortina is also widely known for its ability to be open until late spring, with past records showing there was still snow in July. Not only this, it also has a huge selection world class shopping, from designer stores to small boutiques. Yet if night life is more your thing, there are an array of bars to keep you occupied until the early morning. Cortina can also be a great base for hiking and trekking with mountain routes equipped with various fixed cables, ladders, and bridges. With the Via Ferrata, you can explore isolated unreachable areas. This means unparalleled adventure and breath-taking views all year round.

A popular route to take when travelling to Cortina is with the Cortina Express Fly Bus, which will take you straight to the resort. In the high season, the bus routes are extended to the south: Rovigo, Ferrar and Blogona and to the north: Alta Pusteria and Upper Badia Valley.

Kitzbuhel, is a 750-year-old medieval walled town, surrounded by breath-taking scenery. A resort full of history and tradition and a favourite amongst ski racing fans for the Hahnenkamm Downhill course on which the World Cup Men’s Downhill is held each January. Not unlike Wengen in Switzerland, the town is largely car free, with main streets lined with restaurants, shops and hotels, some of which have been standing for centuries. The old town is particularly enchanting at night when it assumes a real fairy-tale image.

There are over 179km of groomed pistes and with Kitzbuhel investing in modern, high speed lift system there are many people who can benefit. The Hahnekamm’s Streif run is not everyone’s cup of tea, but there are many runs for intermediate skiers, with a variety of blues and reds to discover. If you feel inclined you can head off piste with a guide to discover some 200 s/km of terrain.

The combination of friendly locals and mountain scenery makes for an incredible stay in Kitzbuhel ski resort. With more than 50 modern lifts, 179km of Alpine skiing and a further 120 km of cross-country skiing, it is no wonder Kitzbuhel is a haven for snow lovers. Kitzbuhel also offers several lifts serving the green practice slopes, free of charge, allowing beginners to get to grips with the basics.

Yet for professional athletes who come from all over the world to attempt the notorious racecourse, the Streif is challenging and an incredible weekend of ski racing each year. It is a twisting run, filled with blind drops and daredevil jumps. In 2021, the race was held for the 81st time and is skiing’s ultimate test as speeds get up to 140kph.  The Mausefalle jump, has a gradient of 85% and launches the racers 80 meters through the air.

Kitzbuhel has an atmosphere that feels like a festival; with pubs and events attended by several celebrities. The quickest way to Kitzbuhel is via Salzburg, Innsbruck or Munich airports with short transfer times from all three airports. Transfer options range from private car hire, public bus and train services. 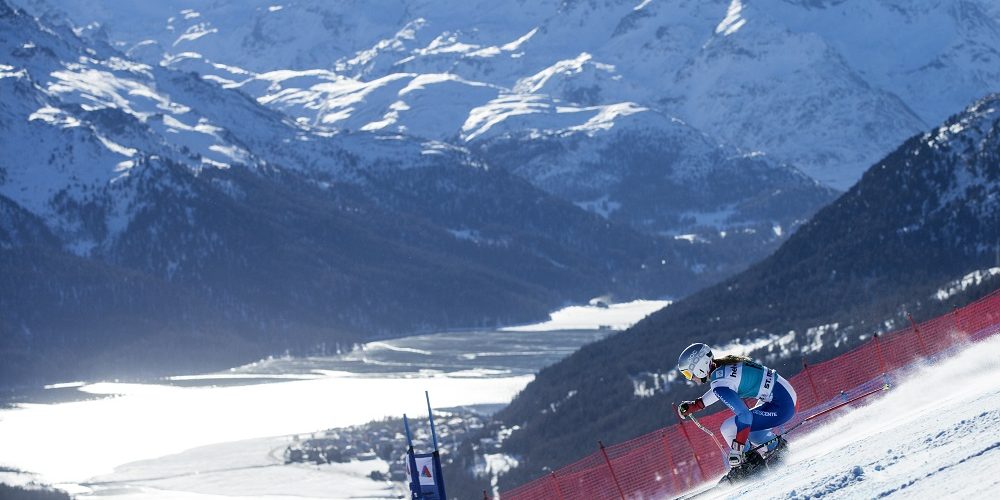 St Moritz, a resort famously known for its downhill racecourse start; Free Fall. While it is not a cliff, it’s the next best thing. It is the steepest on the world ski circuit and with the first 150 meters having a gradient of 45 degrees, it is truly a fearsome challenge. Racers can accelerate from 0 to 140 kph in just six seconds, that is faster than some cars.

To quote Bruno Kernen, the 1997 Men’s Downhill World Champion winner: “When you come up there and you look down, you think- s**t, it’s quite steep”.

Once the athlete has dealt with the start of the slope, there follows additional exciting moments. One tenth of the duration of the race the skier is in the air, which amounts to a total of 300 metres. Many believe the highlight after the Free Fall is the Rominger Jump, where skiers jump exceptionally far and almost feel as if they are flying. This ensures that St Moritz is a staple in the downhill race calendar.

Not only does it still stand as Europe’s most esteemed old money Alpine playground, but it also has become a modern Snowsports resort with a wider demographic of skiing and snowboarding visitors. The town is made of two parts; on the hillside, St Moritz Dorf, which overlooks the lake and the spa resort of St Moritz Bad on the southern shore.

In common with many resorts, St Moritz has three separate ski areas, with the closest and biggest area accessible by ski lifts directly from the resort, all of which are served by a vast selection of mountain bars and restaurants. There are black runs throughout the three areas, but the majority of the pistes are a varied mix of high-end blues and mid-range reds. Yet, there are more Snowsports on offer; the Cresta Run is a world-famous toboggan track and is one of the few in the world solely dedicated to Skeleton racing. Not only this but St Mortiz also has the world’s only natural Bobsleigh track, which held two Olympic games, showing there are great experiences to be had for those who come to St Moritz.

Away from the slopes, St Moritz is a place with a great selection of high-end hotels with terrace bars, shops and has numerous restaurants. So much so that St Mortiz has been featured in two James Bond films; The Spy who Loved Me and A View to Kill. The nightlife is equally well catered for; many come for the stylish cocktail bars and nightclubs. Alongside this there is also a well-established thermal spa and a leisure centre complete with a sauna and swimming pool. If you are more active there are winter walking paths, snowshoeing trails, ice skating and indoor tennis. Much of the town can be seen by horse-drawn sleigh rides and tandem hang gliding.