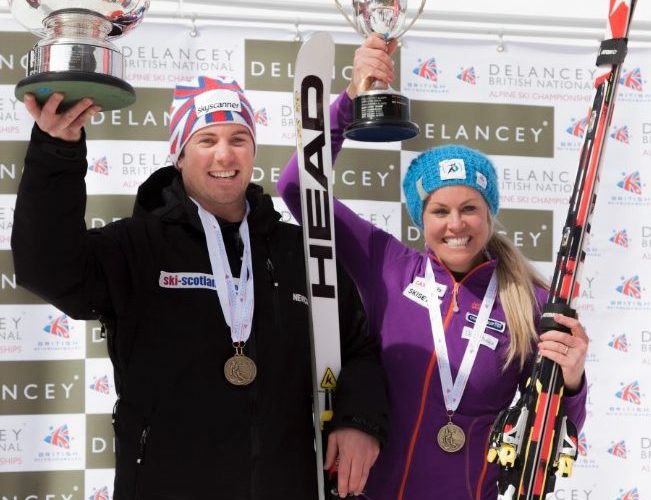 CDC Performance and Delancey are delighted to announce the four lucky individuals who have been picked to join Winter Olympian, Chemmy Alcott and her partner, Dougie Crawford on their next training camp, due to take place in Hinterux, Austria from 15th-22nd October.

Thomas Rascagneres (16) from Cheshire, David Cameron (14) from Tamworth, alongside Aimee Hudgell (18) and Lois Saunders (18), two inner-city apprentices from the innovative youth charity Snow-Camp, have successfully won places to join the camp, with all expenses covered by Delancey.

Over the last month, Chemmy and Dougie received a staggering number of applications from children aged 12-18 from all around the UK who have a passion for Snowsports and are eager to develop and improve their skills on the snow. Children were asked to fill out a series of questions including their favorite ski memory, what their life motto would be and how they think they would benefit from the camp. CDC and Delancey then collaborated during the painstaking task of narrowing the number of applicants down to just two, based on who they thought would gain the most from the camp.

Chemmy Alcott said: “We have been positively overwhelmed at the passion of young brits looking to improve their skiing and follow their dreams who applied for these bursaries. The selection process was really difficult since there were so many worthy answers and positive attitudes shown through various personal experiences. That Delancey have supported us throughout this process shows the importance of using sport to teach children invaluable life skills, has been incredible. Sport does have the power to change lives and we believe that all of the chosen four will benefit not just with their skiing but in their confidence for life during this experience.”

David Cameron, one of the chosen few, stood out from the rest with his sheer determination and commitment. Only having started skiing in early 2015 while preparing for a school trip, David was first introduced to the sport at Tamworth’s Snowdome when he completed a series of lessons. It didn’t take long for David to realise this was something he was passionate about, and he went on to complete all 9 levels of UK Snowlife Awards in just 4 months. Since May 2015, he has raced in 3 ski races (winning 2 of 3) and been asked to join the GB Ski X Home Nations Academy.

David commented: “Thank you so much, this is the best day I have experienced to date in my life. It proves dreams can come true and I hope you look forward to spending the week skiing with me as much as I will with you guys!”

Another one of the star applicants, Thomas Rascagneres, had started skiing when he was seven years old and fell in love with the sport straight away. He has progressed through fun races, club nationals and now converted to indoor skiing. Sponsored by Chill Factore, Thomas has been a member of the U18 Alpine Development Squad over the last two years. During his ski career he has earnt several titles including the British Indoor Under 18 Alpine Series Champion, Overall British Indoor Skier-Cross Champion, Youth Scottish Outdoor Skier-Cross Champion, Independent Schools Under 18 Ski Champion and Highest Ranked YOB British Indoor Ski Racer.

Thomas commented: “I am amazed and unbelievably happy. There were so many applicants and I am so proud to have been chosen by the team at CDC to receive this bursary. I feel extremely lucky to have been given the opportunity to spend time doing what I love and am humbled to get the chance to benefit from the passion and experience within the coaching team. I will work really hard and make the most of this experience. Thank you so much to everyone involved.”

Of the other two picked to join the camp, Aimee and Lois were carefully selected from the inspirational charity Snow-Camp, for being the most deserving inner-city graduates in the programme. Snow-Camp uses a unique combination of skiing, snow-boarding and life-skills programmes to enable young people to grow in confidence and self-esteem, while developing as individuals to make positive choices for their lives. Aimee, who has been involved with Snow-Camp since summer in 2015, only started skiing when she joined the programme. When she found out that she was going to Austria with Lois she said:

“When he (Gavin Hamner, programme manager at Snow-Camp) sat me and Lois down to tell us that we had been offered a place on Chemmy Alcott’s performance training programme I couldn’t believe what he was telling us. I had just started my apprenticeship with Snow-Camp and they are telling me I’m going to train with Chemmy Alcott and learn all about ski racing and performance. It’s mind-blowing. I’m really looking forward to expanding my knowledge in skiing, absorbing the whole experience and learning from Chemmy and the team. I am really new too skiing so to be offered this opportunity in such a short amount of time is amazing.”

Funded by Delancey, these four children will be flown to Austria to join other children on the October camp where they will be trained by Chemmy and Dougie, two of Britain’s best athletes, for a week and given the tips and tricks on becoming a successful ski racer. Not only will this help develop each of their skills, but also give each of them the chance to live out their ski racer dreams.

Summer Skiing at the Hintertux Glacier