Would you notice if your chairlift was running more slowly than usual? Adding seconds to your ascent is just one of the small ways that Les Arcs is trying to become more environmentally responsible, while maintaining its position as one of France’s leading ski resorts.

Slowing down chairlifts to save electricity when there are fewer skiers on the slopes is just one of the strategies employed by the resort to reduce their impact. It can cut electricity consumption by up to 20%, without making a significant difference to skiers. 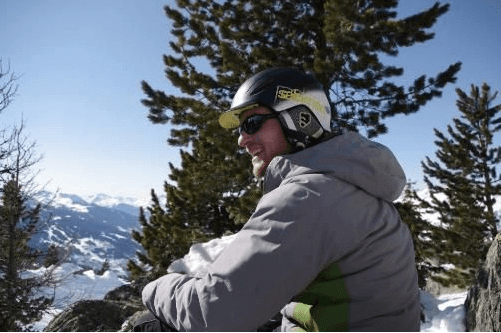 ‘Climate Emergency’ was the Oxford Dictionary Word of the Year for 2019 and as awareness has increased, so have the efforts by ski resorts like Les Arcs to show the steps they are taking to be more sustainable.

In spring 2020 the resort applied for ‘Flocon Vert’ accreditation. The ‘Green Snowflake’ sustainability label was developed by the Mountain Riders organisation in 2011 to let tourists identify resorts with exemplary environmental records.

There are 21 criteria resorts must clear to qualify for the label and many destinations fail in their application. At the time of writing there are only six ‘Flocon Vert’ ski resorts in France. Les Arcs is hoping to be the seventh and seems to be taking many of the right steps.

All ski lifts have been powered by 100% renewable electricity since 2011. The focus has recently shifted to generating their own electricity.

Photovoltaic panels were added to the new Aiguille Rouge and Varets cable car stations (above) in December 2019 and last winter also saw a trial in using hydroelectric power from the water flowing from mountain reservoirs to the resort’s snow cannons (below). 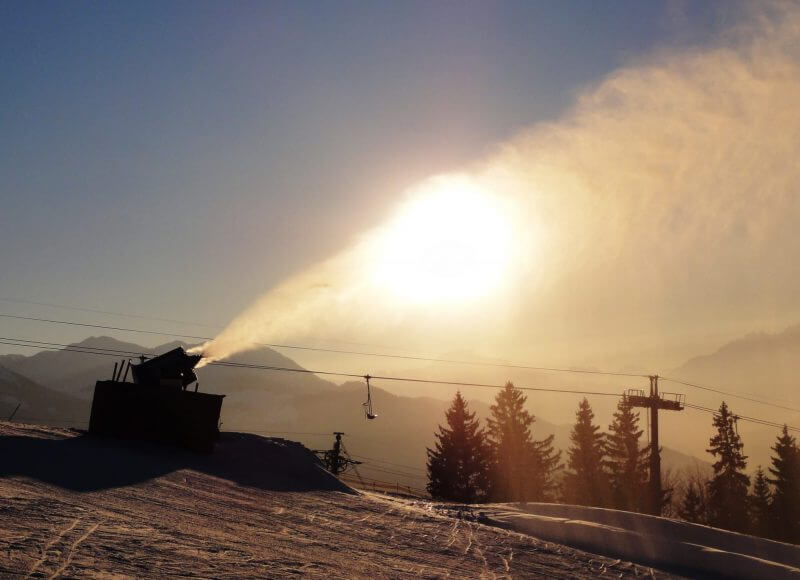 “We are trying to produce as much of our own electricity as possible. That’s why we decided to put 60 photovoltaic panels on the cable car buildings and for every new infrastructure project we’ll be looking at the potential PV capacity.”

The approach to man-made snow is another key component of Les Arcs detailed approach. Combining water, air and snow might seem simple, but the resort uses an algorithm developed by Head of the Snowmaking and Grooming, Florent Jacquemoud, to create the ‘right amount of snow, on the right slope, at the right time’ from their 600 snow cannons.

“We look at the current snow conditions, the expected weather, the number of people we expect on the mountain that day and the angle of the slope. Only then do we make the snow.”

“Man-made snow is mixed in with ‘natural’ snow to create a blend that is more resistant to melting and make it longer lasting.”

Reducing the energy required for grooming the slopes is more challenging. PistenBully launched the world’s first 100% electric piste basher in the summer of 2019. However, their prototype model currently lasts only 3 hours on a single charge – a long way off the usual 7-hour shifts that most resorts operate.

Until that time comes, Les Arcs has been focusing on using less-polluting alternatives for their snow groomers. The resort uses GTL (Gas to Liquid) technology. There’s no sulphur or metals, and no fumes and the mix is more cold-resistant and biodegradable. A trial with the use of the additive AdBlue also led to a 20% decrease in consumption.

And while electric piste bashers are not yet in use, Les Arcs is trialling a 100% electric snowmobile for use by the ski patrol. 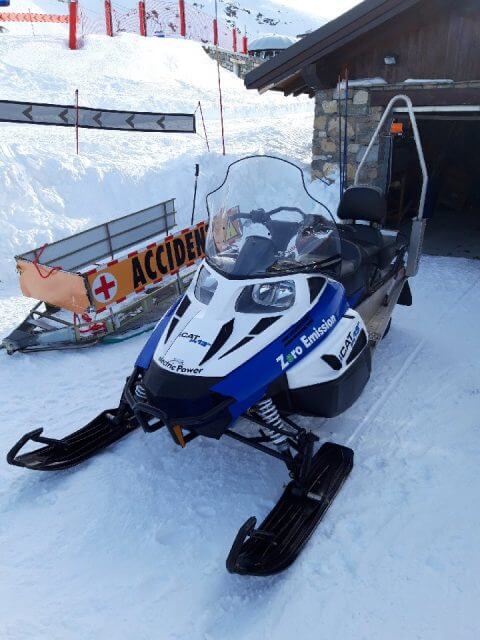 Another factor that may help to achieve ‘Flocon Vert’ accreditation is the resort’s commitment to hit zero plastic in restaurants by 2022. This is an ambitious target, but many businesses have already changed to using only biodegradable straws, cups and cutlery.

As an individual, choosing a ‘green’ resort can reduce the carbon footprint of your ski holiday. But choosing a low impact resort is just one way you can make an eco-difference: more significant is choosing not to fly.

Travelling by train can reduce the carbon footprint of your ski holiday by over 130 kg/CO2 per person. In the case of Les Arcs, it’s especially easy to travel by train to Bourg St Maurice and then take the 100% electric funicular up to the resort.

You can either travel at the weekend on Eurostar’s direct service, straight from London St Pancras to France, or simply take the Eurostar to Paris then change to a TGV.  Return fares to Paris are available from £88 with Eurostar. Trains from Paris to the alps can be booked with SNCF from €85.

Les Arcs passes the sustainability test, so the next question is, can you? 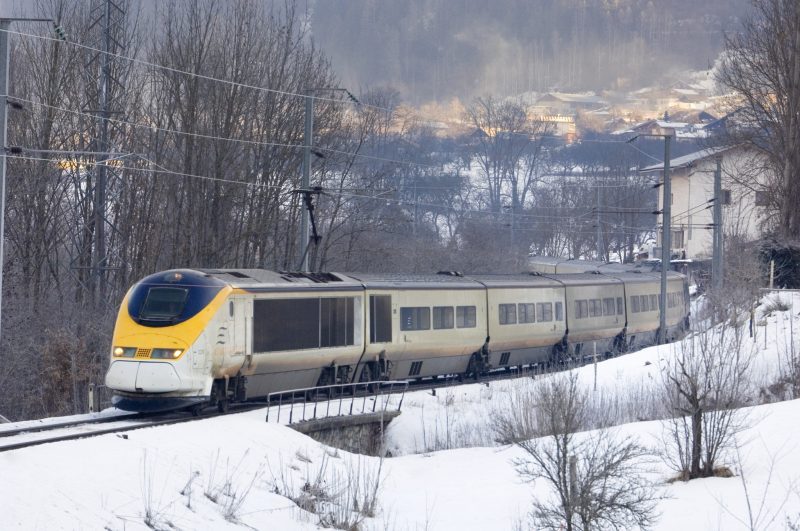 Iain stayed at the Base Camp Lodge in Bourg St Maurice and travelled by train.

More info about train travel to the Alps is available from www.skiflightfree.org