Germany’s leading ski resort of Garmisch Partenkirchen is “back in the brochures” for 2018-19 after many years’ absence with the UK’s largest ski holiday operator, Crystal Ski, offering packages there which are on sale now.

Germany has hundreds of ski areas with most of the larger centres located on its southern border with Austria.  Until recently they have been rarely featured in British brochures but Crystal now have two, having previously added the resort of Ruhpolding to their programme a few seasons ago.

Originally two separate towns, Garmisch and Partenkirchen joined forces back in 1936 to host the fourth Winter Olympics. Known colloquially as ‘GaPa’ for short, they still share Germany’s largest ski area as well as providing access to the country’s highest ski lifts on the Zugspitz glacier too.  World Cup racing still returns here each season too.

The local skiing is spread across two main areas:  the Alpspitze peak and the lower Hausberg and Kreuzeck peaks linked by a narrow track; higher up is the Zugspitz glacier, accessed via a cogwheel railway from town. A brand-new state-of-the-art cable car opened last year at the glacier too (pictured top). 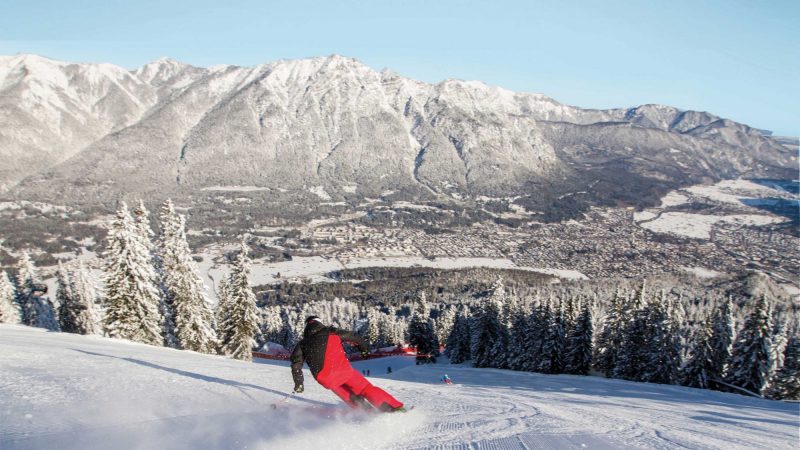 There’s a fairly even mix of terrain for beginner, intermediate and advanced runs, but since the reds tend to be the longest and best links, intermediates, in particular, will enjoy GaPa. New to the sport can stick to the dedicated beginner area or progress to the wide blues on the glacier. Experts will find several tricky blacks to challenge them – including the famous Kandahar run, which is used for the annual World Cup races and has a free fall section with a 92% incline.

The towns have retained somewhat separate identities. Partenkirchen has kept its authentic feel and cobbled streets while Garmisch tends to be a bit more modern. Both offer plenty of charm, with buildings painted with traditional frescoes, and shops ranging from bakeries to goldsmiths. There’s a variety of hotels to choose from, most offering a good 4-star standard.

Other attractions besides the ski slopes include a visit to the nearby Olympic ski jump, toboggan runs and the chance to hike on the old Olympic bobsleigh track.

A week’s stay at the three-star Hotel Rheinischer Hof costs from £775 per person (two sharing) including half board, flights from Gatwick to Innsbruck departing 5 January 2019 and transfers.