All three have operated the past two summers between lockdowns and reported record business with a combination of skiers and boarders and booming summer business from non-skiers who just want to get into the mountains.

Les 2 Alpes (below) has continued to build its summer ski and boarding on what it says is Europe’s largest skiable glacier with 90 hectares of marked runs and a snow park, all located between altitudes of 3,200 metres and 3,600 metres.

It now has the earliest start to the French summer ski season, reopening less than a month after closing for winter, opening from Saturday 28 May to August 15th from 8am to 12.30pm every day. 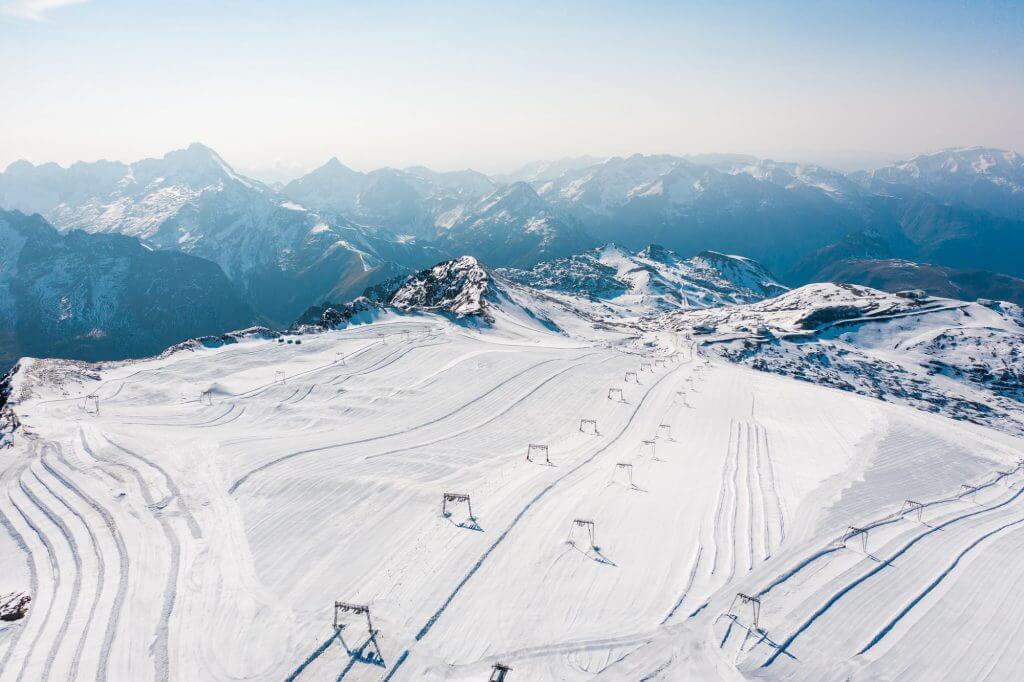 Until Les 2 Alpes moved the start of its summer ski season forward by a month, The Pisaillas glacier above Val d’Isere was traditionally the first to re-open after the winter season end at the start of May, It also has the smallest summer area and the shortest summer season – this year four weeks from June 11 to July 10th. The Cascade chair and Montet drag lift are open to the public from 7:30 am to noon daily with three runs (Moraine, Pisaillas and Montet) open to the public and another three (Champions, Aiguille Pers and Roche) reserved for ski team training.

Tignes (pictured top) will offer skiing and boarding on their Grand Motte glacier from 18th June to 31st July.  The recently upgraded cable car above the glacier is one of just a few in the world offering a ‘balcony’ on the roof of the cabin for people wishing to ascend above 3,000 metres in the open air. Tignes has numerous summer activities on offer besides snow sports and after the glacier closes to skiers and boarders will remain open until September 4th.

Summer glacier snow sports are dependent on weather conditions. Snow cover wasn’t looking great at the end of March but April has seen more than a metre of snowfall on most Alpine glaciers so hopefully they’ll make it through the summer heat without the sun melting the cover from the glacial ice – as has increasingly been happening in recent years due to the climate emergency.