The summer glacier ski areas at Les 2 Alpes and Val d’Isere in France and Crans Montana and Zermatt (pictured above) in Switzerland have reopened, as has the Molltal glacier in Austria (where three other glaciers already opened last week).  With two resorts also open in Norway it means the number of open areas in Europe is back to double figures.

Ski areas are primarily open to local skiers but with borders opening across Europe in recent days and in coming weeks it looks like skiers from neighbouring countries will potentially be able to get on the slopes.

All are reporting great conditions with snow building up during a cold May. A spokesperson for Val d’Isere said the snow there was “sensational” whilst Les 2 Alpes say the snow depth is 50cm more than a year ago. More snowfall is forecast at some glacier areas this weekend too.

As with so many things, operations will be a little different though:

“All the shops, bars, restaurants and hotels are reopening, following the new rules given by the French government.  Restaurants are allowed to extend their terraces. There must be 1.50 metre between each table, on the terraces as well as inside. Many restaurants are also offering takeaways and delivery services,” said a Les 2 Alpes spokesperson, adding “Hotels must keep rooms empty for around 24 hours between each client for a big clean. Breakfast can be served in the rooms or in the hotel restaurants, as long as there is a space of 1.50m between each table.”

The resort has initially only opened its ski slopes to ski team racers until 27th June then to everybody else after that.

“This will allow the resort and lift company to test their new way of working. The glacier is accessible from the resort by a cable-car, the Jandry Express. It can fit up to 20 persons in each cabin but with the new measures, only eight people will be able to get on. Chairlifts will also have to keep empty seats – for example, only two people will be allowed on a quad chairlift.  It is compulsory to wear a mask in cable-cars as well as on all the lifts.”

Val d’Isère has opened six groomed pistes on the Pisaillas glacier above the outlying hamlet of Le Fornet. Three of the runs from 3300m down to 2725m will be reserved for French national teams and ski clubs in training. The remaining three will be open to the public.

Val d’Isère (pictured below in summer) has had to tackle two major problems in re-opening the ski area. Firstly, snow clearance teams have had to work night and day to clear exceptionally large amounts of snow off the road leading up to the Col de L’Iseran, the highest paved mountain pass in Europe. The summer ski area is located at the top and skiers need to drive to the foot of the access chair-lift. 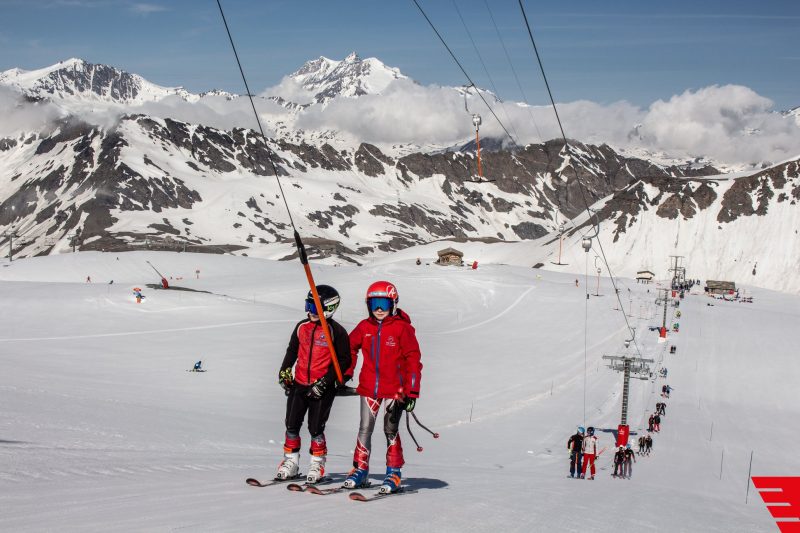 Secondly, the resort has been working closely with the French Ski Federation to devise a way in which necessary health precautions can be put in place to ensure the safety of all skiers. To ensure social distancing, numbers allowed on the glacier will be strictly limited to 500 a day during the first week and then increased to 600. Online reservations are required, allowing for arrivals and departures to be staggered in order to avoid any overcrowding. Anti-bacterial gel will be available at the lift stations.

The glaciers will initially attract skiers based locally but borders within the EU have already started re-opening with all likely to have re-opened by the end of June. The UK government advise against all non-essential travel and are imposing two weeks quarantine on everyone coming in to the country. A number of countries in Europe are also keeping their borders to the UK closed.

Other glaciers expected to open later this month include Tignes in France as well as Passo Stelvio (on the 13th) and Cervinia (on the 20th) in Italy – the first resorts to re-open there for more than three months.  Saas Fee will begin is nine-month ski season to spring 2021 until next month.