Fancy A Little Carnival With Your Skiing?

Getting grabbed under the pelts of a fury monster shattered any plans for a tranquil lunch on the piste, but this is Evolène, this is carnival – and the unexpected is queen.

My fury friend was a Peluche, a strange, mysterious creature linking the current carnival right back to pagan times.

Having my head under his untanned chamois, sheep, goat and fox fur wasn’t exactly a breath of fresh mountain air, but it was the face of this wooden masked ‘monster’ that made me really sense the menace these creatures represent.

The masks, made of Swiss pine, are sculpted by local craftsman Hugo Beytrison, and the fear raising Peluche roam the slopes and town clanking large cow bells and causing you to creep… 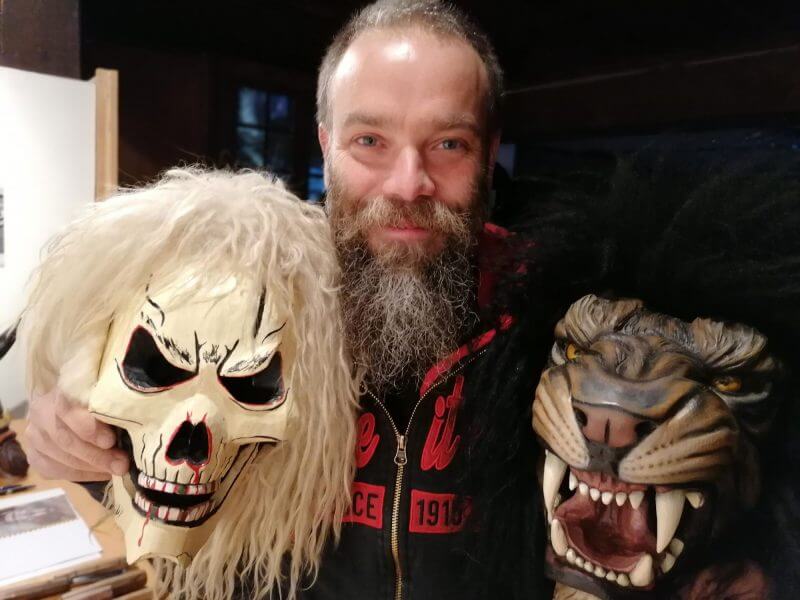 Carnival sees Evolène haunted by these ancient creatures, who prowl around the town. On Carnival Sunday they’re also joined by the empaillés (scarecrows) who form part of the bedazzling village parade.

The role falls mostly to the local young men, as an Empaillé can pack in around 30 kilos of straw, making it very hard to move!

This incredible effort is part of the village’s commitment to its history. The

Peluches and Empaillés come from Pagan rites, to frighten away the bad winter spirits and to welcome the spring.

On Carnival Tuesday, the entire village gets together for the final ritual – to burn old man winter (the poutratse) on a bonfire.

The history of carnival goes so far back so far some of its originals are forgotten, but

it’s a colourful cocktail of Celtic roots, sipped by mountain people who truly value their culture. 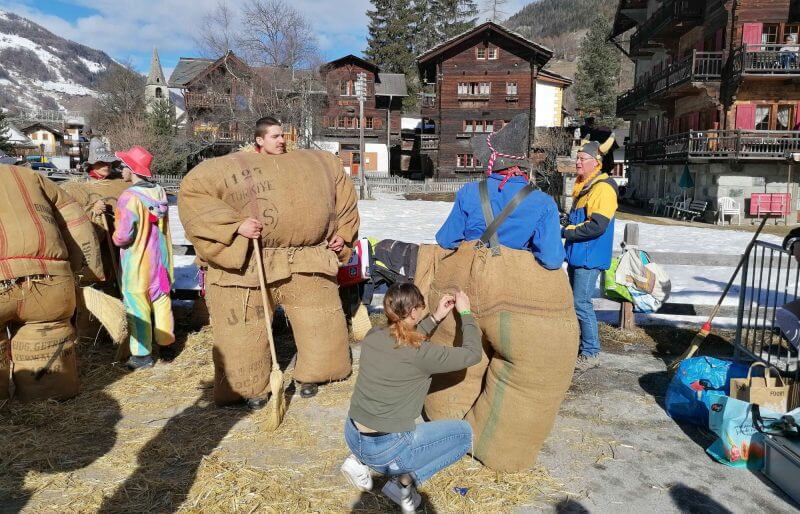 We danced with unicorns and smurfs, saw crazy wigged kids, listened to folk music, heard prog rock in an igloo …and stayed with a farmer –  dressed as Freddie Mercury.

The masks, music and madness mix the darkness of stories like Grimms Fairy Tales with Mardi Gras and Guggenmusik.

I’d not seen a Guggen band before – the term means music to look at – and was impressed with the Le Frénégonde’s theatrical steam-punk style costumes and choreography.

Coming to ski here at carnival is definitely an opportunity to mix time on the pistes with a big dip into mountain village life.

My monster (Peluches) moment was in the ski resort at Evolène – and they were everywhere – in the Remointze restaurant, on the piste and at the bar!

We’d pretty much explored the resort’s pistes that morning, using the one chair lift to get us up on to the slopes. From here it’s T-bar lifts, which proved a challenge for a few of us, especially our boarder friend.

The 42kms of slopes are wide and cruisy, but at the time of our visit the lack of snow at the bottom of the resort made it challenging for an early skier as there was only one blue run.

The sweeping red and black from the top (2,680m) give great views of the Valais Alps, pushing their jagged sheet white peaks upwards to contrast the piercing blue sky and down into the beauty of the forests.

Evolène is ideal for fit folk, confident intermediates and advanced skiers who don’t mind drag lifts or depend on 21st century trimmings such as heated chairs. 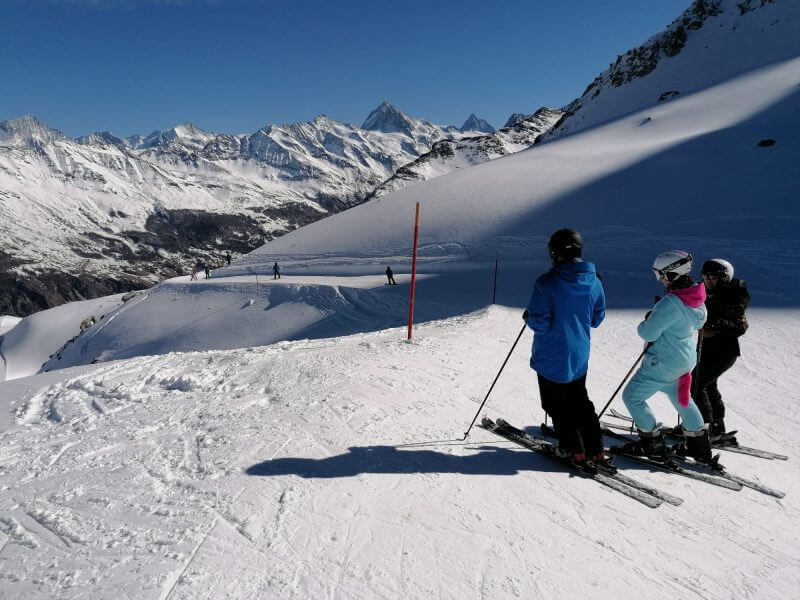 On Carnival Sunday we also skied remote Arolla (3,000m), a challenging 30-minute drive from Evolène, along a narrow, snaking road up from Les Haudres.

All the carnival antics left me craving some quiet and I certainly found it. Arolla is the end of the road, situated on the famous Valaisan ‘Haute-Route’ from Chamonix to Zermatt.

Perhaps being flanked by famous neighbours such as Verbier and Zermatt allows this resort to be free from overcrowding, or perhaps it’s the punishingly long pommel lifts – you have to take two long rides to get the top.

But – being a huge fan of windswept Cairngorm – I felt very at home in this ‘80s feel’ resort with its quirky mountain restaurants and views a plenty.

You can see the Matterhorn and Dent Blanche and the resort’s height also ensures its 47kms of pistes are snow sure. There’s also beckoning off-piste (if avalanches allow).

But a word of warning, anyone relying on the local piste maps should be wary as the blues seemed more like reds to my friend and I, which after the long drag lifts, made it a good work out going up and down!

Many mountain villages have changed to become large ski resorts, but I liked the feel of Arolla and Evolène. These Valais canton villages have retailed their charm, their local Romand language, and their work hard, play hard approach.

Where else can you stay with the farmer, who’s also the carpenter, the environmentalist and the festive Freddie Mercury? 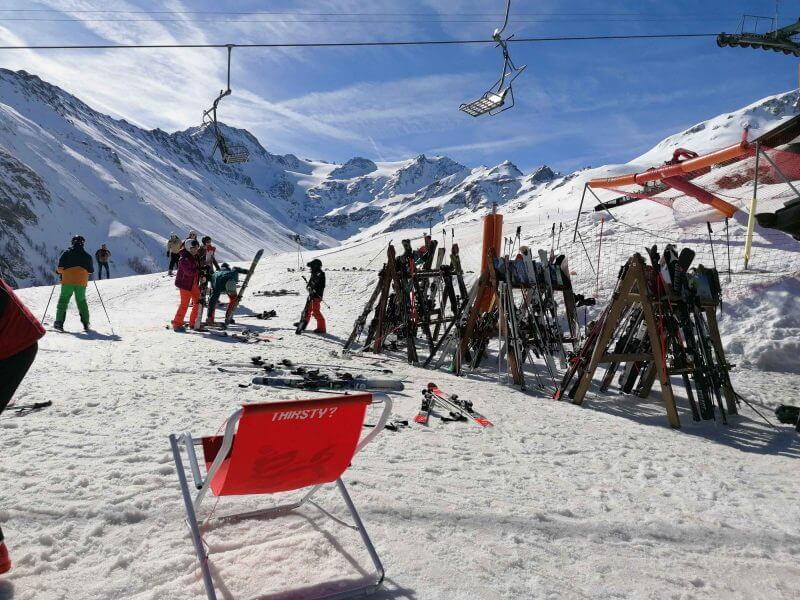 Swiss Travel Pass gives you unlimited access to Swiss travel network on trains, buses and boats. It’s sold for 3, 4, 8 and 15 days. It also allows a free entrance to over 500 museums and exhibitions and 50% discount on mountain excursions.  The nearest airport is at Geneva/Sion and the nearest train station to Evolene is at Sion.

Is This The Perfect Ski Day?