Forecasters expect around a foot of snow to land by the end of today in Colorado ski areas, making the start of North America’s season seem a possibility in the next 24 hours.

“I am not exactly sure when, but we are going to open very soon,” the boss of Arapahoe Basin ski area in Colorado, one of several resorts in the famous ski state that have been making snow over the past few weeks and already laid down the base for key runs before a big snowstorm began to hit the area late yesterday.

The snow has already brought similar accumulation to slopes further north and west in Washington state, Alaska, parts of BC and Oregon.  In some cases this is the second big autumn snowfall in the past fortnight. 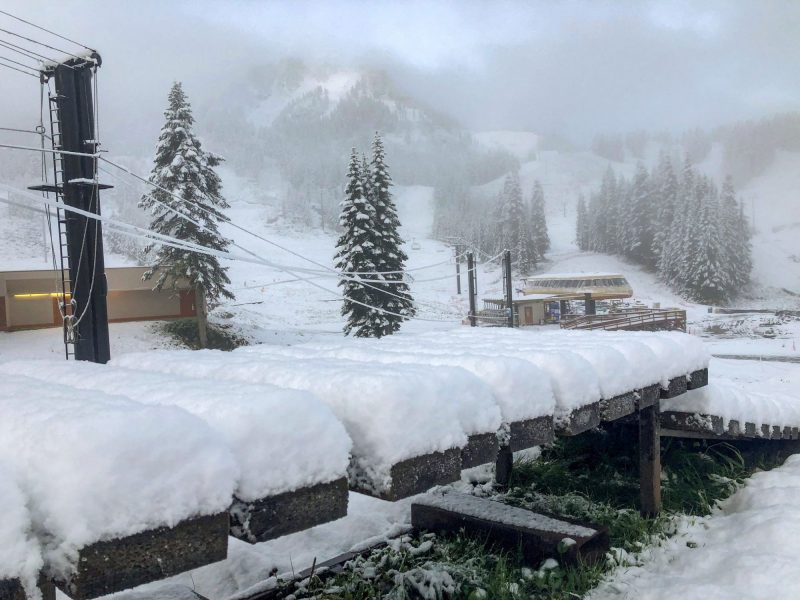 Besides Arapahoe Basin (pictured below last night), at least two more Colorado areas, which are among the 20 highest altitude areas in the world, have also laid down bases. Loveland and Keystone (pictured above in the past 12 hours) both look ready to open with the latter having trailed its plan to be one of the first to open all year following owners Vail’s investment in new snowmaking and a desire to give its Epic season pass holders a long season for their money, starting early.

An opening in the next day or two would be one of the earliest in recent years. Last year Wolf Creek, another Colorado area, surprised many by opening first last year on October 13th, after another big snowstorm.

Snowmaking has also got underway in Vermont, Maine and Quebec in the east where ski areas have in the past been the first to open in the country in years when they’ve had colder October weather  than the west.