InTheSnow’s Henry Druce takes his kids along to an avalanche transceiver training session in Wimbledon. It might be a few years before they venture off-piste, but is it worth getting children started earlier on? Henry and his kids find out…

Over many years I’ve received a lot of avalanche training whether as a precursor to going off piste skiing with a guide or on a cat or heli skiing trip – yes, I’ve been very fortunate.

A few years ago I attended a Henry’s Avalanche Talk (HAT) course on Wimbledon Common and was mightily impressed with the quality of the instruction and the practical exercises we did. Why were there only adults on the course I thought? Children could benefit from this too.

So I decided to sign up my two kids, Zoe 11 and Holly 8, to the course taking place a couple of weeks ago.

It was a gloriously sunny Autumn day, at least at the start, as trainer for the day and HAT partner Chris Radford introduced himself to my kids and the other course attendees near the very un-Alpine sounding Windmill Tea Rooms.

At first there was quite a lot of talking from Chris as he handed out avalanche transceivers and explained how they worked. He said the signal only transmits up to around 40m, so you must first get in range. Then once you pick up the signal you don’t just follow the directional arrow on the transmitter as you might logically think. Because sound waves are created in arcs you need to tease out the buried transceiver location by trial and error, walking in zig zags and constantly adjusting your direction of travel depending on the strength of the signal. 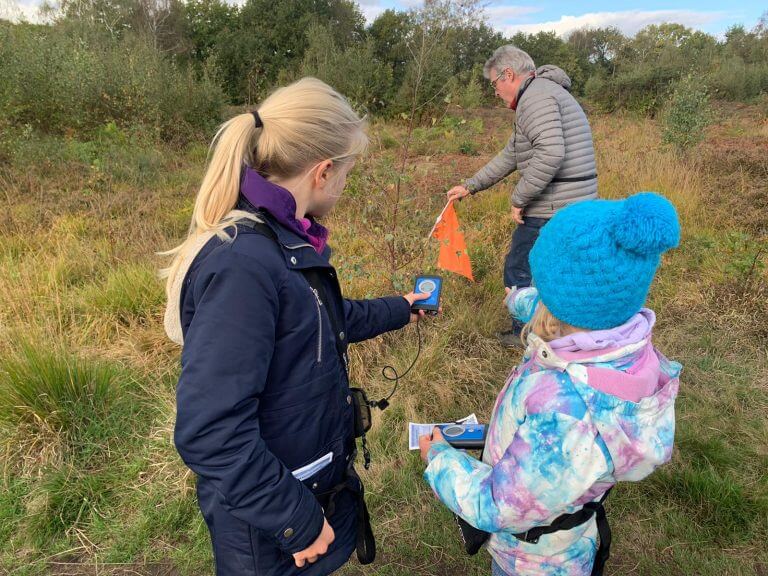 I thought the presentation part might be too challenging for the attention span of my kids. Far from it – they were engaged throughout and asked lots of intelligent questions, according to Chris.

After the half-hour talk, the fun really began.

Before we arrived, Chris had hidden transmitters in five areas of Wimbledon’s bushy undergrowth to the left and right of a path leading from the cafe – the 60m x 100m areas, replicating what you’d experience in a full-scale search, was marked by a flag indicating the ‘avalanche’.

Like a sophisticated treasure hunt,  Zoe and Holly had to use the skills they’d learnt to find the hidden transmitters.

For each one they spread out in the flag marked designated  areas, walking in the direction of the ‘avalanche’ until one of their transceivers started beeping. Whoever first came into range would then bellow “signal”.  They then quickly walked through the Wimbledon Common undergrowth, trying to make the distance readings on their transceivers reduce as they got ever closer to the hidden treasure (transceiver). They shouted out the numbers as they searched, “30, 27, 20” . You get the picture.

When the readings dropped to five metres they put their transceivers much closer to the ground, moving them  to the left and right, up and down to find where the signal is strongest. The closer you are, the lower the metre reading and louder the beeping noise until it blends into one continuous sound – like a heart monitor flatlining.

It appealed to their intensely competitive nature to be the first to find the transceiver and then hold it aloft, shouting “found”.

Chris explained that in a real-life situation once the avalanche transceiver readings were close to zero you could then unfurl your probe – essentially a 3m long collapsible stick that you use systemically to prod into snow to locate the sender of the signal. Once located, you use the third item everyone going off piste should carry, a shovel, in order to dig them out.

Obviously on Wimbledon Common it was impossible to simulate victims buried in snow and so Chris could only cover the digging and probing in principle –  you insert the probe into the snow in the small target area you’ve defined by your avalanche transceiver and when the victim is struck you start digging urgently. But simulating the search process could be done very effectively.

At first it  took around four to six minutes to find the transceivers and then each time Zoe and Holly became a little bit quicker, a little more efficient.

As Chris says, “Practice, practice and practice. It’s the best way to improve.” As this course brilliantly proves, it’s something you can do far away from the slopes, even better it’s a great, fun activity you can do with your kids.

Zoe: How long do you have to survive  an avalanche?
Chris: You have 15 minutes before you run out of oxygen.

Holly:  What chance do you have of surviving an avalanche?
Chris: Some 90 per cent of people are still alive after they were caught by an avalanche and then they have 15 minutes before they have to be dug out.

Zoe: What’s the best thing to do if caught in an avalanche?
Chris: If you can, put your hands in front of your face and try to create an air pocket around your mouth because that will help you survive longer

Holly: What causes an avalanche?
Chris: Most of the time it’s skiers who trigger avalanches.

Zoe: How many people die in avalanches each year?
Chris: In Europe we think it’s around 100 per year. Sometimes it’s a bit more, sometimes a bit less.

Holly: If there is one takeaway tip what would it be?
Chris: Find a way to practice. People who practice are much more successful.

The three hour courses start at 11.30am  and cost £65 per person. Further details from henrysavalanchetalk.com