Amazon has been keen on drones for some years now, wanting to use them to make deliveries, but a new patented drone that can pull a skier up a ski slope is a whole new dimension.

According to the patent, the drone (dragging a tow rope, pulling a skier) can pull the skier up the slope, removing the need for a traditional fixed cable lift, or walking. According to the patent the technology could be programmed to avoid potentially dangerous terrain and obstacles like trees or boulders, and lift skiers into the air if necessary.  The drones could also tow water skiers. 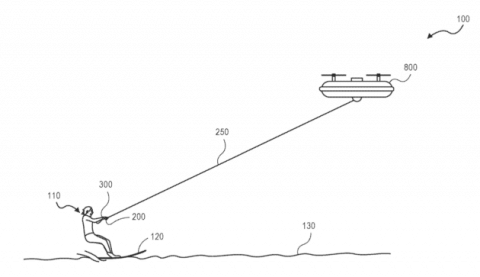 The idea of drones being used to pull skiers and snowboarders over snow and indeed into the air isn’t entirely new, Santa famously tried it with some success in 2016.

However the issue that most attempts have faced, and which the Amazon parent seeks to overcome, is one of how do you control your drone and hang on to the tow rope at the same time.  Santa’s drone was being steered by someone else (and it wasn’t Rudolf).

“Current hand-operated remote controls for automated aerial vehicles are not conducive to users being able to operate the remote controls while simultaneously utilizing their hands for other purposes,” the patent application filing states.

Amazon, run by the world’s richest man, have been working on their drones since at least 2013, but have not yet been able to launch a commercial drone delivery service. The model they most recently unveiled, a little over a year ago, was fully-electric and able to 15 miles, delivering packages weighing under five pounds in less than 30 minutes.  The application for the skier-towing-drone was originally made in 2016.

Ski resorts have a love-hate relationship with drones. The technology has been used to make incredible film of resorts and athletes and have been used by rescuer services to located skiers in difficulty in remote locations.  However most resorts ban drones ‘for leisure use’ due largely to the perceived danger of a drone hitting a lift or a skier.

So it seems unlikely the skier-towing-drone concept could be used at a regular ski area unless under certain circumstances or in a regulated area away from other skiers and lifts.

Having your own personal ski lift would seem to work well with the current need for social isolation however.