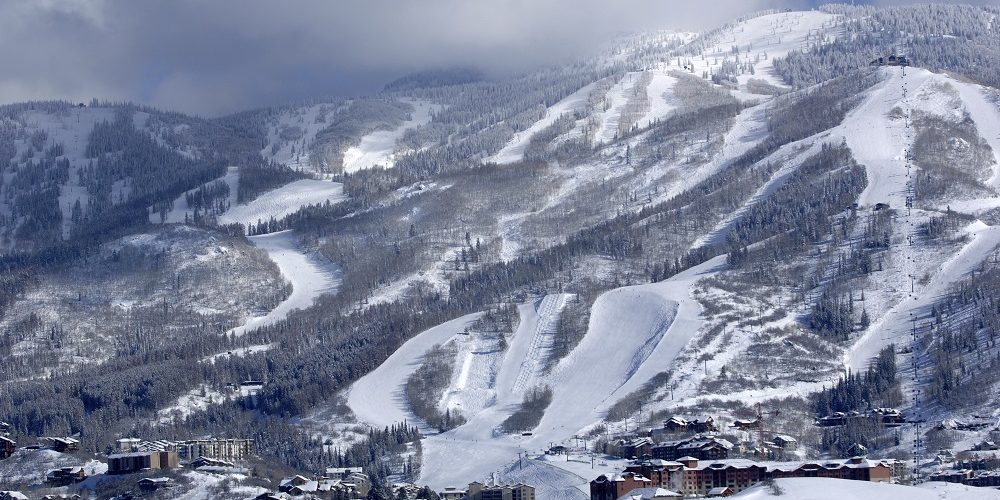 What’s New In Steamboat For Next Winter

Steamboat is finishing work on the longest mountain coaster in North America with an uphill ride of 2800 ft and a downhill track with twists and turns equalling more than 3600 ft for a total ride of more than 6000 linear ft. The track departs from the base area in Gondola Square, riding up the hill towards the top of Christie Peak Express before descending back to the base area. Winter is the best time to experience this year round attraction. Watch skiers swoosh below you and take in the best views in the valley on your ride.

Ski with an Olympian

Having produced more winter Olympians than any other town in the US, it’s nearly impossible to have a holiday in Steamboat without running into these elite athletes. One great way is with free skiing clinics. Join Olympic medallist Billy Kidd for a free instructional run down Heavenly Daze on select days throughout the season. Check the Billy Kidd sign to see if he is skiing that day. If you want to learn more advanced ski skills, join Olympian Nelson Carmichael for tips on how to navigate moguls during his free clinics on various Sundays throughout the season. 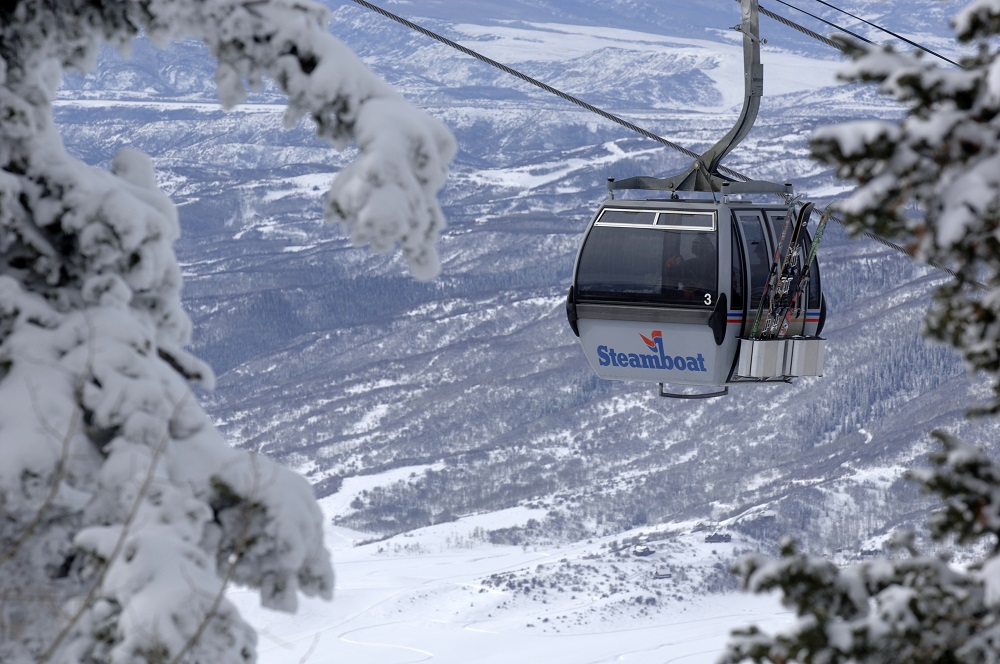 Luxury highlights: One Steamboat Place and Moving Mountains. Moving Mountains is owned by an English man and is based on the European chalet style lodging.  Properties range from three- bedroom apartments to family homes with 7+ bedrooms and added amenities for multi-generational or large friend group travel. Catered experiences include a private chef creating menus designed specifically for the group.

Colorado is known for its craft beer scene and with the opening of the latest, The Mountain Tap Brewery, Steamboat now has four local breweries catering for every taste. In addition to the brew houses where you can sample their beers, there is the BARley, a bar that focuses on serving only Colorado beers and spirits from all over the state.

Cloverdale (opened July 2017) and focuses on the farm-to-table experience. The Cloverdale farm is located just outside city limits and the restaurant is serving 5 and 10+ course meals using the freshest ingredients in the valley. 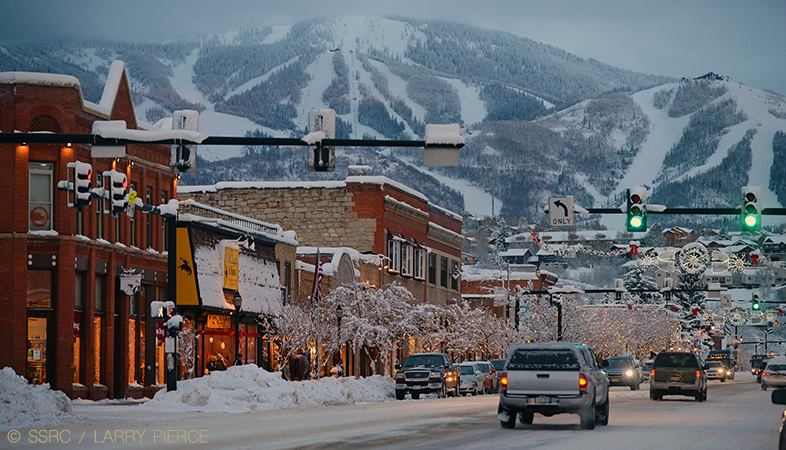 There are some excellent chefs in Steamboat, trained by the best of the best and now living in Steamboat for the lifestyle.  One example is Kate Rench from Café Diva. She graduated from the French Culinary Institute in NYC and began her career under Jean-Georges Vongerichten.  After working in various high-end restaurants on the east coast, the mountains called her and she moved to Steamboat to split her time creating unique culinary experiences and enjoying the outdoors with biking, skiing and more.

With a base area at 6500ft and the mountain lodges from 9000ft upwards, chefs have to overcome the hurdles of cooking at high altitude.  It throws all the regular rules of baking and cooking out of the window. Especially baking.  You have to adjust time, ingredients etc to make sure things don’t under or over cook.

Weather Summit is an annual gathering of the best broadcast meteorologists in the US and Canada who learn the latest technology and industry trends while also broadcasting back to their viewers with interesting weather based stories live from Steamboat.

Legend has it that the term Champagne Powder® was first used in the early fifties by a local rancher to describe the region’s light, dry Rocky Mountain snow. Whilst out skiing one day, on terrain that eventually would become the Steamboat ski area, he said the snow tickled his nose like champagne. 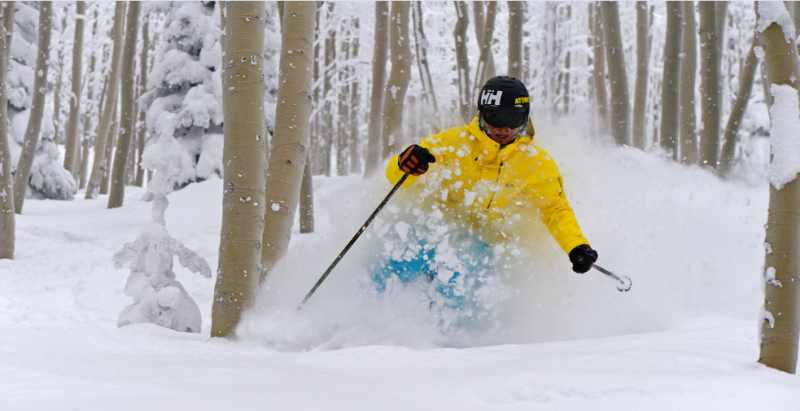 Steamboat is the only ski resort in the world that has its snow trademarked and so there’s no other place you’ll find real Champagne Powder® Snow!

It’s the low water content of the snow that makes Champagne Powder® Snow so special, Steamboat gets snow with the lowest water content in the United States, an average of 6% density, compared with 15% for most other locations. Twenty five cms of melted snow produces one and a half cms of water, compared with a more usual four cms.

The only gathering of its kind where professional cowboys and cowgirls (many who have never been on skis in their life) take to the slopes of Steamboat to compete in friendly games and be named the best of the best.  Crowds love watching the competitors navigate jumps, race gates, roping and saddling a live horse, and the fan favourite is the every-man-for-himself stampede. 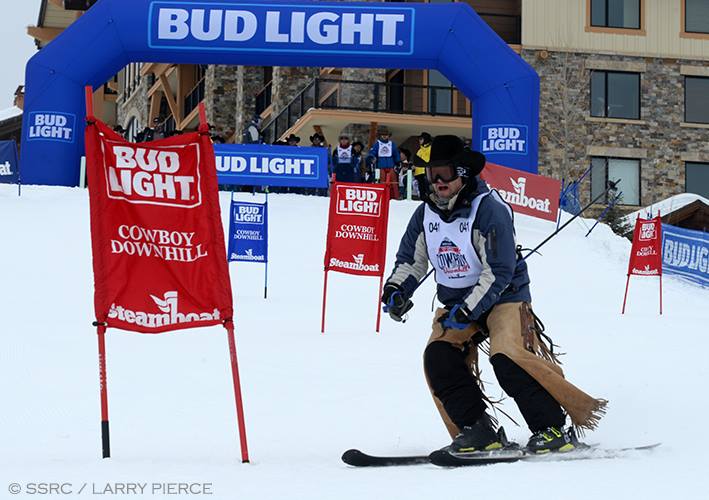 One of the oldest, continuously operated ski resorts in North America, Howelsen Hill is home to the Steamboat Springs Winter Sports Club, which has helped Steamboat produce more winter Olympians than any other town in the US: 89 and counting, with more expected to join the ranks at the 2018 Olympics.

Howelsen Hill is also home to the competition jumps which help Steamboat train the next generation of Nordic Combined athletes, one of the most popular sports for Steamboat youth to compete in.

Howelsen Hill is named after Carl Howelsen who helped introduce skiing as a sport (not just a mode of transportation in the early 1900’s and was the mastermind behind the Winter Carnival. Now celebrating its 108th year, the Winter Carnival is a family themed event celebrating all things snow highlighted by the street events where Main Street is closed, filled with snow and events such as kids ski joring take place, followed by the only skiing marching band in the US. The biggest Winter Carnival event is the night extravaganza which includes the infamous Lighted Man shooings fireworks from his ski poles as he descends the mountain, ski patrollers jump through a flaming hoop and one of the best fireworks displays in the country closes out the night.