It’s also very easy to reach from the UK with a short flight to the compact airport at Innsbruck. Choosing which ski area to visit first is perhaps the trickiest part of booking your holiday, so here we introduce some locals in some of Tirol’s top resorts with their insider tips to pass on.

Innsbruck – The best Kiachl in Tirol

The Capital of the Austrian Tirol is an amazing place to base yourself for a ski and city break. As well as all the amenities you’d expect in a small city, the architecture is magnificent and the setting, surrounded by Alpine peaks, is spectacular. A local lift pass covers no less than 13 ski areas surrounding the city, some only 20 minutes from the city centre, as well as public transport and other attractions around the city. 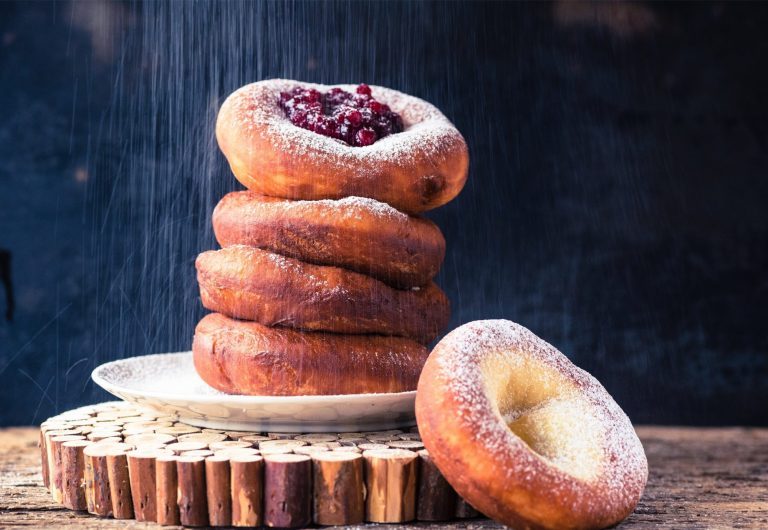 Helga Dengg‘s family were the first to sell Kiachl (an Austrian cross between a croissant, a Yorkshire pudding and a donut) at the Christmas market, and they’re still selling them 46 years later. She and her partner Reinhold run the restaurant Dengg Pause in the old town area.

“When I visited my grandma’s she would always cook Kiachl with runner beans followed by fruit compote. At the first Christmas Market, not many people bought our Kiachl as many still made it at home, but as the years went by, ever more people came to our stand, as today eating a Kiachl invokes memories of childhood.”

St. Johann in Tirol -The sommelier on the slopes 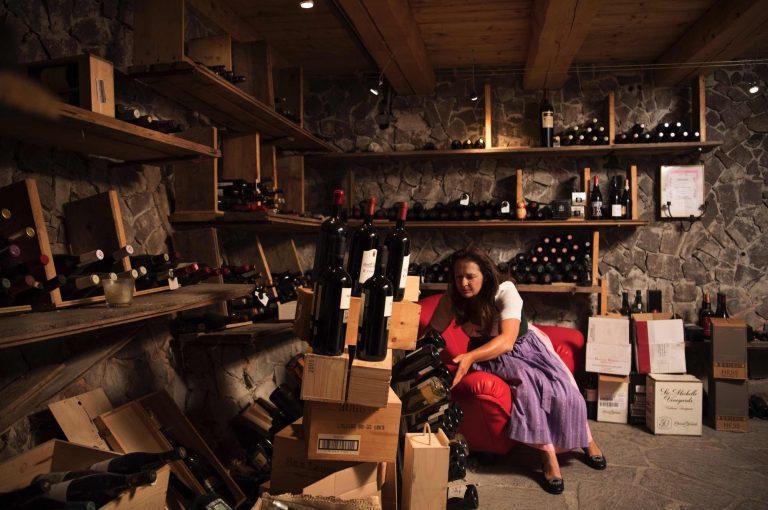 If you’re looking for a place to take your family where you can all experience a real winter like “back in the day”, St. Johann is famous for its friendly ski area, first-class ski schools and great selection of family hotels you can walk from to the slopes.

Annemarie Foidl runs the Angerer Alm hut on the Kitzbühel Horn mountain with her daughter and son-in-law. The restaurant, by the Harschbichlbahn cable car, is simple to reach and also offers ski-in/ ski-out accommodation. The fabulous menu uses locally sourced seasonal ingredients, but the restaurant is most famous for its wine list.

Since 2008 Annemarie has been president of the Sommelier Union Austria. “In 1989 I started developing my first wine list. It went down really well with the guests. The wines are often in better condition thanks to the temperature, humidity and air pressure in the mountains. Years ago, I told people that they should walk up to the hut at night because it is so beautiful. The snow crystals sparkle in the moonlight – it’s amazing. Now we have our own skidoo, so I don’t need to walk anymore, but I still like to when I can.” 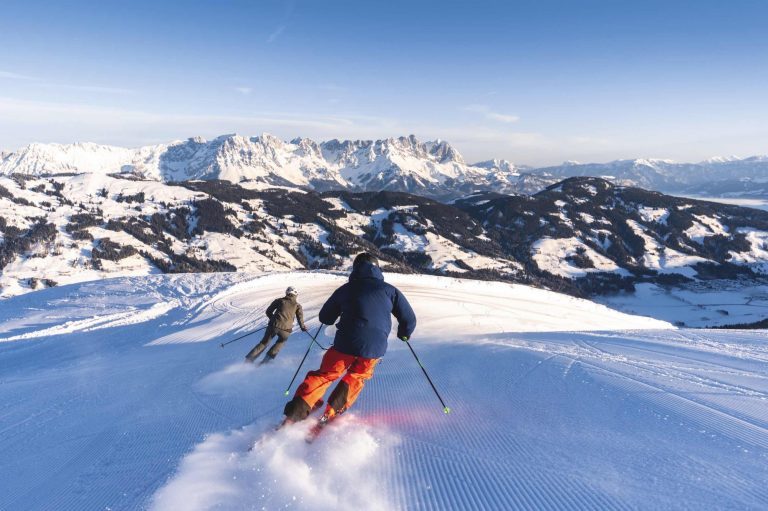 One of the largest, most modern and sustainable ski regions in Austria, SkiWelt Wilder Kaiser – Brixental includes 70 peaks over 3,000m and hundreds of wide slopes. Fortunately the region has 80 cosy huts and restaurants waiting for you whenever you need a break.

SkiWelt local Janine Gugglberger says, “People often ask me, ‛Why the SKiWelt area?’ and I just say: ‛You don’t have this variety of pistes anywhere else’”.

The KitzSkiWelt Tour connects the SkiWelt Wilder Kaiser – Brixental with the KitzSki ski area. Never go on the same lift twice on this 88km-long tour and be challenged by slopes of all skill levels. From Going it goes on perfectly groomed slopes across the Kitzbühel Alps to Hollersbach and back. Of course, the circular tour can also be started from any SkiWelt location. 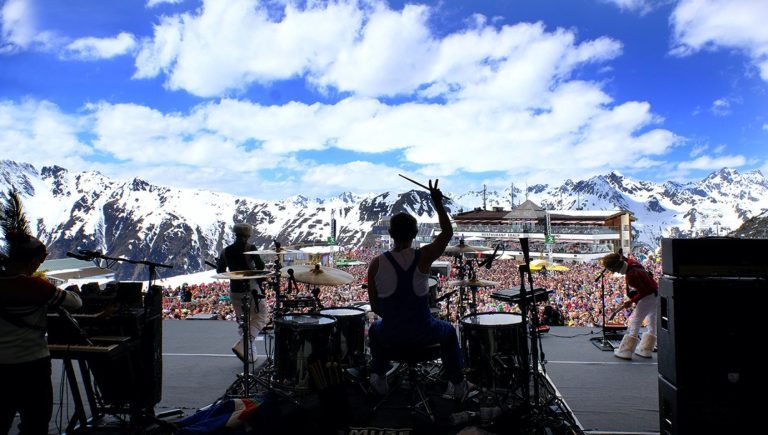 Ischgl is the perfect place for active travellers as well as those looking for a more leisurely holiday. One of Austria’s largest ski areas, it has snow-sure slopes from late November to early May, and more 4★ and 5★ hotels and highly rated restaurants than any other.

Dominik Walser, a film and TV producer, interviews the stars performing at Ischgl’s Top of the Mountain concerts which start and close the winter season each year, with big stars like Robbie Williams, Elton John, Katy Perry, Pink and Kylie performing.

“Mariah Carey was really cool. Before the concert everybody was saying how difficult she is, but she was actually really nice and self-deprecating. I am never nervous when I meet the performers. I see it this way: they do their job, I do mine. Maybe I earn a bit less than they do – in fact, a lot less – but I always try to talk to everyone as equals.”

Award-winning cuisine in a spectacular location, the Ski Juwel Alpbachtal Wildschönau was created only a decade ago when the two historic ski areas were linked. Located less than an hour from Innsbruck, it has retained all the original, down-to earth charm we love. 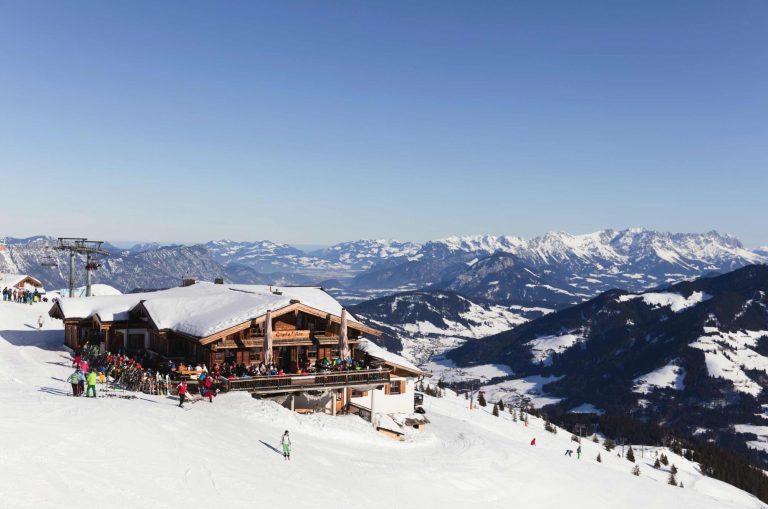 Stefan and Daniela Thaler own the GipföHit hut, located 1,900m up by the mighty cross atop the Schatzberg mountain. There are majestic views of the Zillertal Alps, the Wilder Kaiser Mountains and the Kitzbühel Alps … as well as fabulous food from their own farm.

“You never have enough of the mountains. Every time the sun shines onto the slopes I think, ‘Wow, that looks amazing.’ I always dreamt of being my own boss, and everything has gone so well we’ve agreed to carry on for ten more years. Up here, we are in charge.”

St. Anton am Arlberg – Some of the world’s best skiing

Skiing has been part of everyday life in the Arlberg, often dubbed the “cradle of alpine skiing”, for more than 100 years. The region is home to world-famous St. Anton, high-altitude St. Christoph as well as Stuben, stylish Zürs and the gourmet’s delight of Lech, and together they form one of Austria’s biggest ski regions, famed for its fabulous freeriding too. 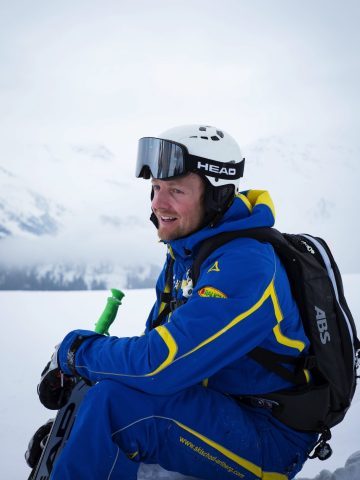 Patrick Bätz is a fully qualified off-piste guide with the Skischule Arlberg. “The Valluga peak, the highest in our resort, is pretty tough – not everyone can ski down there. You need a head for heights and, in order to even ride the gondola to the top, you have to be accompanied by a qualified guide. If you grow up being outdoors a lot as I did, then it is something you need in life, including in your job. I couldn’t imagine working in an office. Even on my days off I like to go skiing.”

Home to Austria’s highest craft beer brewery With its many traditional, family-run hotels and inns, a ski holiday in Zillertal feels a bit like visiting old friends. Perhaps this is also due to the region’s snow reliability, lack of lift queues and relaxed atmosphere, plus there’s always a cosy hut nearby. 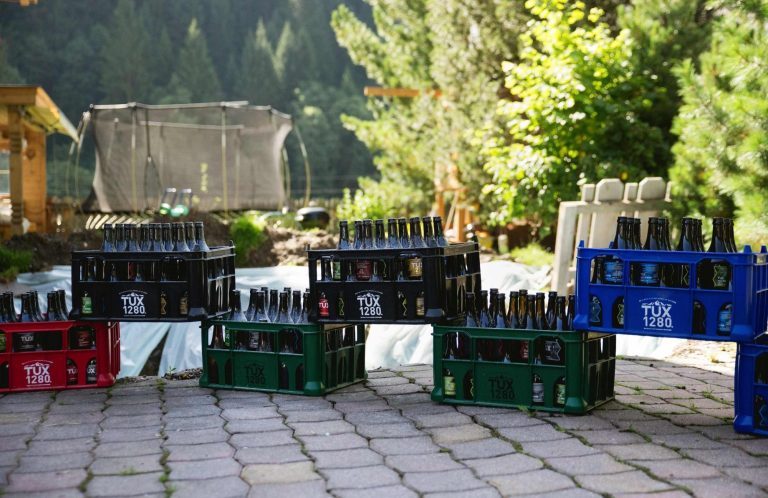 “I asked Sally to marry me in the Eggalm hut. I thought, ‘If she says no then at least I will have a good ski back down.’ She just said, ‘Why not?’ Eighteen months later, I heard there was a house for sale in Tux, opposite the ski lift. The day before the auction, my son was born in England. I drove straight from the hospital to the airport and won the auction in Tux. After spending winter here, we never went back. Later a friend was making good homebrew beer, and we ended up making beer properly, now making five varieties.”