As another season draws to a close, another British Championships has seen the best of British snow sports talents take to the slopes, with the level of competition this year higher than ever. The BRITS 2019 was a true representation of how far British freestyle skiing and snowboarding has come and how bright the future looks for our young athletes.

The BRIS 2019 kicked off in style, with Ski Big Air and Snowboardcross showcasing the best of all age groups, from teens to parents and the odd Olympian.

In the Big Air, viewers were left stunned by some epic tricks. Talented youngster Kirsty Muir threw down a switch misty 900 in qualifying to demonstrate why she’s seen as one of GB’s most exciting young prospects. However, despite being the only woman hitting the biggest kicker, her 360 lost out to Amy Clayton’s much cleaner and grabbed full rotation over the smaller kicker. Kirsty picked up the silver and Lara Shaw the bronze.

Number one seed Tom Greenway took the win with a switch double 1260, Jasper Klein earned a silver with his 1260 Japan (after taking on an enormous double backflip!) and Harris Booth claimed bronze. Second-place qualifier Justin Taylor-Tipton took an unfortunate fall that ruled him out of the rest of the contest, but we’re sure he will be back to take up the challenge next year.

We're out at the The BRITS in Laax this week, where Britain's best are competing to be crowned British Champions across Big Air, Ski/Snowboardcross, Slopestyle and Halfpipe! Take a look at what happened today ⬇️

Ski cross and Snowboard Big Air saw some impressive talent demonstrate what they can do even in the most blustery of conditions. As a storm moved in, snowboarders took to the skies at the LAAX snowpark. Spectators witnessed an epic battle between Matt McCormick and Billy Cockrell that saw the latter pip McCormick to the podium by just one point, with Fraser Jamieson taking third place.

12-year-old Mia Brookes retained her title as ladies British Champion for the second year running, with a huge backside 720, while boardercross champ Maisie Hill and 2018 slopestyle champ Cerys Allen completed the podium. What will Brookes do with her prize money? “Buy a car, a mark 1 VW Caddy! And I’m gonna fill the back with Star Wars Lego…”

One of the things we love about the BRITS is the family atmosphere, with parents and children often competing side by side. Indeed, this Big Air was one to remember for the Leigh family, with Ed Leigh claiming the masters crown with an enormous laid out backflip over the sizeable medium kicker. Wins for wife Sian and daughter Suki in the women’s masters and under 16s respectively, and a silver for son Oscar demonstrate what the BRITS is all about. Having fun and enjoying the mountain with those you love!

As conditions closed in, the ski cross titles were determined by qualifying times alone, with British Junior World Championships representative Nicholas Bingham claiming victory ahead of Tommy Dade and Patrick Young (57.55). 13-year-old Octavia Steiger took gold in the women’s competition, with just over a second’s advantage over second placed Emily Keen and with bronze going to Imogen Smith. 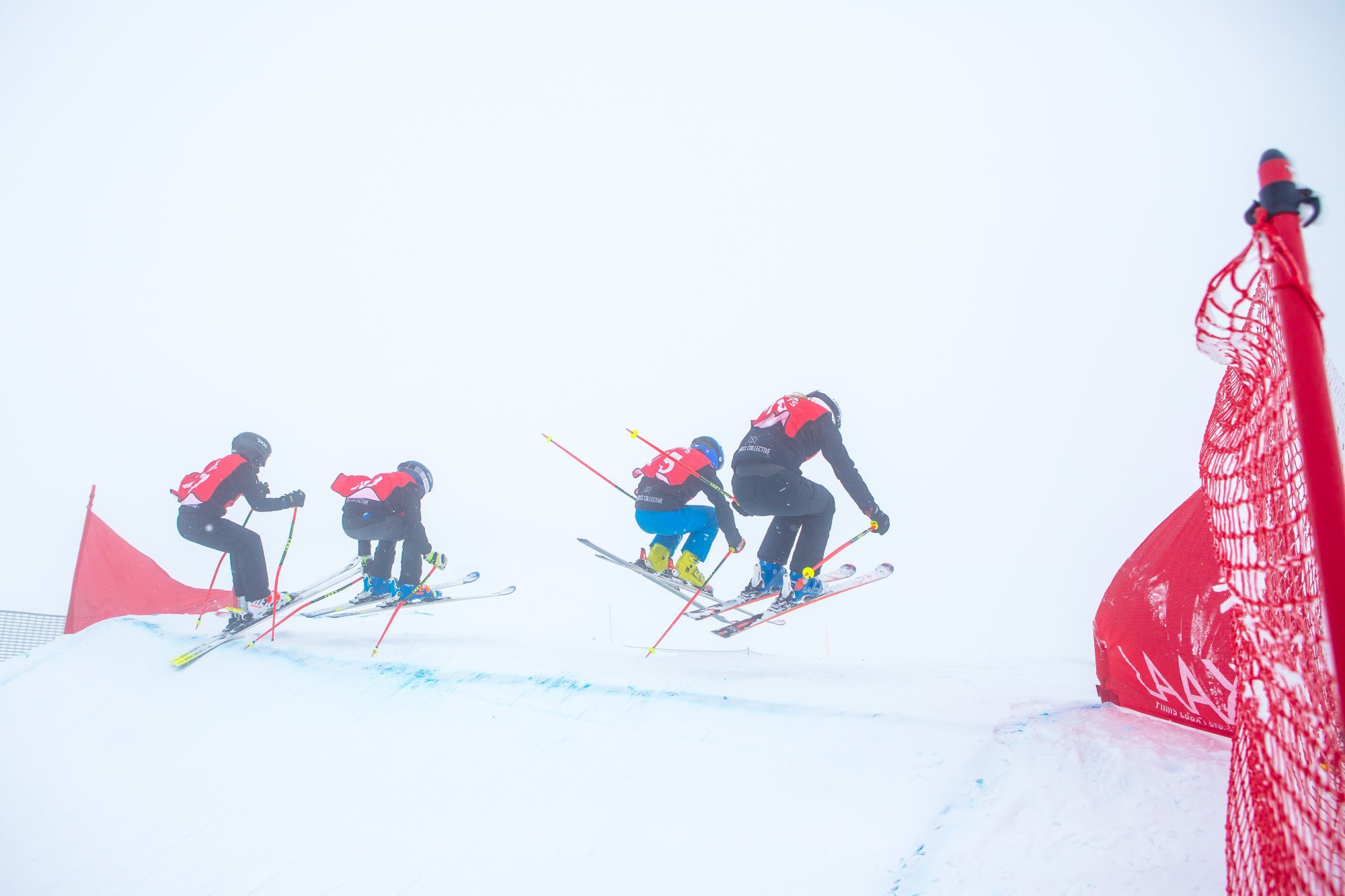 On what was supposed to be Day 3 of competition, the snow came down and it came down fast, with over a metre falling. Unfortunately this meant the cancellation of the half pipe events. However, it meant that when the third day of competition did come around, up on the mountain, LAAX was looking like a powder paradise. The talented snow park team had done an incredible job of clearing the snow so that the slopestyle course could run perfectly, which set us up for an absolutely epic day of riding. In a BRITS first, both ski and snowboard slopestyle took place on the same day and with everyone in one place, this created an awesome final day atmosphere.

Slopestyle is always one of the most entertaining events to watch and these athletes did not disappoint, putting in runs of exceptional calibre.

Tom Greenway and Amy Clayton continued their winning form with two more top podium spots, adding to their Big Air gold medals and cementing their status as ones to watch in the next few years.

On the snowboarding side, Matt McCormick put down a huge score in the last run of the day, a BS double cork 1080 mute to cork to 720 truck driver in the kickers, head and shoulders above the competition and proving his dominance after narrowly missing out on the Big Air gold earlier in the week. Mia Brookes took victory on the ladies’ side, continuing to show why she’s one of GB’s top young prospects.

However, what we love so much about the BRITS is not just that it showcases the incredible snow sports talent that we have in Britain, but that it brings British mountain lovers together for a week of sports, music, games and parties. Whether it’s Ed Leigh’s notorious quiz night, ski movie screenings or fancy dress parties, everyone is full of good vibes. How could you not be?! In one of the best resorts in the Alps, soaking up the late season sunshine with both old friends and new. Nowhere else will you find yourself blaring out Queen on a karaoke stage shoulder to shoulder with an Olympic medallist, or sharing a chairlift with some of the world’s biggest freestyle names (who can often be found tearing up Laax’s famous snow parks).

The BRITS is certainly one of the best weeks in our snow sports calendar and one we would always recommend to anyone looking for an action-packed week on the slopes and some healthy competition, no matter your age! 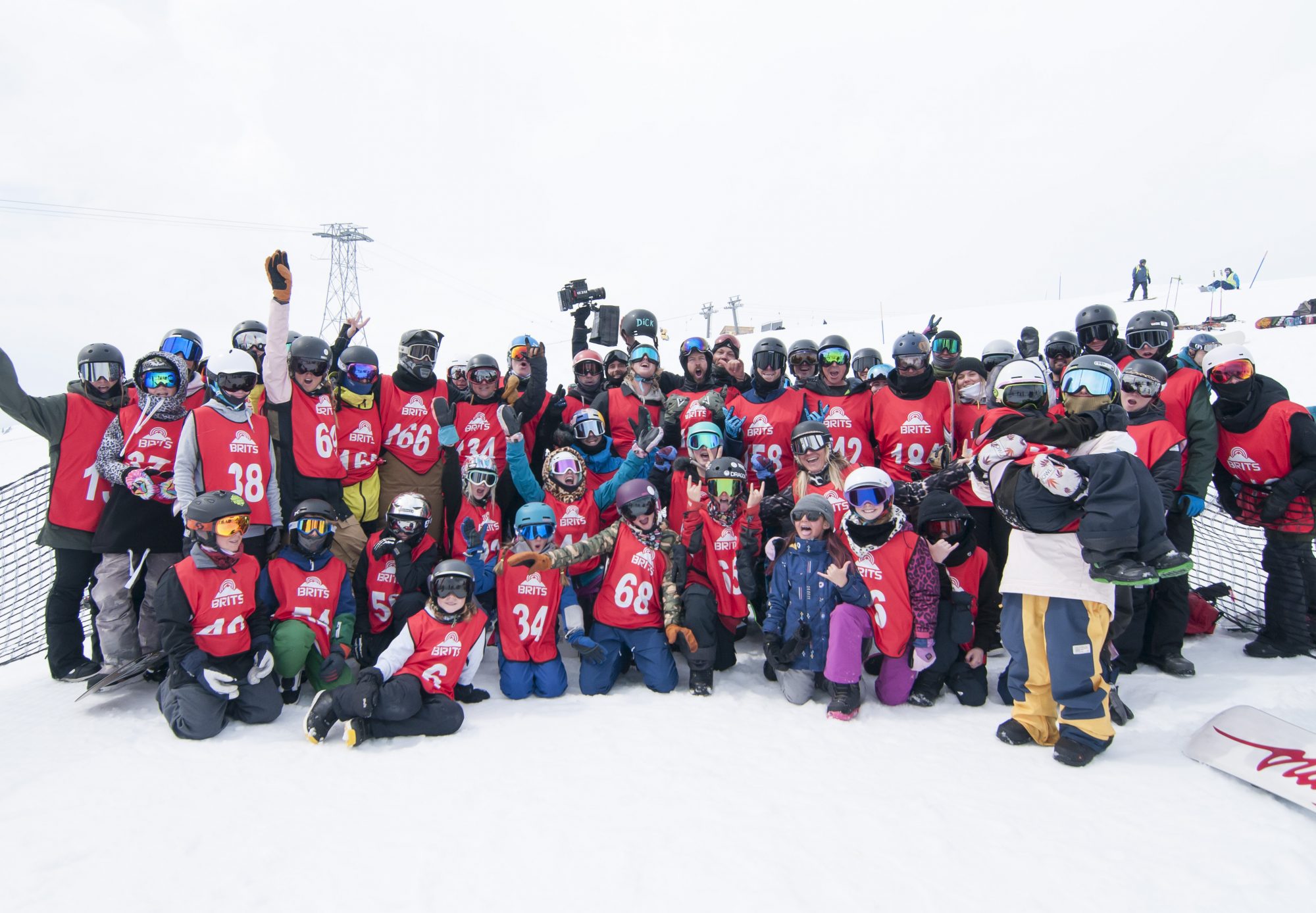 A week of great competition is nothing without the perfect venue though, something that the BRITS gets bang on every year in the freestyle Mecca that is LAAX. A world-class ski area that encapsulates the resorts of Laax, Flims and Falera, the skiing here is fantastic, with 235km of varied runs for skiers of all abilities. If, like us, you’re lucky enough to get one of LAAX’s spectacular powder dumps, the area also offers epic off piste opportunities that are sure to entertain even the most seasoned powder hound.

However, the jewel in LAAX’s crown is definitely its freestyle setup. The area surrounding the Crap Sogn Gion is a playground for skiers and snowboarders looking to improve their skills, with four snowparks ranging from beginner to pro. Kickers, rails and boxes are everywhere, whether you’re taking on the easy starter areas or the athlete favoured pro lines. The halfpipe here is the largest in Europe, definitely one to be seen to be believed.

Off the slopes, LAAX continues to advance freestyle skiing and snowboarding through the Freestyle Academy, an institution that was the first of its kind in Europe. With trampolines, skate areas, bouldering, foam pits and two large … kickers into a huge airbag, this is the perfect place for freestyle fans to practice their tricks.

LAAX is also one of the greenest resorts in the Alps, something that we massively respect. The LAAX Greenstyle programme is truly committed to protecting the mountain environment and sustainable use of natural resources, ensuring that your ski holiday is as sustainable as possible. 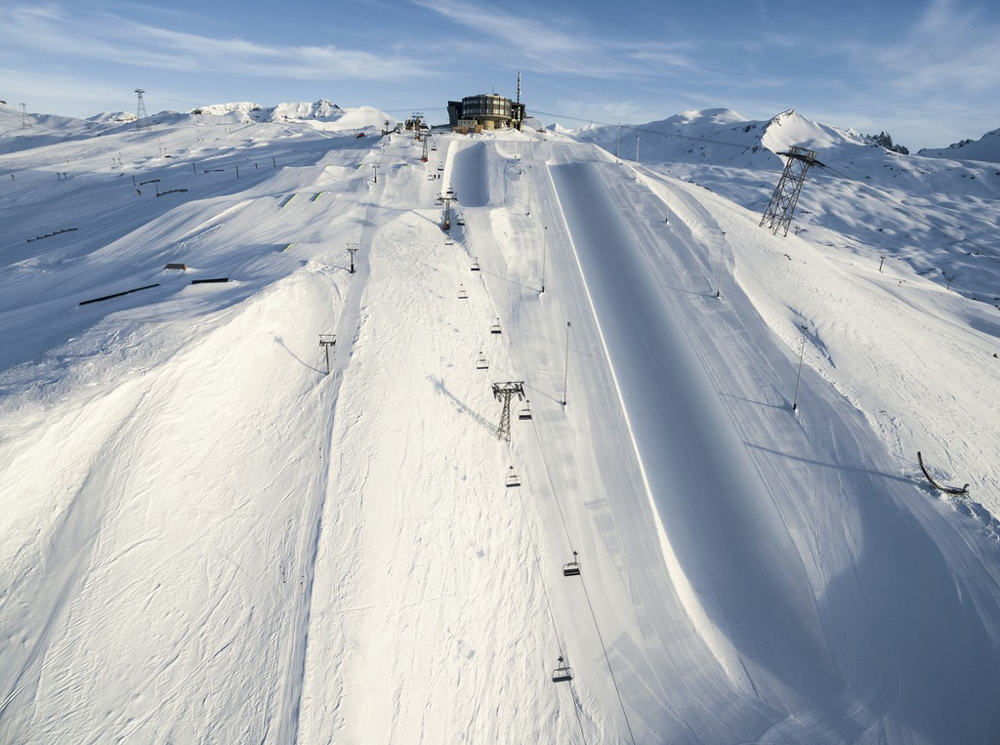