Nationalism is hitting highs not seen for 80 years around the world – back before most ski resorts we visit today had been built. Although ever-more amazing ski lifts are being built each year, so are new walls and fences designed to keep one group of people separate from another group of people. It seems like a good time to remember that mountains and snow don’t recognise lines drawn on the map by men. In even happier news, you can actually ski across borders from one country to another, often without restriction. Here are six of my favourite ski regions crossing borders …

From France to Italy – La Rosière to La Thuile

There are a number of routes by ski lift and piste across the French-Italian border, including via the famous Milky Way, which links the French ski area on Montgenèvre with the slopes of neighbouring Claviere on the Italian side and on to bigger Sauze d’Oulx and Sestriere – a combined 400km of piste. That’s the route reputedly taken by Hannibal and his elephants en route to Rome a few millennia before the ski lifts went up. I remember skiing over the border back before the EU’s internal borders came down and being asked for my passport by a border guard in a sentry box at the top of a ski lift – very surreal.

But the border crossing between La Rosière and La Thuile, the Espace San Bernardo, is another popular choice. Here you ski under an old border fort if you cross from the French side and ski over a vast plateau before descending into Italy, perhaps on the Women’s World Cup Race piste, for a real espresso and slice of pizza before heading back.

From Austria to Switzerland – Ischgl to Samnaun

It’s possible to ski between a rather remote corner of Eastern Switzerland and the famous Tirolean resort of Ischgl in an area called the Silvretta Arena – one of Europe’s biggest with its 240km of ski runs.

As well as being famous for its annual Santa Claus World Championships, Samnaun’s remote location has earned it duty-free status in Switzerland, so rather like the ski areas on Andorra and Livigno in Italy which have the same status, you’ll find it full of duty-free shops selling perfume, alcohol, consumer electronics and there are also a surprisingly large number of big petrol stations for a small mountain village. The piste across the border is known as the ‘Duty-free run’, but skiers beware: there are border police empowered to carry out random checks to ensure that you are not carrying more than your duty-free allowance, or any cheap petrol, in your backpack.

From Slovenia to Italy – Kanin to Sella Nevea

When a cable-car was created across the Italian-Slovenian border in 2009, it had some special poignancy. This was not just a national border being skied across but the former iron curtain that divided West and East Europe during the Cold War. Slovenia had then been a part of Yugoslavia and perhaps the first decade of the noughties was the high tide of the move for borders coming down which began with the break-up of the Soviet Union before the current surge of nationalism began.

But apart from this political significance this ski run has other selling points. For one thing you can look down across to the Adriatic Sea from the top, and it also has a great record for snowfall. In the year the lift opened, I reported 13m of snow, the most in Europe, and just last spring it re-opened after pandemic lockdown restrictions were eased in Slovenia in late May and staged the country’s national ski championships, believed to be the first such post- lockdown ski event anywhere in the world. 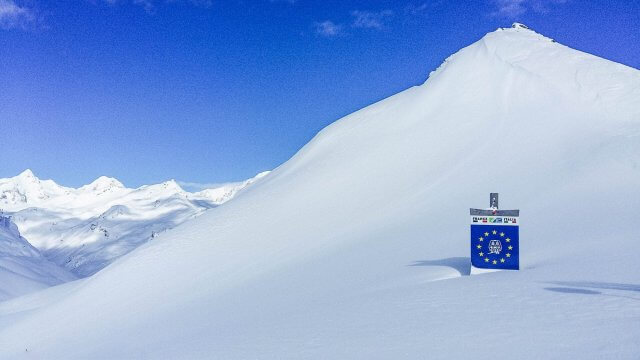 From Italy To Switzerland – Cervinia to Zermatt

One of only two outdoor ski areas in the world open every day of the year for skiing or boarding, weather permitting, Zermatt also operates Europe’s highest lifts up to 3,899m. Cervinia is open for most of the year too, offering cross- border ski lifts from spring to autumn to access the glacier and some of the world’s great ski descents from the Klein Matterhorn down over the border on a glorious long cruise down in to Italy. Better still, you can buy a ski pass in Italy for the same area covered by a pass bought on the Swiss side.

From Sweden to Norway and back to Sweden – Riksgränsen

Riksgränsen is a remarkable resort in so many ways. Located 250km north of the Arctic Circle it’s so cold and dark here in midwinter that lifts don’t start running until late spring, and then open at midsummer in June, by which time there’s skiing under the midnight sun. This year it was the only northern hemisphere ski area to operate its normal season through the pandemic. Its

name means “national border” in Swedish and its most westerly run starts in Sweden at the top of the lift, crosses the border into Sweden as you descend then returns back to Norway at the base. How cool is that?

One of the world’s largest and most successful ski areas, with multiple crossing points, the vast Portes du Soleil brings together a dozen leading French and Swiss ski areas. British favourites Morzine, Les Gets and Avoriaz as well as big name resorts like Chattel as well as Champery on the Swiss side are all parts of this vast ski domain with around 600km of slopes. One of the most infamous runs, The Wall, descends from the French side into Switzerland. Very steep with “car-sized moguls”, it’s no shame to ride the chairlift down instead.

The Next Cross-Border Ski Area

Plans for a new ski connection crossing an international border have just been given the green light by the regional government on the Italian side, but still need approving on the Austrian side. The link between the Drei Zinnen (Three Peaks) ski area on the Italian side and the Sillian Hochpustertal ski area in Austria’s East Tyrol is believed to be the first cross-border ski area between the two countries. On the Italian side a new gondola with 10 passenger cabins would be built along with a 2.1km slope down from the border at a cost of around €11m, but another lift and run would be needed on the Austrian side, and that seems to be a less advanced part of the plan.