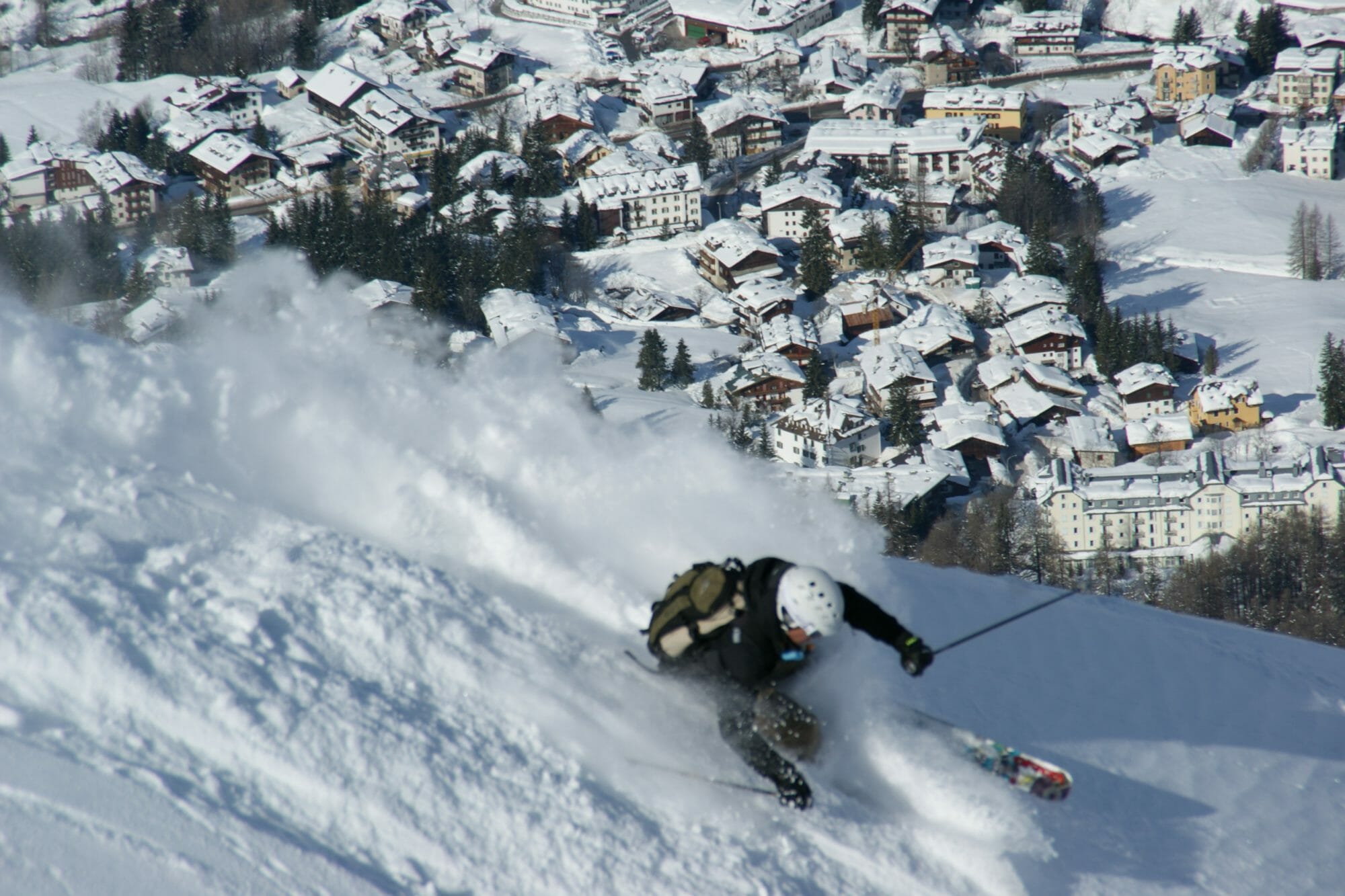 Sometime during my third day of skiing, I realized how fortunate I was to have the runs practically to myself. Part of that chance may have been due to the omicron variant reprieving. Or the sanitary measures were still impacting decisions to fly, and the rest of the world was still catching up on the excellent skiing opportunities in Italy.

My ski app registered my speed at a whopping 92.1 km / h into a 44-degree pitch, leaving me reeling for more as I tackled the Tofana ski resort. I was beaming ear to ear with a big grin. Who wouldn’t be with mild temperatures and bluebird skies? 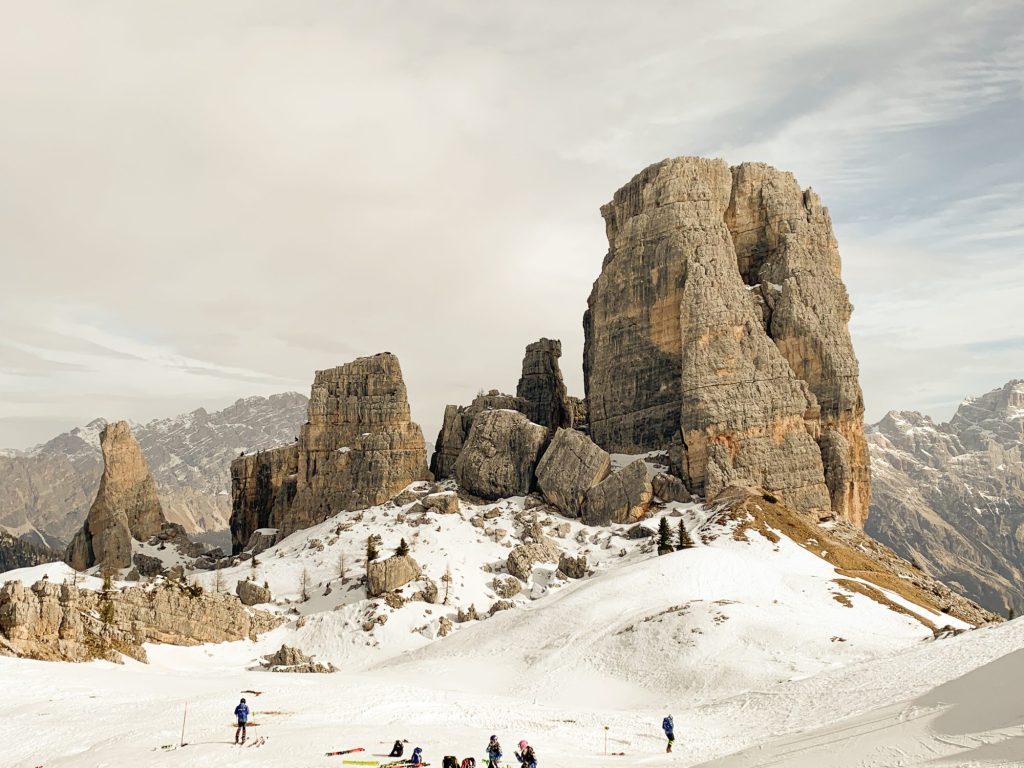 It had been exactly twenty years since I last skied in this part of the world, and I was finally able to come back specifically to Cortina d’Ampezzo to discover this prized jewel – better known as the Queen of the Dolomites! Given the vast territory of interconnected runs within the Dolomite mountain range, anyone who has skied here knows the necessary planning required. The mountains differ from the typical alpine norm, with the callosal peaks that up upthrust resembles cathedrals, castles and towers. UNESCO designated the mountain range a Natural World Heritage Site in 2009.

Getting to Cortina is less than a two-hour drive from Venice airport, and it’s worth the investment to sneak in a couple of extra days to visit this gem in the winter, as you will most likely avoid all the crowds. The last stretch offers many bends and hairpin turns that cut through numerous high-alpine villages speckled along the way. At the top, some of the highest peaks unveil in a dramatic mountain mosaic that goes from pale and bland grey to shades of deep golden yellow, orange and pink during golden hour. Every day provides a unique view of these rocks displaying the special glow across the horizon.

It’s the end of the day and the golden hour once again upon us, and some people point out to the towering mountain peaks and say, ‘E’ lì che scieremo domani’ – that’s where we’ll ski tomorrow – while admiring the fading minutes of daylight. The week focussed primarily on discovering the Cortina region and the slopes that range from 1217 m – 2828 m, and we didn’t pursue the much revered Sella Ronda. Cortina is part of the 1,200 km Dolomiti Superski domain. Several ski areas make up the 120 km of local slopes, Tofana, Pomedes (the largest), and both are accessible by lifts from town. A well-organized network of ski shuttles takes you there from most hotels, as the ski-in and ski-out options are limited. If you are looking for ski-out options, a good location is Hotel Argentina. The slopes from Faloria are reached by the town centre cable car and provide access to the smaller Mietres ski area. A new 4.5 km gondola lift, Skyline Cortina, can now easily access Tofane (Son dei Prade) 5 Torri (Bai de Dones), the Lagazuoi ski area, and the breathtaking ‘Hidden Valley’ from which can begin the Sella Ronda circuit via Alta Badia. An educational alternative to the Sella Ronda is the Great War Ski tour (known as the Super 8) – a 43 km ski circuit along the Cortina outpost of Cinque Torri-Lagazuoi. The open-air museum of the Great War preserved historical evidence and relics of the conflict between Italy and Austria. 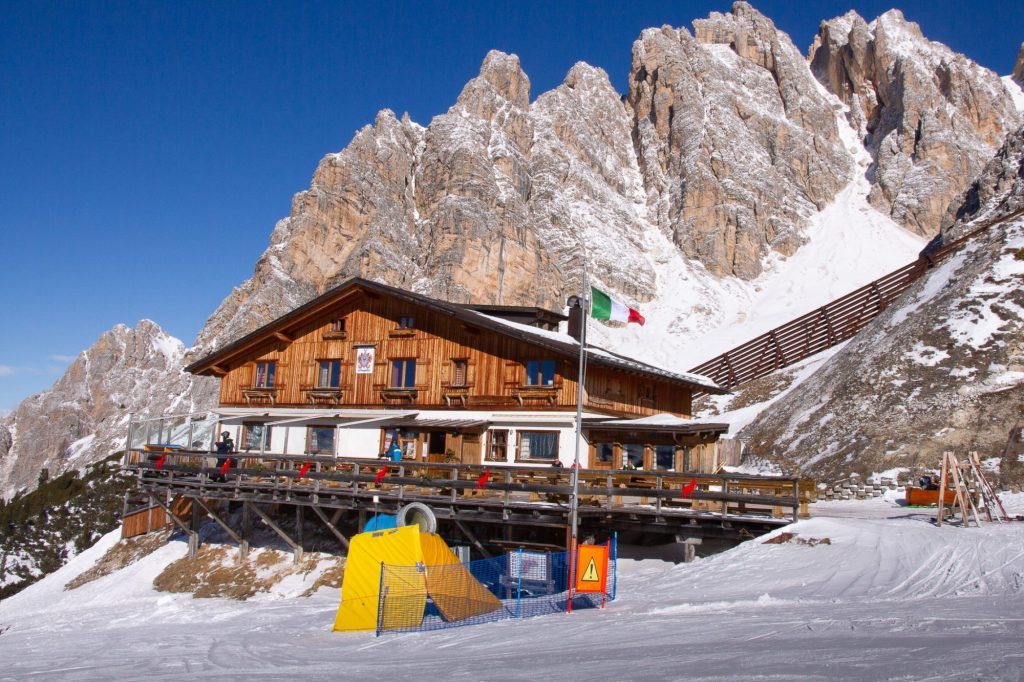 The upscale town of Cortina D’Ampezzo is a one-stop-shopping town and is the most luxurious ski area in the country, offering a stunning backdrop and exceptional skiing. Following the 1956 Winter Olympics, which occurred here, Cortina lured the world’s most attractive individuals who began flocking to the expensive Italian town, making it their destination for many years. The area is also known as the backdrop to the 007 thrillers “For Your Eyes Only.” Today all of the upscale stores (along with their price tags) and hip entertainment options you’d anticipate of a sophisticated European ski resort are very much there, even though the clientele has changed significantly. The town will reprise that Winter Olympics role in partnership with Milan in 2026, assuring the immediate area and region a much higher profile in coming years.

But beyond the glitz and shine, much more here meets the eye. One can choose to stay in town or complete a circuit in the ski huts known as rifugios. If you are into backcountry skiing, there are plenty of options. You will quickly discover that very little, if any, of the pretentious glitz rubs off on Cortina’s locals. They are proud of their environment and are hospitable, genuine and friendly with everyone. While skiing there, you may also run into skiing greats, as we did with former World Cup ski champion and local Kristian Ghedina on the slopes. As an ambassador to the area, he took the time to chat, discuss and share his perspective of the mountain. 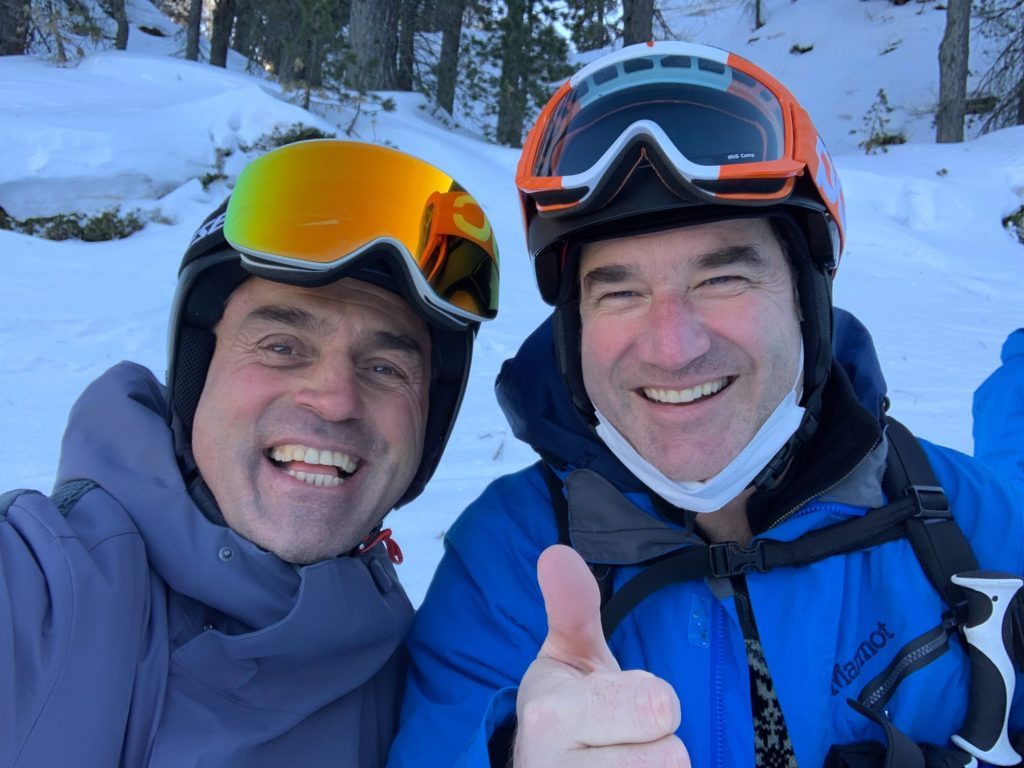 Although the area has a mature tourism infrastructure, there is a well-entrenched respect for the surrounding environment.

Standing at the summit of the Lagazuoi Cable Car lift, the view of the Hidden Valley is stunning, and it seems as if the time has come to a standstill. For Stefano Illing, Managing Director of the Lagazuoi lift Company, the preservation of the authentic lifestyle must be at the core of the region’s mission.

“Mountains are this other place. The ‘otherness’ emerges here in the values of the people, the way of life, resiliency and part of our fibre. Fortunately, we will never tame nature in the mountains as much as we’ve done so in the valleys, and we still know that we must adapt to an ever-evolving situation.’’

That situation extends right into the different family-owned, full-service alpine rustic restaurants referred to as rifugios. 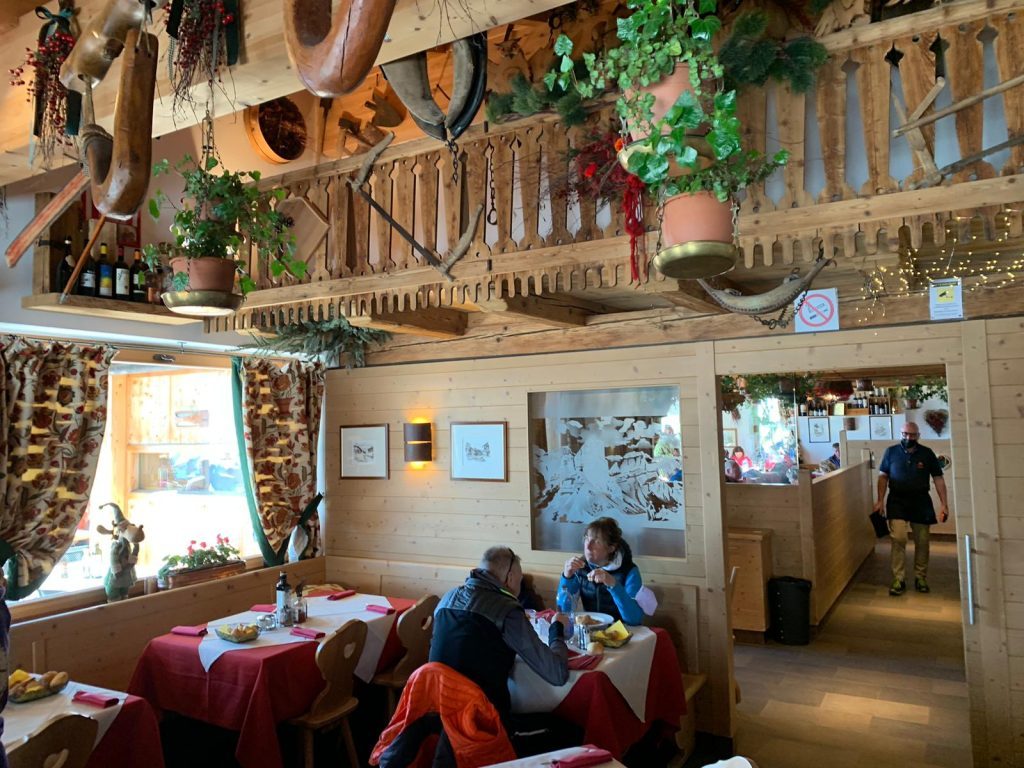 The cuisine is stellar and affordable, and the wine lists are extensive. Most North-American ski resort operators would stand to learn a few things about the service, quality of food and the friendliness and charm of these exact locations. There is quite an array of them spread throughout the Dolomites, and you’ll also find some near Gondolas, so you can take a ride up for a meal if you are not planning to ski.

It’s hard to go wrong with Cortina. Looking down at my phone application at the end of the week, I clocked in 272 kilometres of skiing in six days. Despite trying hard, I never came close to registering the same speed during the rest of my week! I was ready to hit the spa.

Costs in Cortina for one person were approximately: 2,000 euros (transportation, accommodations, lift ticket, meals, ski rentals) inclusive of a two-day stopover in Venice.

All pictures credit Frederick Wallace except top and bottom images.