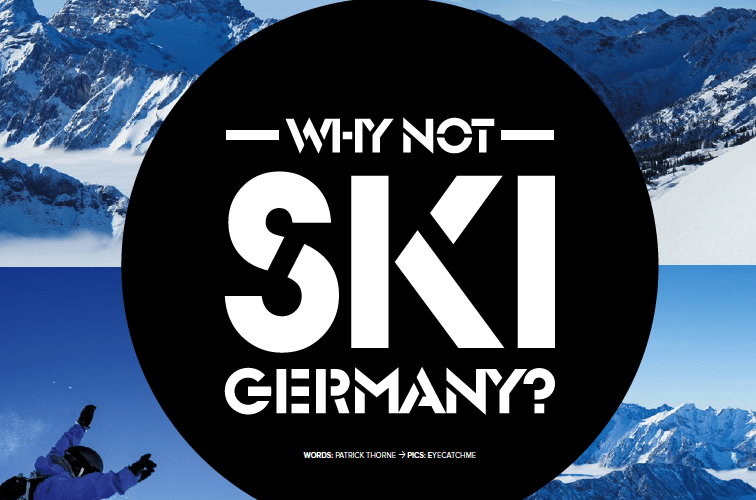 Why Not Ski Germany?

Skiing in Germany is not something many Brits do these days, which is a pity as the southern parts of the country are home to many magnificent ski areas. In fact, Germany was once quite a popular choice with British skiers. From the late 1960s to the 1990s package tours were organised and German ski destinations were in the big brochures. But then in the era of the Deutsche Mark, Germany got a reputation, like Switzerland, for being one of Europe’s most expensive destinations, and its popularity in the UK waned.

Fast forward 20 years and things are very different, and German skiing deserves a fresh look! To begin with, relative prices have dropped, in part thanks to the Euro and in part due to low inflation in Germany. Prices have risen in other Alpine nations more quickly, and German skiing has dropped into the “most affordable” bracket.

Then there’s the fact that it’s now much easier to reach. Most of the package tours have gone, but low-cost airlines have created routes to German Alpine airports, meaning ski centres that were once a long transfer to reach from Innsbruck or Munich are now much closer. The Allgäu Airport at Memmingen in particular has been greatly improved in recent years and offers direct Ryanair flights from Stansted or Dublin.

So this winter is the time to leave the crowds behind, head north of the Swiss and Austrian border and ski in Germany!

One of Germany’s biggest and best-known resorts, as well as its most southerly, Oberstdorf has four different ski areas, including the largest linked ski area on the northern side of the Alps, Germany’s longest ski run and an area lift pass that extends across the border to include areas in Austria – the Kleinwalsertal ticket with 128km of runs. With slopes up to 2225m high and over 1400m of skiable vertical, snow cover is good and backed up by snowmaking. There are runs for all abilities from gentle family slopes to high-speed FIS-accredited racing pistes. Oberstdorf is located only 40 minutes from Allgäu Airport at Memmingen, and once you reach the resort a free ski bus service links everything together.

Oberstdorf is in fact popular with families all year round, and there’s lots to do here besides the skiing and snowboarding. Ski Jumping World Cup events are staged here annually and cross-country skiing is very popular too – in fact, in 2005, the Nordic Ski World Championships took place in the resort for the second time since 1987.

Söllereck is Oberstdorf’s “family mountain” with 12 slopes to choose from and 9.5km of runs. The recently added Söllereck lift is Germany’s longest six-seat cable car  with easy boarding and panoramic views as you ascend.

The Nebelhorn is the highest ski resort in the region meaning normally great snow, and there are snow cannons too if needed. From the top you have a view of over 400 peaks, giving it its local nickname, “the stage of the Alps”. There are 13km of runs including a superb 7.5km slope all the way to the valley. There are three challenging black runs here but also easier runs and a great 2.5km-long toboggan run.

Finally the linked Fellhorn/Kanzelwand areas represent the biggest of Oberstdorf’s ski areas with 41.9km of well-prepared slopes and several terrain parks to enjoy.

The 4★ Hotel Viktoria is well prepared to accommodate British guests, organising direct collections from Allgäu Airport at Memmingen for an effortless arrival.

Located 5 minutes’ drive north of Oberstdorf in the hamlet of Riedweg, with spectacular mountain views, the family-friendly and family-owned hotel has great Bavarian dining opportunities, excellent spa facilities and first-class service. There’s also a daily ski shuttle to all of the different ski areas nearby.

The hotel also works with a ski school in Oberstdorf (www.neue-Skischule-oberstdorf.de) to provide lessons if required and these, along with rental equipment (skis and boots) can be booked through the hotel’s reception in advance. Ski equipment will then be directly delivered to the hotel before your arrival and can be left at the hotel at the end of your holiday. This saves a lot of time for guest who doesn’t bring their own equipment.

The Viktoria’s two á la carte restaurants serve dinner in an elegant, traditional Bavarian atmosphere, or you can choose to dine in the cosy parlour or bar area. Wherever you choose you will enjoy friendly service and delicious dishes served with specially paired wine or refreshing Bavarian draught beers.

Each day begins with a rich breakfast buffet to set you up for the morning and through the day there are different tea and coffee specialities available along with homemade cakes, ice cream, light meals and even hearty snacks. Anyone with special dietary requirements can be catered for.

The hotel’s amenities include a state-of-the-art newly renovated wellness area with a swimming pool, two indoor saunas and an outdoor Finnish sauna, steam bath and hay bed with a wide menu of spa treatments available.

Families are particularly welcome and the Viktoria brings the kids with the ski shuttle to the Söllereck mountain for ski lessons, and also, has an in-house kindergarten offering childcare for children 3 years of age or older from 3.30 pm to 8 pm.  There is a large indoor playing area for children which includes adventure playground facilities including a climbing frame as well as arcade games including table football and air hockey, plus there’s a media room with a Wii and an X-Box. There’s also a special family sauna in the spa area.

So with affordable flights from London to an airport much less than an hour’s transfer from the slopes, and a ski area rich in history where you can stay in a family-friendly hotel where your every need is met – including pick up from/to the airport at the start and end of your stay, and to the slopes every day – this should be the season that you ski Germany!