Ski areas have been issuing messages of condolence following the death of The Queen.

“Everyone at Davos Klosters is saddened to learn of the passing of HM Queen Elizabeth II. Our thoughts are with all our British Friends and the Royal Family as we join the nation in mourning. Rest In Peace, Your Majesty” a statement from the Swiss resort, a favourite of King Charles III.

Zermatt displayed the image above of the British flag projected on the Matterhorn on their social media channels.

In Canada Banff’s ski area said that they were mourning the passing of her Majesty Queen Elizabeth II.

“For more than 7 decades she dedicated her life to public service and inspired millions around the world. Her Majesty’s first visit to Banff was in 1951, a year prior to her coronation as queen.”

In Scotland at The Lecht ski area, the closest to Balmoral 15 miles away, the ski school said,

“All at Lecht Ski School are saddened to hear of the passing of Her Majesty Queen Elizabeth II. Our thoughts are with the rest of the Royal Family and all throughout the Commonwealth.”

The centre later announced it would be closed on Monday 19th September , the day of The Queen’s funeral. 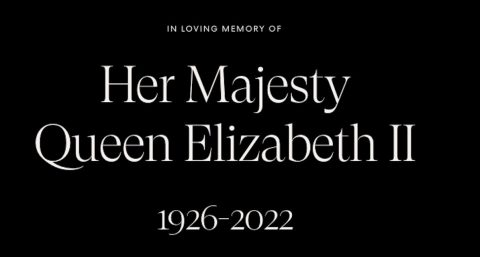 GB Snowsport said, “GB Snowsport joins the rest of Great Britain and the Commonwealth in mourning the passing of Her Majesty Queen Elizabeth II. We extend our deepest condolences to the Royal Family and share in the sorrow that will be felt across the nation and around the world.”