Ski areas in Scotland are still open even for limited snowsports even though the country saw all time high temperatures in the final days of 2019.

A temperature of 18.7C was reached at Achfary, in far north of Scotland, actually well north of the country’s ski fields, provisionally breaking the previous record December high of 18.3C recorded in  1948.

The temperature has been put down to a meteorological phenomenon known as the Foehn Effect  where moist prevailing westerly winds encounter high ground along Scotland’s west coast.

All five of Scotland’s commercial ski fields in the Highlands have now invested in special ‘all-weather’ snowmaking systems which allow them to make ‘snow’ (in fact a snow-like flake ice) within large chambers then spread the snow on the slopes.

If the weather is above freezing it melts as usual, but more snow can be made to top it up and on most areas it isn’t so warm it melts faster than more can be made at this time of year.

The centres use the limited areas that can be covered for beginner runs and snow play like tubing and tobogganing although some like The Lecht create terrain parks too, others, like Glenshee, spread their snow over larger areas to create full ski runs (as pictured above on New Year’s Eve).

Busy for the sledging outside the Plateau Cafe at Glencoe Mountain Resort- strange seeing the Plateau Cafe full when there is no skiing! Looks good for sledging and ski school for beginners on New Years Day. Webcams: http://winterhighland.info/cams/glencoe/On Sunday 5th Jan we're in Stirling – Warren Miller's Timeless presented by Helly Hansen screens at 7.30pm at the Macrobert Arts Centre Filmhouse. Tickets: https://macrobertartscentre.org/secure/book/488145/

A number of the centres including Nevis Range and (for its Snowfactory snowmaking system) Glenshee use 100% green energy to run their snowmaking.

Coincidentally December 2019 marked 10 years since the coldest and snowiest winter recorded in  Scotland in 2009-10 when temperatures stayed sub-zero and snow remained on the ground for the full winter from December to March, even down in the valleys.

The current forecast is for colder weather and snow showers in the week ahead.  Nevis range pictured below. 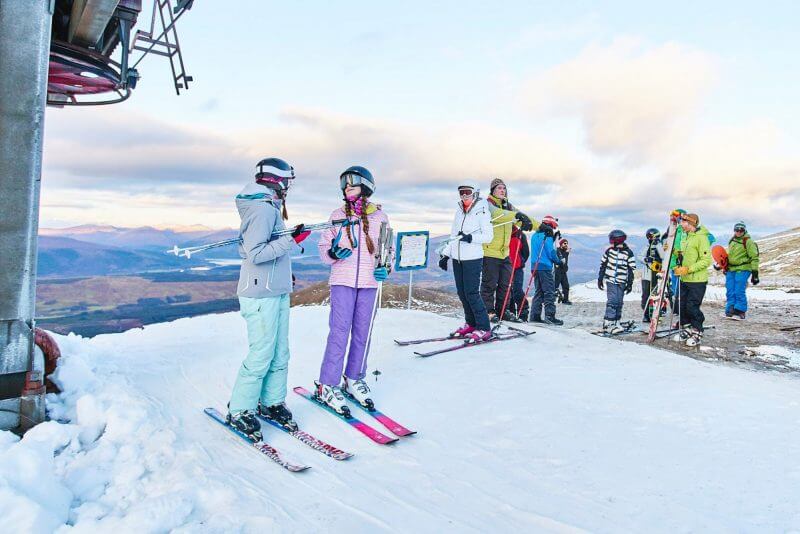