Dave Ryding has scored Britain’s best alpine skiing result since 1988 and broken through for an Olympic top 10 while Laurie Taylor in today’s men’s slalom that he will be a contender for years to come.

It was an event full of drama, with Austrian favourite Marcel Hirscher – who had already won the giant slalom and alpine combined in PyeongChang – failing to finish the first run. That handed a golden opportunity for his rival Henrik Kristoffersen to take gold after topping the timesheet in the first run however the Norwegian remarkably skied out near the top of the second run.

In the first run, Ryding was unable to improve on his start number, finishing 1.37 seconds behind the leader to be 13th. Taylor started in bib 51 but put in a fantastic performance to make the flip into the top 30 after qualifying in 27th.

On the second run, Ryding was the ninth-fastest through the course and improved his position by four places to record his best-ever Olympic result. It was officially Britain’s second-best male alpine result in Winter Olympics history, only bettered by Martin Bell’s eighth in the Calgary downhill in 1988.

On a difficult course which claimed the scalps of more than half of the field including some of the world’s best, Taylor was 25th on the second run to rise one place to 26th overall.

In a sign of where Taylor’s career may be heading, his result is one place better than Ryding’s 27th on Olympic debut at Vancouver 2010.

After the race Ryding said he was content with the result but was left ruing some errors which may have seen him finish higher.

“At the start of the day if you’d said ninth I’d have said , ‘it’s solid’,” Ryding said. “I had a couple of mistakes there that were a bit costly. I feel I could have done more but I think a lot of other people do as well. At the end of the day ninth’s what I got. 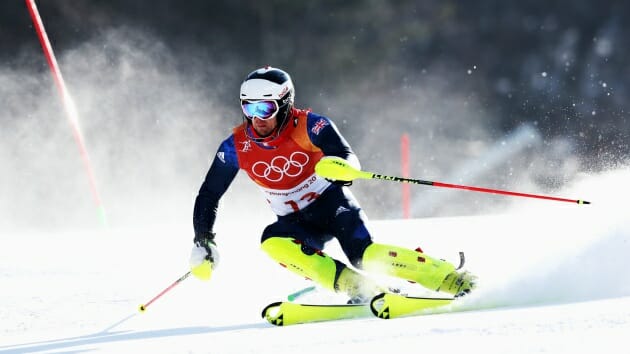 “A top ten at the Olympics; after the dust settles I’ll be pretty proud of and in four years’ time I will have something to really build on.”

Ryding said he was certainly ready to keep pushing on towards Tokyo 2022 to compete at his fourth Games at a time he believes he can be peaking.

“Myhrer is 35, and the last winner, Mario Matt, was also 35 and at the next Olympics I’m 35 so I’ll try to keep that trend going,” he said. “I came to it really late so I’m still warming up. I’m more than motivated to keep going.

“Hopefully I can podium again in between the Olympics to show people I can do it. I believe I’ve got it in me, I’m just not leaving it all out there all the time.”

Following his breakthrough performance, Taylor said that Ryding was an inspiration who motivates him to want to keep improving.

“Watching Dave push the top guys in the world has been great to watch and I look up to him, I want to try and copy what he does,” said Taylor. “I’m so happy to have made it through to the finish line. It was a fight to get down but I’m really happy.

“It was super fun, the first time getting a clean course at one of these events and to finish top 30. That’s where I was hoping for. I didn’t know I could get it so I’m so chuffed.”

Emily Sarsfield’s long-held dream to become an Olympian finally came true today when she completed the seeding run of the ladies’ ski cross.

Missing out on opportunities in 2010 and 2014 due to injury and selection, Sarsfield today made it to the Olympic start line where she qualified in 22nd place.

She now moves into the elimination stages tomorrow commencing with the 1/8 finals.

Qualification ✅…a little frustrated…skied ‘nicely’ but didn’t carry the speed I wanted to…no stress though as tomorrow is a new day and FINALS are on! It’s time for the fun stuff…head to head racing on this crazy track! 💪🙌 Live on @eurosport & @bbc at 1:00am GMT (2:00am CET) Thank you all for the support & messages 😘 @teamgb #WeAreTheGreat #bringonthefunstuff #finalstime #skicross

Sarsfield will be up against sixth-seed Alizee Baron (France) and 11th seed India Sherret (Canada). The top two from this race will continue to the quarter-finals.

The elimination races commence at 1am (GMT) tomorrow morning; Sarsfield has drawn the sixth heat which is scheduled to begin at 1:20am.