A new Hollywood movie, much of it filmed in the Austrian Tirol ski resort of Ischgl, and described by one promoter as a “very black comedy”, is due for release next week.

‘Downhill’ is a Hollywood remake of a successful 2014 Swedish film, Force Majeure, which has the key premise that on a family skiing holiday, as sudden death appears to be imminent from an unexpected avalanche breaking above, the family’s father (Ferrell’s) gut instinct is to save himself, abandoning his family without thinking.

The avalanche doesn’t reach the family and everyone is fine, so the rest of the movie is the family (including Ferrell’s character himself, the wife Billie, played by Julia Louis-Dreyfus, and their two sons) coming to terms with how Ferrell behaved in this “no time to think” apparent emergency situation. 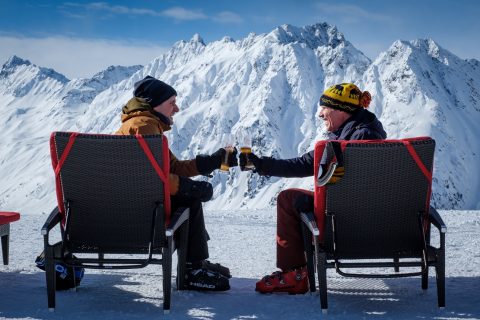 Location scouts from Searchlight Pictures and Walt Disney Studios in Los Angeles visited Ischgl  several times and agreed it suited their exacting requirements for the film, a resort spokesperson said.

“The film powerfully highlights the attractions and beauty of Ischgl and its ski slopes,” said a delighted Ischgl Tourist Director Andreas Steibl, adding that the resort’s existing fans will enjoy the location scenes and have fun spotting their favourite places both on and off the slopes.

Filming took place last winter, with 160 actors, crew and production staff descending on the resort.  The world premiere took place in the US ski resort of Sundance last month and is due for release in the UK a week on Friday, on 28 February.