New Kind of Snow Predicted to be Falling on Alien World

Scientists believe a giant exoplanet (a planet outside our solar system) could get snowfall made of titanium dioxide, a substance that is perhaps best known as one of the active ingredients in sunscreen.

Astronomers have been looking at exoplanet Kepler-13Ab, a world that’s six times the size of Jupiter and 1,730 light years from earth, which orbits a solar system with three stars, very close to one of the three suns, Kepler-13A, through NASA’s Hubble Space Telescope.

According to a report in the October 2017 issue of The Astronomical Journal, scientists believe that daytime temperatures on Kepler-13Ab reach around 2,760 degrees Celsius, not great for conventional snowfall, due to its proximity to its sun.

However they also believe the planet is ’tidally locked’ to star Kepler-13A meaning it is always daytime on its star facing side and always night time on the other.

On similar hot giant planets gaseous titanium dioxide exists in the planet’s upper atmosphere radiating energy as heat, but on Kepler-13Ab astronomers think the temperature differential between the fixed day and night sides of the planet will cause strong winds which will blow the titanium dioxide to the nightside where it cools and condenses into clouds which then “snow” the substance into the Kepler-1Ab’s lower atmosphere. 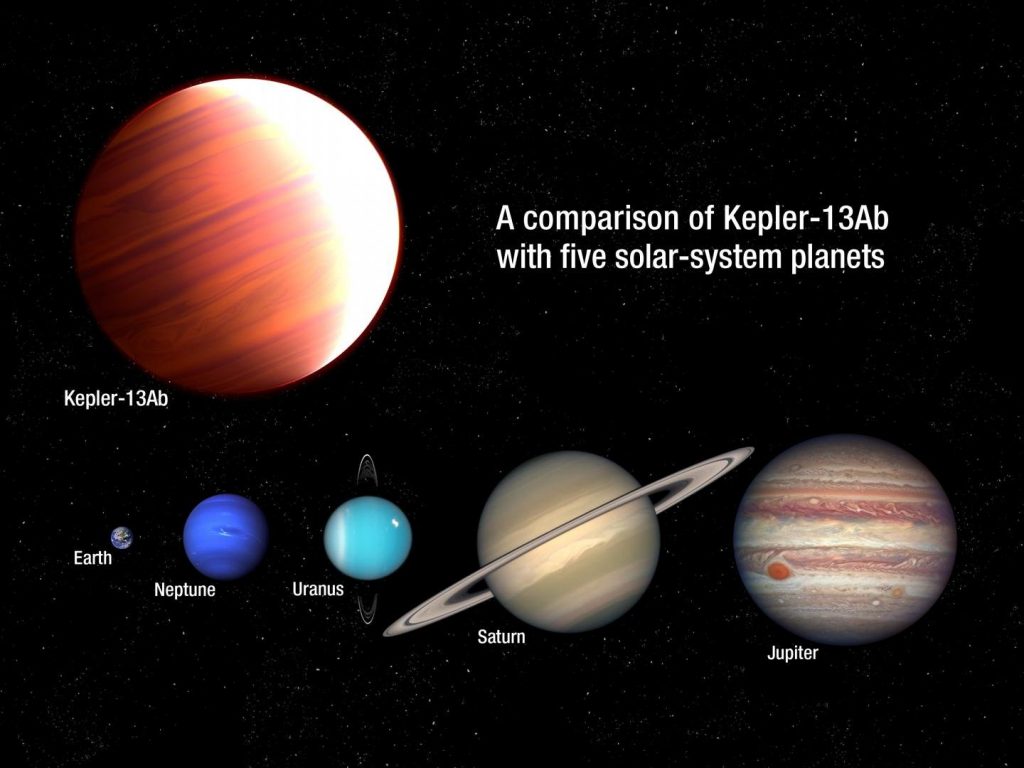 It’s believed to be the first report of titanium dioxide snow ever made.  Snow made of various other substances have been found throughout our solar system.

According to the book Snow In Space these include orange methane snow on Saturn’s moon Titan; pink nitrogen snow on Neptune, yellow sulfur dioxide snow on  Jupiter’s moon Io, carbon dioxide snow on Mars and grey metallic snow on Venus,

“In many ways, the atmospheric studies we’re doing now on these gaseous, ‘hot Jupiter’ kinds of planets are test beds for how we’re going to do atmospheric studies of terrestrial, Earth-like planets,” said study lead author Thomas Beatty, an assistant research professor of astronomy at Pennsylvania State University, adding,

“Understanding more about the atmospheres of these planets and how they work will help us when we study smaller planets that are harder to see and have more-complicated features in their atmospheres.”