The huge October snowfalls currently hitting the Alps have seen some big tallies now being reported by already-open glacier ski areas …although most have had to close or delay opening due to strong winds and deep drifts.

The recently opened for the 18-19 season Diavolezza glacier near St Moritz in the Swiss Engadin region reports the most snow over the last 3 days at 142cm – or three inches less than five feet.

The Passo Stelvio ski area in Italy, pictured below, which is in the final week of its six month 2018 summer ski season, reports a metre of snow. 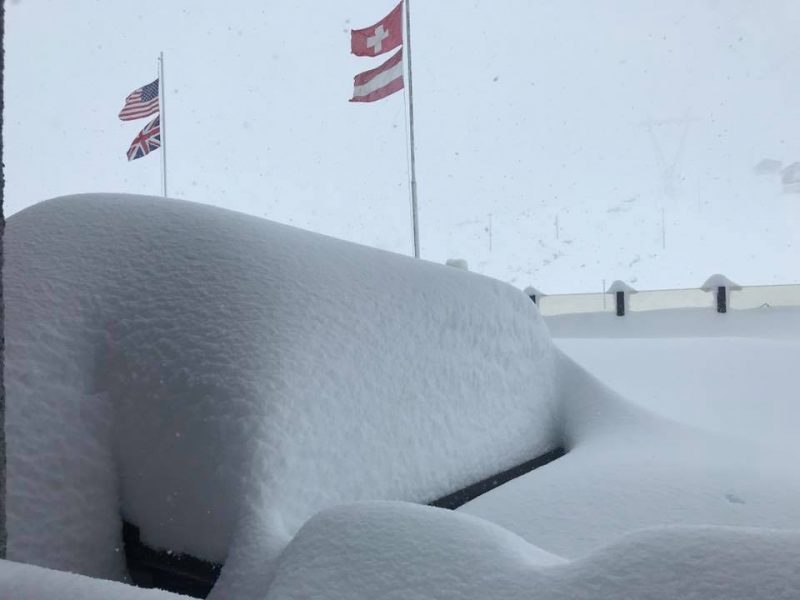 Then in Austria glaciers like Kitzsteinhorn, Hintertux, Molltal, Solden and Stubai (pictured top) have reported 50-70cm of snow.

As a result several October powder alarms have been issued and resorts due to open in just 2-3 weeks’ time from mid-November like Obergurgl and Val Thorens (which posted the video below) are also excited to see their bases building.

Although there were several snowfalls in the alps, particularly on high slopes in Austria, in late August, September and early October it had been dry and warm for the past 4 weeks.  However the snowfalls over the weekend have been some of the biggest in living memory before Halloween.

There’s been snowfall in the Dolomites, Pyrenees, Scandinavia, Eastern Europe and Scotland too thanks to cold air moving down from the Arctic, crossing Europe and meeting the warm air that had been sitting over much of the continent.