The USA/North America is famous for its wide-open spaces and (especially compared to the Alps) empty ski slopes. Skiers travel across oceans to visit, drawn also by everything from spacious accommodation and generous dining to pristine slopes, great childcare, almost no lift queues and perhaps above all very high service standards. The friendly guides welcome you get pretty much everywhere is a big plus too. 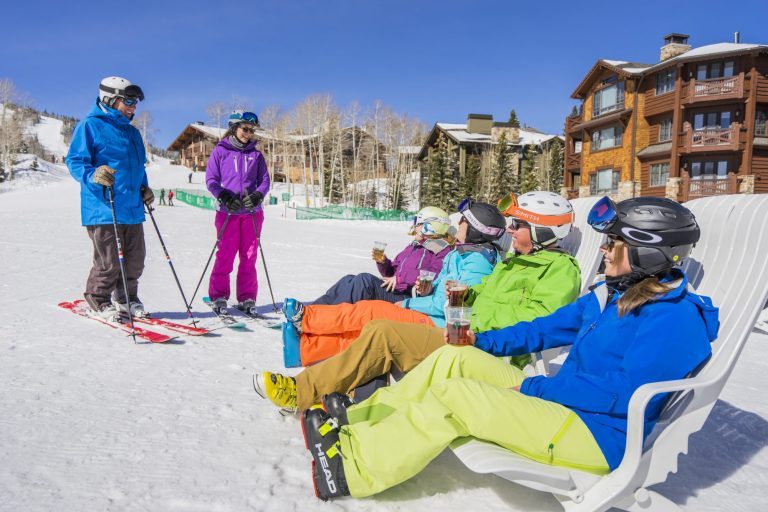 With hundreds of ski areas to choose from it can be tough narrowing down the choices, but if you want to really go big while ticking all the other boxes, Park City in Utah (USA) can’t be beaten.

This classic ski town, also the main alpine ski racing and snowboarding base at the 2002 Winter Olympics, is not only one of the easiest ski resorts in the world to get to, but it also boasts the biggest ski area in the USA. And that’s just one of its local ski centres, besides Park City Mountain itself, there’s also Deer Valley which has won endless awards for its exceptional service standards, besides having great skiing too.

Deer Valley is known as the ski resort that revolutionised ski-area service …quite an achievement in itself as anyone who has skied in the USA expected great service as the norm anyway. But here they’ve managed to go still further with every possible potential inconvenience in your ski day spotted and neutralised. There are smiling staff to carry your gear (the famous ski valet service), open every door, a super-efficient lift network to whizz you to the top of the mostly empty slopes, and happy mountain hosts everywhere to help with any query or issue. For those used to battling onto a ski bus or queuing for everything from rentals to the lift, it’s like you’ve landed on another (much better) planet. 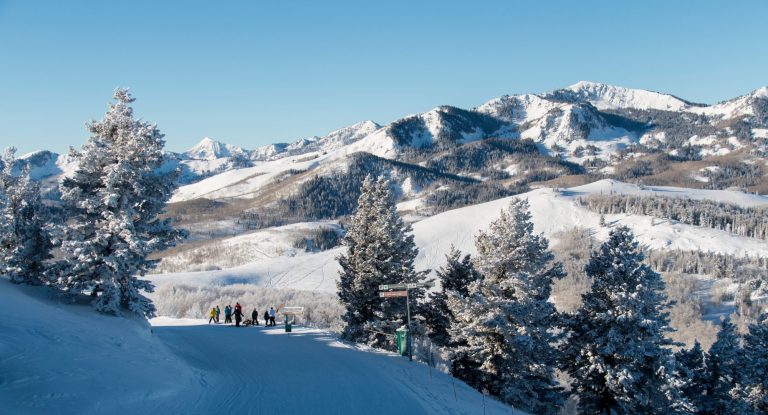 The slopes are nestled in Utah’s picturesque Rocky Mountain Wasatch Range and extend over a huge 2,000 acres of varied terrain spread over six mountains.

To quickly get to grips with all that’s available, four complimentary Mountain Host tours are offered each day, departing from the top of the Carpenter Express chairlift, suited to skiers of intermediate and expert ability. You’ll not only learn about the resort’s terrain and discover the best runs, including descents through beautifully gladed aspen forests and secret powder stashes, spending time with the locals who ski them, but also some history and trivia while you ride the lifts back up. To prevent even the slightest concern of overcrowded trails or lifts, Deer Valley limits the number of skiers on the mountain and at peak times may reach capacity.

There is, in short, something for every skier …but famously in ski circles, nothing for any snowboarder.  Deer Valley is one of just a couple of resorts left worldwide still banning boarders. Well, they know their market. 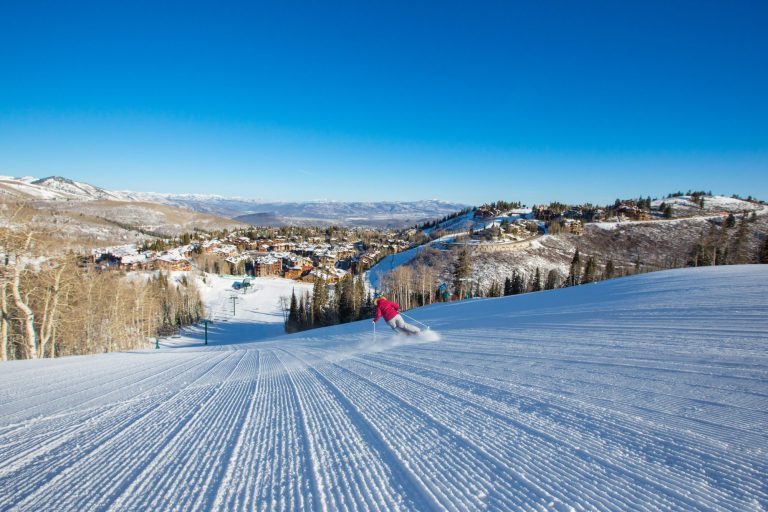 One of the world’s newest resorts, Deer Valley, only celebrated its 40th birthday in 2021, but it quickly built a reputation for its service standard and manicured slopes, grabbing the ski world’s attention far beyond UK shores.

The Deer Valley experience doesn’t start and end on the slopes,  the resort is also renowned for its luxurious lodging and great evening dining options. 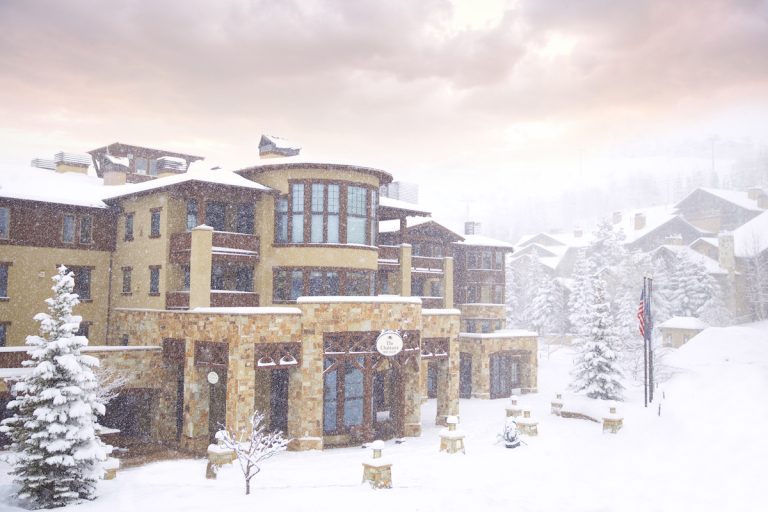 One of the most enjoyable for many is the chance to enjoy a horse-drawn sleigh ride up to the Lodges at Deer Valley for Fireside Dining, where you can try dishes purportedly from the Alps back home and see how they compare. The alpine-inspired menu features four courses served from a fireplace, including fresh seafood skillets, seared meats, locally sourced produce, seasonal flatbreads and salads. Speciality cocktails and a full bar and specially selected wines and imported beers complete the experience.

Park City Mountain is the largest ski area in the USA and the second biggest in North America by official figures (one cartography expert who measured both areas using online digital maps reckons Park City is actually a little bigger than Whistler). In any case, both areas are owned and operated by Vail Resorts, now the biggest ski resort operator in the world. In 2015 the company spent $50m to merge the formerly separately-run Canyons and Park City Mountain ski areas together to form this huge world-class ski area providing over 7,300 skiable acres (3,000 hectares) of diverse terrain suited for every skier and rider. 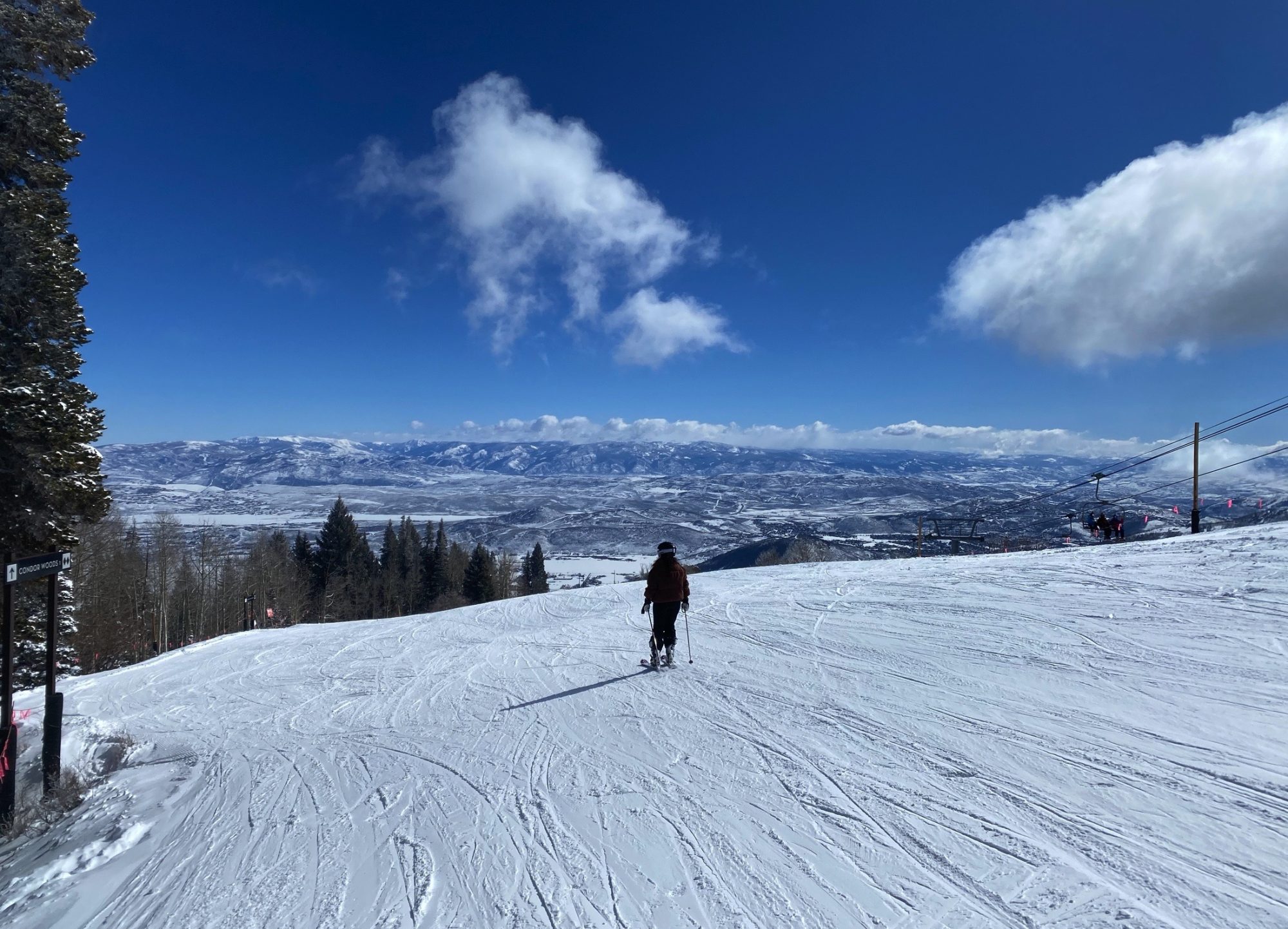 In the years since Vail took over, they have continued to invest millions more dollars back into the resort to further improve it for all types of skiers and boarders. Recent projects include the new High Meadow Park Learning Area, new Over and Out Lift, restaurant transformations at Mid Mountain Lodge, Miners Camp, Summit House and Tombstone BBQ, added snowmaking and more.

Once a silver mining settlement, historic Park City is today one of the world’s great ski towns. Nestled in the valley flanked by Park City Mountain Resort on one side, and Deer Valley on the other, Park City’s Main Street is the heart and soul of this mountain town and is now a centre for culture, fun, shopping, dining, partying and much more besides. 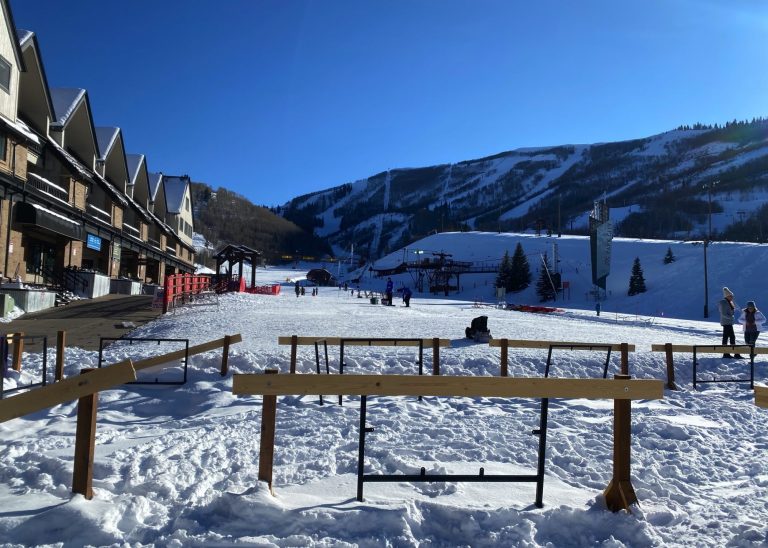 The town has endured booms, busts, fires and freezes down through the decades but its adventurous spirit has never dimmed. Having been established as a raucous silver town, it nearly faded into history as a ghost town before the plentiful snowfall each winter was turned into ‘white gold’ with the rise of the ski holiday business.

From then on there was no stopping Park City as it grew into a world-class destination and host to global events such as the 2002 Winter Olympics and the Sundance Film Festival.

Main Street is home to over 200 unique businesses including more than 100 independent boutiques and at least 50 one-of-a-kind restaurants. There are spas, nightclubs, art galleries, and even a distillery, all close at hand, although you can jump on the free Town Trolley bus if your legs get weary.

A big part of Park City’s appeal is the apres ski scene and, as with the ski slopes, there’s a huge and eclectic choice.  Most are walk-to from the town base at Park City ski area and just five minutes away from Deer Valley (which also has its own great apres venues). 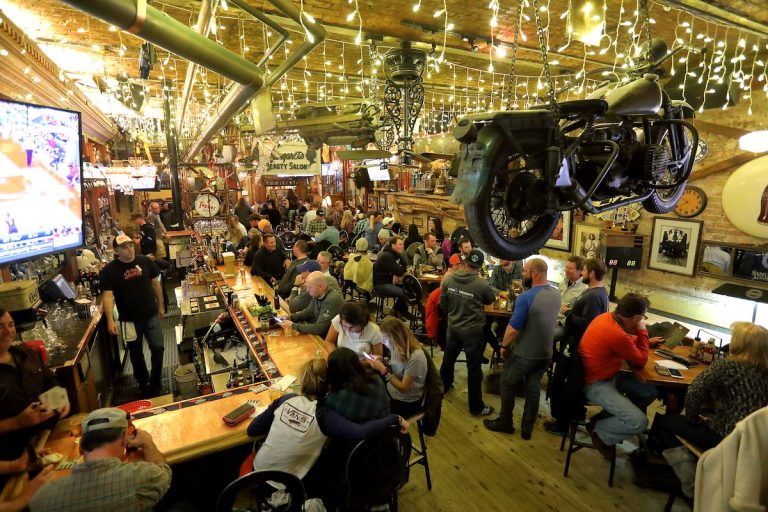 The No Name Saloon, reputedly Utah’s busiest bar, is a must-visit with its old-time cowboy vibe. The home of the Buffalo Burger and centrally located on Main Street, No Name Saloon has global and local nostalgia covering the walls and ceilings and is as much a visual delight as it is a one-of-a-kind experience. The saloon houses three Bars and a heated rooftop patio and back indoors there are 17 HD TVs strategically located for watching all your favourite sporting events.

The High West Distillery, located close to the base of the slopes in Park City, was founded in 2006 by David Perkins and his wife, Jane. David, a former biochemist, moved to the city nearly 20 years ago due to his love of the Old West and was inspired to open his own distillery after seeing the parallels between the fermentation and distilling process and his work in biochemistry during a trip to the Maker’s Mark Distillery in Kentucky. 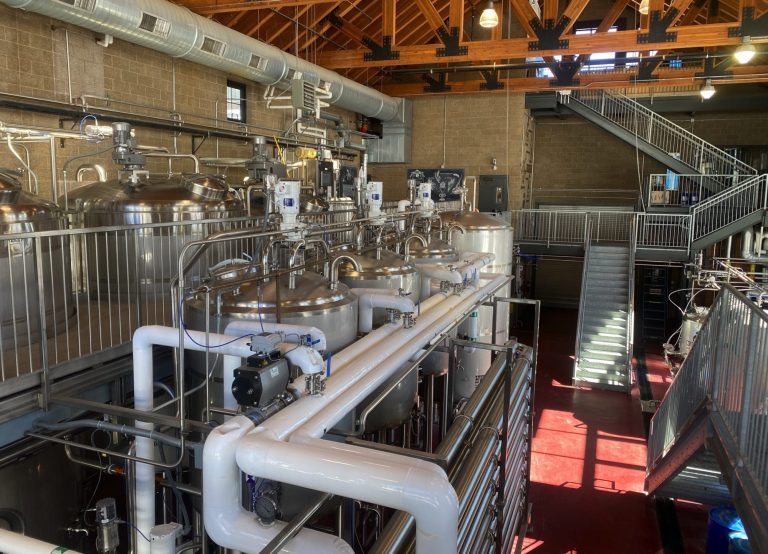 High West began with humble roots, opening a small, 250-gallon still and Saloon in a historic livery stable and garage. What was once a small operation in downtown Park City has grown to be an internationally-recognised brand with four unique locations.  Meanwhile, the Saloon continues to operate as a must-visit gastro-distillery, featuring alpine-inspired western fare alongside the original still.

Park City Social Club is another Park City institution, also located on Main Street. Its theme is pies – locally made, fresh and hot. They do tend to sell out early most days so, as it’s open from 3 – 9 pm, it’s a good stop straight off the slopes. But beyond the pies, this is also a micro-distillery serving up craft cocktails like Old Fashioned or Gin Bramble. In 2021 the bar’s operators Alpine Distilling’s Gin was awarded ‘Gin of The Year Gold’ in London.

It’s worth noting that public transportation is efficient and comprehensive around Park City as the resort town aims to have its operations completely carbon neutral by 2030. Park City was the first mountain town in the United States to operate a zero-carbon public transportation fleet including a fleet of buses that travel an express route to connect passengers from Main Street around Park city and out to Deer Valley a few miles away. 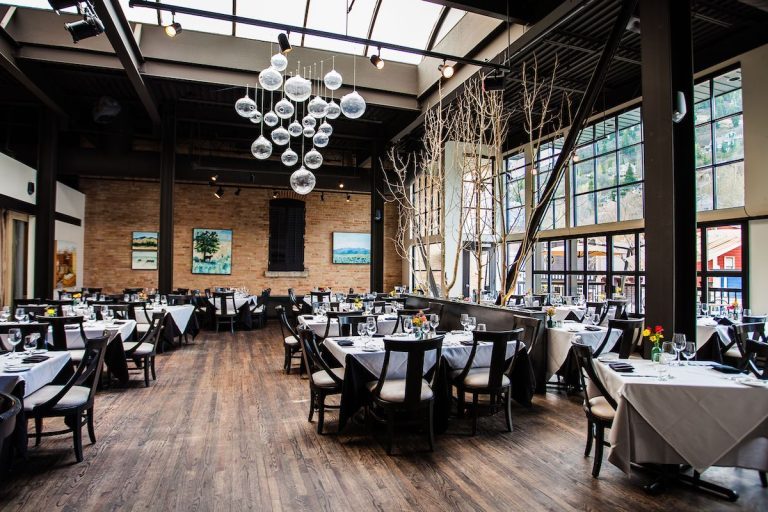 In addition, those staying at all Deer Valley properties can request drivers to shuttle them to and from downtown Park City as well. Skiers just need to install the Deer Valley Direct App upon arrival, enter a code and then have access to call drivers. It’s like Uber just for Deer Valley guests.

You need to spend months in Park City to even scratch the surface of all there is to do here, but the memory of hosting the Salt Lake 2002 Olympic Winter Games here remains strong, even if its 20 years ago now, and the town has a first-rate facility to both commemorate the games and provide year-round winter sports training for the current generation of athletes. 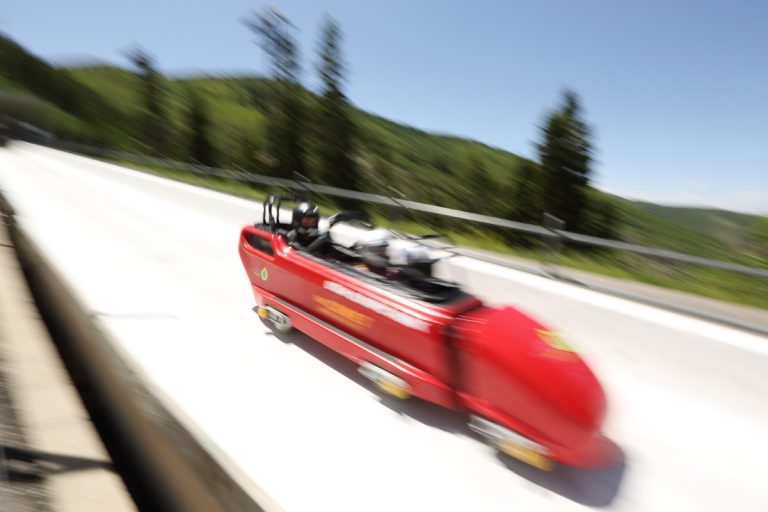 At 7,300 ft. elevation, the Utah Olympic Park still buzzes with excitement and enthusiasm that one might have expected 20 years ago when the Park hosted five events during the Salt Lake 2002 Olympic Winter Games

The nearly 400-acre park houses one of only four sliding tracks in North America for bobsled, skeleton and luge and there are six Nordic ski jumps, a 2002 Winter Games museum, and a multitude of adventure activities available.

Park City is one of the easiest resorts to reach, just a short transfer from Salt Lake City, just 25 miles away via a modern, four-lane highway. You can travel here on most Transatlantic airlines, usually with one connection, although Delta Airlines operates a direct service from Heathrow. The airport is in the middle of a multi-year $4.5 billion renovation that will see five terminals become two, the first of which is already open and it become one of the world’s great airports of the twenty-first century.

At the time of writing the USA is only allowing non-US citizens who have proof of Covid-19 vaccination to enter the country, however, this ruling could be dropped at any time.