Skiing in Scotland has long been a rite of passage for serious skiers. Scotland’s wild, rugged ski slopes create a unique opportunity for on-snow adventures, particularly those that involve heading up as well as down. Ski touring here grants access to some of the UK’s most spectacular landscapes, and some of the most fun you can have on British snow.

Over the past winter season, experienced Scottish ski tourer Alistair Todd teamed up with esteemed mountaineering brand Mammut to explore the best backcountry ski spots in the Scottish Highlands. With over 25 years experience in the area, Alistair is chair of the Ski Touring Advisory Group, an organisation that advise Mountaineering Scotland on all aspects of ski touring. With established outdoor photographer Hamish Frost by his side, their journey provides an educated and enlightening take on the unique highs and lows of the Scottish hills amid the typically turbulent weather of the 19/20 season.

Every year Scottish ski tourers expectantly hop onto the winter roller coaster commencing in November and ending sometime in late April or early May. The only guarantees are the emotional highs and lows as winter arrives and then disappears again in quick succession. Conditions can change overnight from the amazing to the non existent and the best days frustratingly often land midweek.

Hitting it right on a good weather day is therefore a mix of luck and good planning, whilst being in the right place at the right time to enjoy a great ski day involves even more luck and a lot more planning. 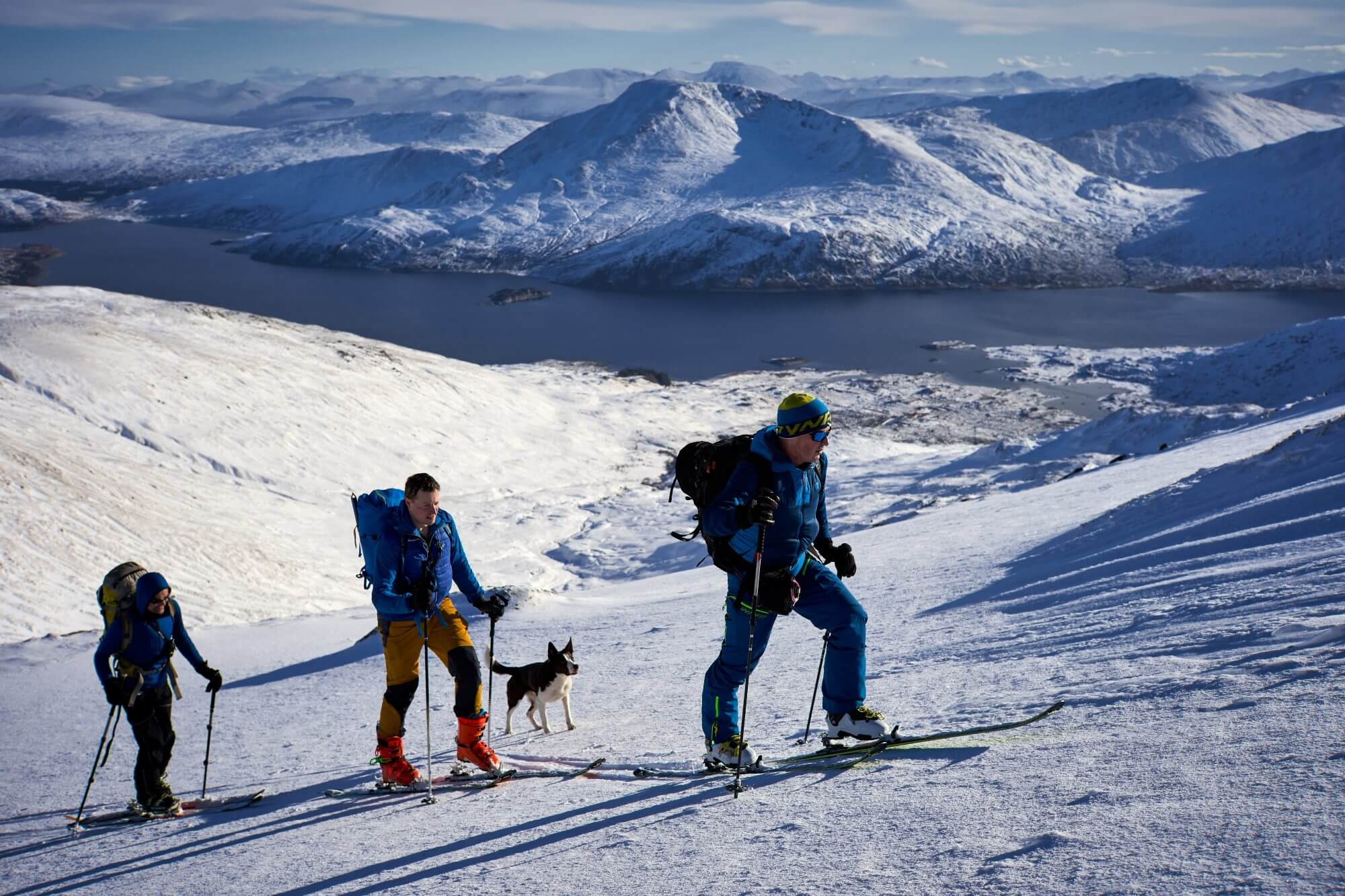 Winter 2019/2020 has been one huge roller coaster with excellent conditions in early November quickly replaced by a stormy December with a couple of failed winter kick starts before a record warm and wet January destroyed the snowpack. February however changed everything with a series of giant Atlantic storms bringing in wave after wave of progressively colder polar maritime air and accompanying heavy snow. Webcams started to show rapidly improving conditions with the snow line dropping as continuous snow pelted the west coast hills.

With the snow improving, plans began to be pulled together, mountain conditions checked out, gear packed and sympathetic bosses tapped up for next day holiday requests in readiness for a weather break. Finally, after 6 weeks of storms, a lull was forecast before the next system, storm Dennis, was due to arrive. With recent snow having been piling into the west coast a decision was made to head NW to Sgurr a’ Mhaoraich (English pron: ‘SKOOR uh Vuh-reech’) located on the edge of Knoydart. Al Bird was quickly enlisted, a call from a friend in Inverness brought a 3rd person on board and several members of the Inverness Backcountry Snowsports Club announced they were keen.

Thursday arrived and the drive west in a perfect dawn heightened the enthusiasm, tempered slightly by still unknown snow conditions. However, after negotiating a twisting snow covered 8 miles of single track road, we rounded the final corner to see a skyline of snow plastered peaks – game on! 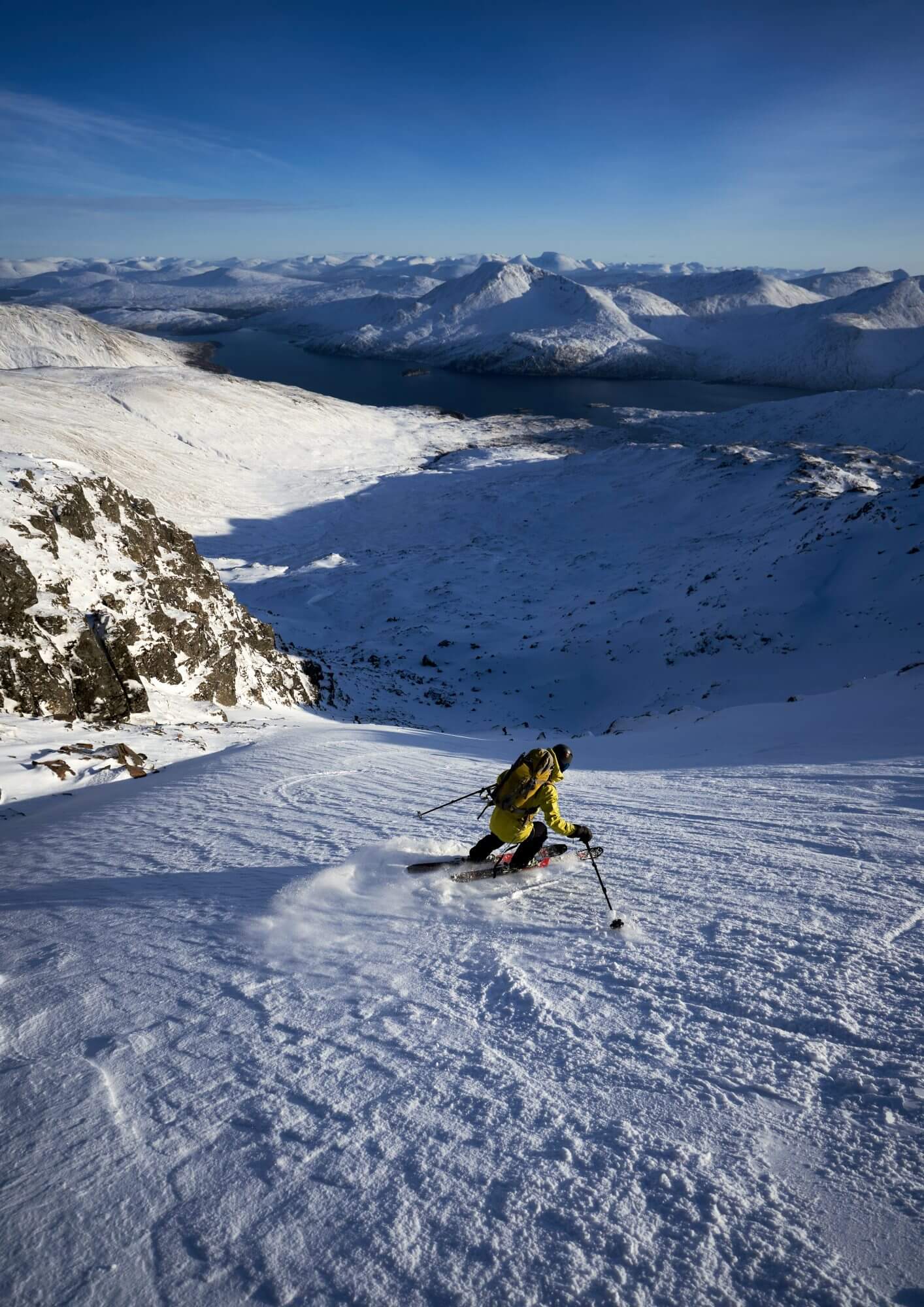 Boots were quickly done up, kit was checked, avalanche transceivers switched on and a short ski carry saw us to the snow line. All around the jagged west coast peaks of Knoydart and SW Ross lay pristine in their winter coat and looking very like a scene from Northern Norway. Perfect snow underfoot was matched by an overhead sun which didn’t just put in a rare appearance but positively beamed down on us encouraging a rapid ascent. A ridge line was quickly reached and the views opened up. Loch Quoich lay far below, to the SE the massive whaleback of Ben Nevis dwarfed surrounding peaks, to the north the Glen Shiel hills glittered in their winter finery and ahead the wildness of Knoydart reared up in a succession of steep peaks and ridges.

Freezing winds which had been on the other side of the ridge now tugged at our clothing and extra layers were quickly donned. Increased exposure to the wind also meant icy patches and sastrugi which combined with the ridge tapering to a narrow spine, temporarily forced attention away from the views to the ground underfoot. The impact of the storm cycle was clear as huge snow drifts threatened to bar our way and care was needed to thread a delicate line through the cliffs. A few final moves around a rocky corner and the summit cone came into view 200m away.  A quick ski across and we were rewarded by one of the finest views in the Highlands. Out west the eye was taken down the sea water fjord of Loch Hourn and out past the spectacular mountain of Ladhar Bheinn to the islands of Eigg, Rum and Skye. The Skye Cuillin sparkled in the distance whilst in all directions snow covered peaks dominated the skyline.

An adrenaline fuelled descent beckoned so lunch was quickly eaten, photos taken, boots cranked up, helmets and goggles pulled on and the best descent lines scoped.

Read the full tale on the Mammut website as Alistair guides his ski touring group to some of his favourite backcountry skiing spots in the Scottish Highlands.