The Bromley-born boarder saw off the challenge of Russia’s Zinaida Vasileva in the girls’ final and secured third place behind Agathe Sillieres and Kim Martinez of France who took gold and silver respectively.

That moment when you win your first European Youth Olympic medal!🏂🥉🇬🇧👍

Soutter, who grew up in Oxsted, Surrey, before moving to the Alps, had earlier narrowly edged out teammate Maisie Hill in the semi-final to clinch a spot to race for the medals before Hill went on to win the B final and finish fifth overall.

The medal comes midway through the Festival, which features 17 Team GB athletes across five sporting disciplines, and Soutter admitted she was overcome with emotion as soon as she finished and was greeted by Hill. 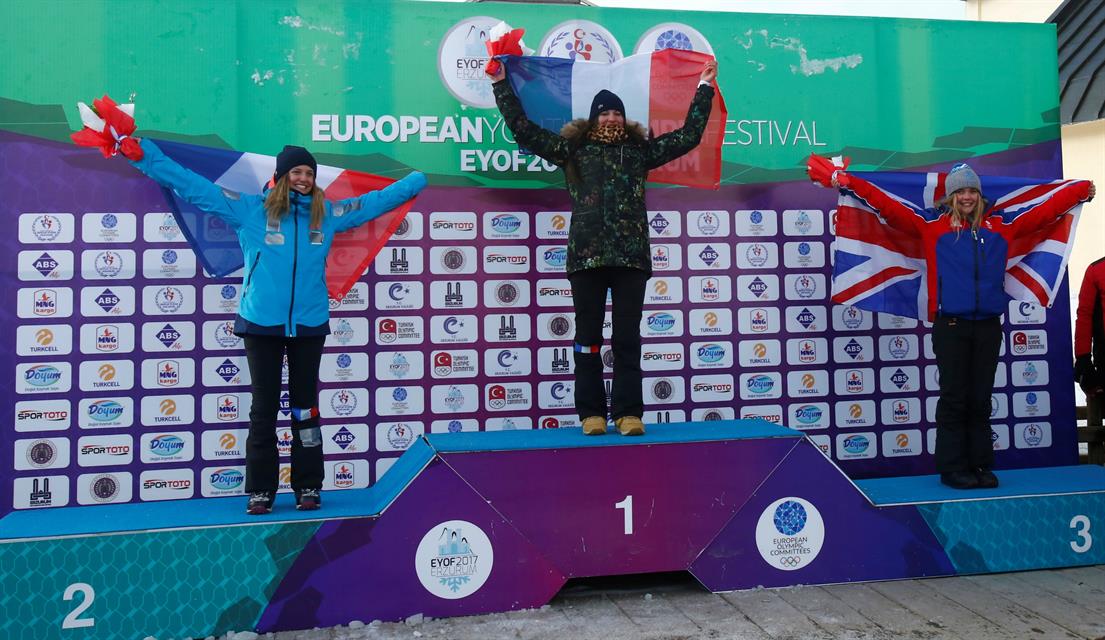 “I don’t think it’s quite sunk in yet,” said Soutter, “I’m a little bit emotional. I cried as I crossed the line. I was just so emotional as it hasn’t been the best season for me and it’s finally on the way up. I even asked my coach to put snow down my back when I was in the start gate. It helps wake me up so I don’t feel all floppy like a jellyfish.”

“It was so nice to have Maisie at the finish line. The support from the whole team has been amazing this week and it really helps motivate you. I just hope this isn’t the last medal I win for Team GB –  my goal is to compete at Beijing 2022.”

It's Snowboard Cross day! 🏂🇬🇧👌In their own words, here are Ellie Soutter and Maisie Hill introducing the course…

Hill, 16 from Gloucester, said: “I am absolutely stoked today. I never thought I would get that far as boarder cross isn’t my strongest event in snowboarding so it’s such an honour to finish fifth and I’m really happy. I’m so pleased for Ellie – I’m really proud of her. She’s always been really strong at boarder cross, as is the French girl who I know quite well so I’m just really happy for both of them. I know they really love doing it.”

“I sent it a bit big on my second qualifying run as I was trying to go a bit faster so I almost qualified higher up but I was just trying to finish as fast as I could. It was great to win the B final as I love winning those races and I like to sit right down on my board when I cross the line.”

Team GB’s 17 athletes, all aged 15-17 years old, are competing across five of the nine disciplines at Erzurum 2017; alpine skiing, cross country skiing, figure skating, short track speed skating and snowboarding – with the Festival set to run from the 12th-17th February.

Erzurum is hosting the 13th winter edition of EYOF with Team GB having sent athletes to all previous 12 Festivals. In total, nine disciplines will feature at Erzurum 2017, with biathlon, curling, ice hockey and ski jumping completing the programme.

With many of the senior Team GB athletes working on the road to the PyeongChang 2018 Olympic Winter Games, European Youth Olympic Festivals play a crucial role in the development of young British athletes and provides a first multi-sport event experience that helps them along the route to achieving their own Olympic dreams.