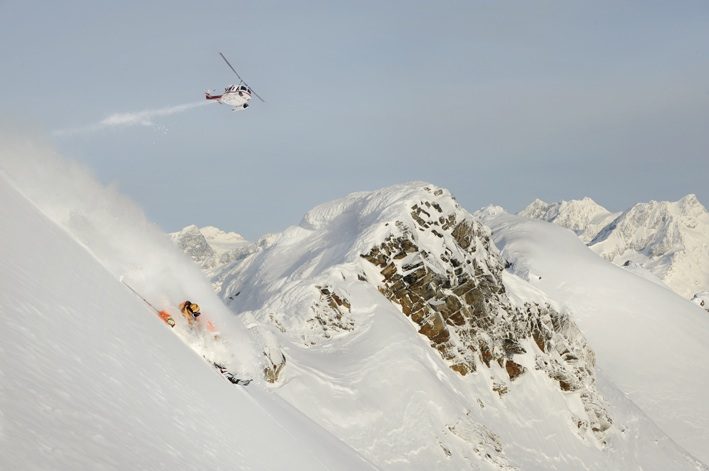 You Too Can Have The Pure Powder Heli-Skiing Dream

Heli-skiing can seem like an impossible dream to many of us. You’ve seen the glossy magazine pictures, perhaps watched a video, but could you really do it yourself?

Most are happy on the piste, but never really see the “wow” factor of off-piste (which seems more like hard work!), and may never have the technical ability to swoop down a slope of deep powder like they do in those ski movies.

“If I can do it then anyone can,” says now-confirmed heli-skier Suzy Small, who made her initial heli-ski ascent 5 years ago making her first turns on light fluffy Canadian powder, having never before even ventured off-piste, nor having ever really progressed past that infamous “intermediate plateau”.

“Ideally we wouldn’t recommend doing what Suzy did, and we don’t send out beginner skiers,” says Charlie Brooksbank of specialist London-based heli-ski travel agency Pure Powder. “We know our market, and we pride ourselves on talking to every guest before they book their trip ensuring they’re going to the right area, on the right programme for them.”

“But fear of this ‘extreme sport’ is a myth we are constantly trying to put to rest. Anyone who is a good intermediate level piste skier or above in the Alps can have a blast heliskiing,” adds Brooksbank.

While many have failed to get the powder bug rattling over wind-blown slab, or cutting through cottage-cheese-like snow in the Alps, Canadian powder, the stuff that the helicopters lift you up to, is light, fluffy, and almost weightless. Equipped with wide skis it’s a magical experience, almost like floating – one which intermediate level skiers who have never even ventured off-piste before can quickly master. Better skiers will, of course, find it easier still.

Pure Powder, who is the UK’s most experienced and largest heli-ski specialist, run exclusive off-piste skiing powder development trips to Europe for those who’dlike to test the water first. Otherwise, CMH Heli-Skiing run specialist Powder Intro trips designed to introduce novice off-piste skiers to deep powder skiing. Skiing with like-minded skiers on skis the width of snowboards, plus video tuition, can do wonders for your skills, but more importantly, confidence.

It is good to be fit before you go though in order to really enjoy your heli-skiing experience, and Pure Powder has created its own ski fitness programme, with the help of Craig McLean who runs the Putney Chiropractic Centre (and is an avid ski enthusiast). This can be downloaded free of charge from the company’s website.

> Canada – Where It All Began

The 2015 season marks the 50th anniversary of heli-skiing, originally pioneered by Austrian mountaineer Hans Gmoser who had emigrated to Canada 14 years before. Gmoser’s apparently fanciful idea was an almost instant hit, and the company he had founded in 1959, Canadian Mountain Holidays (CMH), launched its heli-ski division in 1965. Within 3 years the original Bugaboo lodge, with accommodation for 35, had opened. This would prove to be the first of many, as Gmoser pioneered heli-skiing in other famous Canadian mountain regions in subsequent decades. CMH has now grown to be the largest heli-ski operator in the world, while many others have sprung up around the planet. Pure Powder has been working with CMH for more than 35 years.

> It Doesn’t Have To Be Canada

It’s true to say that Canada is the home of heli-skiing. It all started here, and there are probably more serious operators in British Columbia (BC) alone, than in the rest of the world put together.

But there are millions of acres of pristine mountainside to be found at locations ski lifts will probably never reach, but helicopters can, and heli-ski operations have popped up all over the world over the last 20–30 years.

So if you don’t fancy Canada, or if you’re lucky enough to have “been there, done that” (although to be honest if you have you’re likely to want to keep doing it indefinitely), Pure Powder also offer trips further west to Alaska, to Chile in the southern hemisphere during our summer, and also to Sweden.

Of course, heli-skiing does not come cheap, but like the myth that you have to be an expert skier to try it, it’s also untrue that you need to be a millionaire to afford it.

Pure Powder’s Combo Resort and Heli-Skiing trips in Canada offer a full powder skiing adventure, for much less than a week’s full-on heli-skiing. A package, including 3 days of resort skiing and 3 days of high-octane heli-skiing, starts from £2850pp.

Based in the interior ranges of BC, participants have access to some of the deepest, most consistent powder skiing on the planet, and can tailor their package to suit their personal preferences, with a choice of resorts. For the first portion of the trip you choose how many days you want to ski in a resort, and which one you prefer. This can be anything from 2–4 days at Kicking Horse for ski in/out convenience and loads of off-piste, or perhaps at Revelstoke, which offers the biggest lift-served vertical in North America, or even at world-famous Banff/Lake Louise for access to the Big Three ski resorts.

Once you’ve tuned your powder skiing legs you’re ready for the main event; 3, 4, or 5 full days of heli-skiing, with the most experienced heli-ski operator in the world. Heli-skiing in the heart of BC, famed for the driest, lightest, champagne powder, you’ll experience 10–12 drops per day on average, skiing in a group of 11 guests led by your CMH guide.

At the end of each ski day the powerful twin-jet Bell 212 helicopter transports guests back to the lodge to relax, where they can choose to soak in the hot tub, relax around the open fire, then enjoy a hearty dinner with the guides, whilst swapping heli-ski anecdotes.