How did you end up drawn to big mountain skiing?

I started skiing when I was 4 years old at Sunday River and a few years later I got in to freestyle skiing. I was a mogul skier until my early 20s competing in moguls, aerials and, some people don’t know this, but even ski ballet! I did ski ballet because it was on a Monday or a Friday and it meant I didn’t have to go to school…

Then I moved out to Tahoe with some friends who were working at Alpine Meadows so I started coaching there – a little bit of moguls but mostly freeride. When I was at Tahoe I started mostly freeriding. I had some really good friends who pushed me to try a competition for the first time at Squaw Valley. I did it in demo bindings and I almost won! I was winning after the first two runs but on the third run I did the bigger line, landed it and after a couple turns I walked out of my binding, it just popped off! So I got 4th place but I started to think “OK, I might be able to be good at this”.  On my third or fourth competition was when I had my first victory.

You have travelled all over the world to compete, but where is your favourite place to ski and why?

That is a tough question!  It always depends on the conditions but I would have to say the Alps.  The mountains are just amazing, especially after coming from the States. Waking up in Chamonix on my first morning was impressive with all the glaciers. It is like that in every town you go to in the Alps… I’m still so impressed by those mountains.  You don’t need a helicopter to get to the top of those mountains – if you want to have a good ski holiday you don’t need to be out in the middle of nowhere, they are so accessible. I also think the tradition of skiing in the Alps is so special compared to other places in the world.

For many skiers, the terrain you take on on the FWT looks terrifying – are you ever scared before a run and if so, how do you combat this?

Yes!  Ha! Sometimes I am scared. I’ll have those days where I’m nervous because I know it’s something I can do and don’t want to perform badly. Then I’ll have those days where I’ve chosen a line that is quite big and I’m scared. I have to spend a lot of time looking at that area and talk to some other riders that have been through that area or have a lot of experience.  That gives me peace of mind and I try to do my best at researching the area and telling myself “this is possible and I know I can always stop if I don’t feel good when I get in there”.

Sometimes you have to wonder if you are nervous for the right reasons or the wrong reasons.  Knowing when to push your self when it’s right. I have to ask myself why I am scared. If it’s because it’s something I shouldn’t do then I have to take a step back and make a new plan, if it is something I can do then I have to push that fear to the side and know that something is in my ability.

Of course, a huge amount of physical training is required as a professional athlete, but how do you prepare mentally in order to deal with the pressures and the stresses of competing?

I’ve read a lot of books on it. I’ve also been training my whole life for things like this, competing as a kid. It is probably an area I can be better at as we are our biggest enemy – it is a constant struggle. I’ll have days when I feel really confident about my skiing and the next day I feel like the worst skier in the world. I think that’s common in a lot of people and athletes, we are very critical of our own performances. So when I have those days I fight it!  I get back to the point where I have confidence.

I’ve had days the day before a competition where I felt like the worst skier in the world and then I manage to push it to the side and win the contest the next day. It’s not letting your self dwell on that thought and spiral downwards. I’m not perfect, sometimes I have those runs where I’m not in the right head space. I seem to be better at this with filming than competition. I don’t know why but my goal this year is to have the confidence to perform well on the Freeride World Tour throughout the entire season.

I also run ski retreats with Uthrive and this is an area we massively focus on with our guests as our heads are what can be stopping us from skiing at our best. It’s not that our physical ability isn’t capable, its our minds that are telling us we can’t.  It’s just about pushing this to the side and thinking confidently.

You have had your share of dramatic crashes – how do you deal with this, keeping that passion for the sport even after an injury or a painful fall?

I think I’ve been quite lucky compared to a few of my friends! Even though I’ve had these ridiculous crashes I’ve always come out with injuries that I can rehab and come back from – they’re not too scarring physically or mentally. Although I have torn my MCL two times in a one year period. I struggle because I want to continue to progress but I don’t want to injure myself again and in order to progress you’re going to crash and fall.  This is something I’m working on at the moment, it’s not that I don’t have the passion for the sport it’s just trying to manage getting older (laughs!)

Injuries affect me differently than they did 10-15 years ago.  I approach things differently than I would have in my 20s.  The passion is always there, I’m just trying to navigate to be able to let my body keep up with the passion.  But I’m really lucky, I don’t wake up feeling sore like some people. I have body parts that work really good. 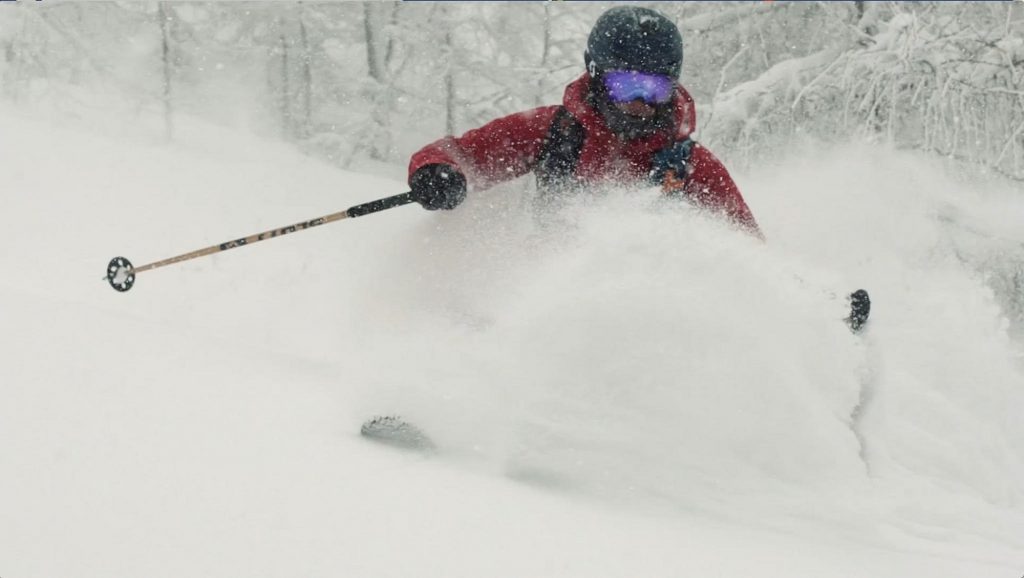 What would you say has been the best moment of your career so far?

That’s a tough one.  I think I’m in the midst of it.  I think it’s all to do with my film Evolution of Dreams that I’m working on. We just started touring and being able to share my story with people is probably going to be one of the things I look back at and see it as one of the best parts of my career. Even though when I watch it I have critiques about it and the injuries I dealt with but I enjoy being able to share with people that it’s not always about showing the perfect side of things, it’s about showing the whole story. The response I’ve gotten from the crowds has been quite special.  So I’m definitely in the best moment right now.

Your movie is named ‘Evolution of Dreams’. As a professional athlete, do you find that your goals and dreams change over time, and how important is it to keep following and evolving with them?

You can’t just have one dream today and have one dream tomorrow. You have to have some kind of follow through to give them a good shot. After some years or a decade you can move on to the next dream. This will be my 10th year on the Freeride World Tour and my dream is to win overall and that hasn’t happened yet but I’ve decided that regardless of what happens I’m going to move on to the next thing and that next thing is – what else is there to skiing? That drive for competition is still there but after this year, my ideas about what I want to do in the sport are changing.

It’s important to always have goals, something to work towards. It’s ok if you put in your best and things didn’t come out as you planned, as long as you tried your best and accept the outcome. For whatever reason, that dream didn’t come true, maybe it wasn’t really what you wanted or it wasn’t meant to be. So the next thing is to find out what you really want.  You just evolve and don’t dwell on the fact that something didn’t work out.

Where do you think your journey will take you next?

That’s a really good question. I’m currently working with Uthrive running ski retreats where I get to share my passion and knowledge with other freeriders, skiers or anyone who wants to give freeriding a go. We get to visit some pretty fun places like Chile, which has some incredible mountains that most people have never skied before. I want to get more into the expedition skiing. I really enjoy getting out in the mountains and going back to a dream I had earlier on in life was to become a mountaineer, before I knew much about mountaineering or ski mountaineering! I’m at a cross roads so I’m figuring out if that is what I want. I want to challenge myself but I don’t think I want to do ridiculously crazy ski mountaineering because I’m not sure if I’m willing to take that risk. So it is just finding that aspect of ski mountaineering I’m comfortable with, challenged but not too challenged. People are pushing themselves more and more these days but my poor mother!! She worries.

How important do you think the Freeride World Tour is in promoting freeriding as a sport?

It’s important because it helps get it out to the general public and makes it something people can understand. I think sometimes it can be confusing as the judging can be confusing sometimes – even as an athletes it’s confusing as it is how an individual interprets a mountain – how do you judge something like that? But it does televise it and shows people a part of skiing that they would never otherwise see or experience. It also provides different outlets for new skiers to come up through out in the world. You have those who thrive in competition so it is a great goal to work towards, whereas others will thrive in other areas like movies or editorials because competing isn’t for them. For some people having this competition legitimises the sport which is a good thing. It’s good to have all these different outlets for freeriders. I hope it promotes the sport in a positive way.