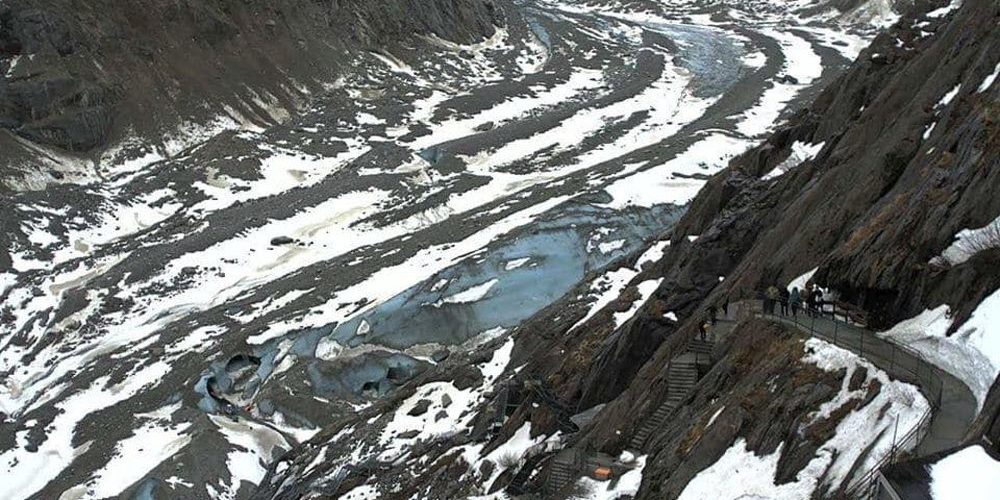 What’s generally regarded as the world’s longest lift-accessed ski run, the famous Vallée Blanche above Chamonix, looks set to lose its status, for a large part of the winter at least, as climate change melts away the Mer de Glace glacier beneath it.

The occasionally 20km long run, with a potential vertical descent of around 2700m, begins from the iconic Aiguille du Midi lift station at 3,842m and runs all the way back down to Chamonix at 1,100m altitude.

However most of the estimated 80,000 skiers and boarders who make the descent each winter have, in recent years, ended their descent at Montenvers, at 1,800m.  So far this winter it’s believed that no one has been able to complete the run down to Chamonix due to lack of snow and a webcam image of the Montenvers section of the run captured last weekend, when temperatures rose well above freezing even at high altitudes in the Alps, leading to rain falling instead of snow, has cast doubt on how long people will be able to continue to ski or board even to here – except when there’s heavy snowfall.

(Descending the arete to the start of the Vallee Blanche descent)

30 years ago there were a couple of steps but since 1990 the glacier has lost over 100 metres of  depth at the Montenvers point and there are now more than 430 steps to climb out. This number grows by at least 10 more steps every year. 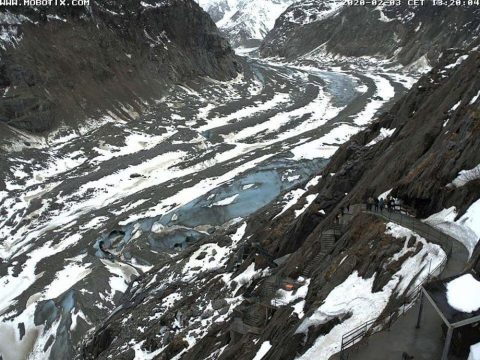 (The Vallee Blanche below Montenvers on 3rd February, 2020)

At Montenvers the glacier has also been home to some ice caves, a year-round tourist attraction for hikers making the return trip by train from Chamonix on the historic railway, and taking the gondola and steps down, but it currently looks like the caves days are numbered.

“To my knowledge, 2020 will probably be the last year they hew out the ice cave. The plan is for a gondola lift to reach a new location 2km further up the glacier, where there will be a new ice cave, but work has not yet begun of this project,” a Chamonix spokesperson commented, adding, “Chamonix is becoming an Alpine laboratory for climate change due to the proximity and easy access to the glaciers. But 90% of the skiing in the Chamonix Valley is about 2000m, so we are a comparatively snow sure destination and more fortunate in this sense than a lot of the lower resorts. This January has been the warmest ever recorded so all things considered, snow cover here is actually very good – between 125cm on mid-slopes and 270cm on higher slopes with almost everywhere open.”

Conditions in Chamonix and the French Alps are being mirrored across the northern hemisphere this winter, with almost everywhere reporting temperatures well above seasonal norms. 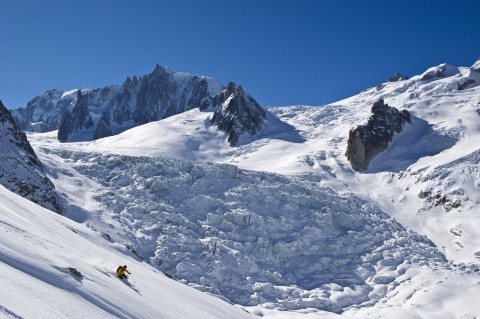 Ski areas across Japan, in Eastern North America and on the Pacific coast, in large parts of Scandinavia and Eastern Europe are all reporting warm weather.  In many places the warmest for decades, or since record began.

The hundreds of millions spent on snowmaking machines by ski resorts in these areas is of little help as the machines cannot operate with temperatures above freezing.

Between the warm spells though there have been good snowfalls in some areas including the Alps, Rockies and Pyrenees so snow cover at higher altitude is actually good and most destination resorts enjoying good seasons with everything open.  Just with unusual rain-storms in mid-winter spoiling the snow cover every now and then. But so far it has snowed again after the rain to refresh cover.

Many smaller, lower-altitude ski areas across Europe Asia and North America are not doing so well.